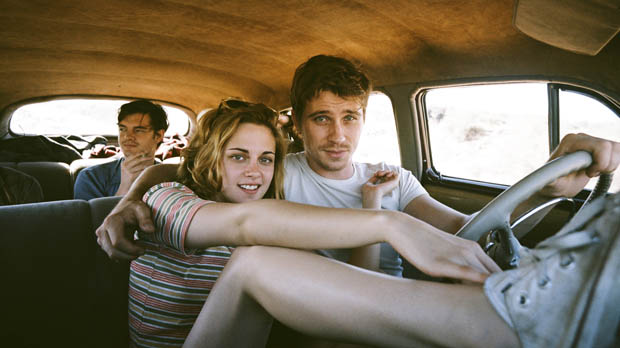 Sam Riley, Kristen Stewart and Garrett Hedlund in On the Road

Long atop the list of the best unfilmed novels, Jack Kerouac’s totemic Beat text On the Road has, after 55 years, made it to the big screen, directed by Walter Salles and with a cast led by Sam Riley, Garrett Hedlund, Kristen Stewart and Kirsten Dunst.

The film’s executive producer, Francis Ford Coppola, originally optioned the book in 1980 and had previously hired such writers as Russell Banks and Michael Herr to adapt it. In 2004, he saw Salles’ biopic about the young Che Guevara, The Motorcycle Diaries — a period road movie about idealistic, politicized young men — and recruited the Brazilian director to crack the Kerouac conundrum.

Salles agreed to take the job on the condition that he also could make a documentary about Kerouac and his Beat cohorts Neal Cassady, Allen Ginsberg and William S. Burroughs, who appear as principal characters Dean Moriarty, Carlo Marx and Old Bull Lee, respectively, in On the Road. The documentary involved four or five years of Salles, as he puts it, intermittently “crisscrossing America in search of the path that Kerouac took in writing the book, meeting the characters in the book who are still alive. And also the poets of that generation, like Lawrence Ferlinghetti, Diane di Prima, Michael McClure, Amiri Baraka, Gary Snyder, who were also very generous and mapped the social and cultural background of the period.”

A pivotal moment occurred when John Sampas, Kerouac’s brother-in-law, offered to show Salles a copy of the “scroll” version of On the Road. (Kerouac wrote the book in marathon benzedrine sessions, sticking numerous sheets of paper together to form a 120-foot scroll he looped into his typewriter, meaning he could type continuously without interruption.) Access to the significantly rawer and more sexually explicit scroll version of On the Road gave Salles and José Rivera — The Motorcycle Diaries writer brought on board to pen the script — a whole new perspective on the text and what Salles calls “the leitmotif of the adaptation.”

As Rivera notes, the scroll version “begins with the line, ‘I first met Dean shortly after my father died,’ whereas the book begins with, ‘I met Dean shortly after my divorce.’ It became very clear to us that the death of the father was a key element in terms of the emotional journey that both of the young men will take, one with a deceased father and one with a missing father.” This focus on absent fathers lead them to examine questions such as “What is fatherhood? How does the road become your father? When do your friends become your father? And, when do you, as an artist, as Sal Paradise [Kerouac’s alter ego] does at the end of the book, become the father of something like a novel?”

When asked what the riddle of the book was that so many other screenwriters were unable to solve, Rivera laughs and says, “It’s hard to say. I don’t know what they were wrestling with, so that’s a tough one. You’d have to ask them. [Walter and I] entered the book with this idea that the road is a teacher. The road is a gateway to maturity, to higher consciousness, to social idealism. We’ve traveled extensively, and we understood instinctively that this was the story we wanted to tell.”

Salles and Rivera’s On the Road is a vivid adaptation that feels very true to its source, but does so without being shackled to specificities. “The first rule of any good adaptation is that you have to consider that you are creating a unique work of art, that what you are writing must stand alone as a discrete piece of work with its own rules, its own ethics, its own structure,” says Rivera. “My approach in writing it had a great deal to do with understanding the context in which Kerouac wrote his book, and the kind of emotional and aesthetic ecosystem that surrounded him. In so many ways [the Beats] were social, political, aesthetic revolutionaries, [so I needed] to understand how they fed each other, how one person inspired each other, how they would have sexual liaisons with each other, how they lived together and fought.”

A cast that was highly invested in the project aided Salles and Rivera; Salles held a “Beatnik Boot Camp” in Montreal to ground actors in the world their characters occupied, which many had already dived into deeply. Tom Sturridge, who plays Carlo Marx, drew on stories about Ginsberg’s love affair with Cassady, which were then built into the film, while Viggo Mortensen (himself a published writer) brought extensive research to his portrayal of Old Bull Lee (Burroughs). When asked about a detail that Mortensen added about Lee/Burroughs reading Celine, Kerouac biographer Ann Charters said, “That scene may not be in [On the Road], but it is so faithful to the essence of the book.”

“Because we’re dealing with a piece of literature that was so influenced by jazz and the idea of riffs and solos and elastic structure, you had to allow the possibilities of unrehearsed discovery, things that happened spontaneously,” says Rivera. “And I think the filmmaking was guided by that principle of this jazz world, and the movie needed to have the same feeling.”