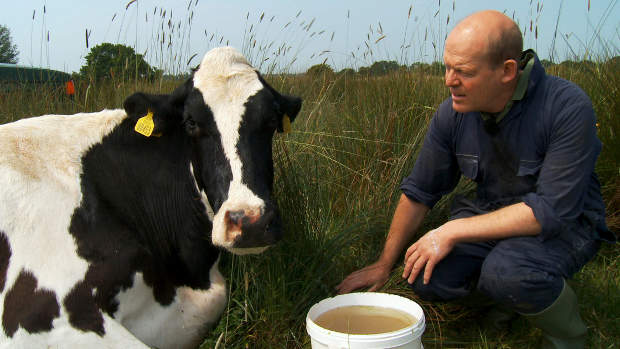 I had a vision for our film. I always refer to it as ‘cow time’, a unique perspective on the world from a chilled bovine point of view. My vision was ultimately sacrificed.

Making The Moo Man taught me a lot about the humble cow. This docile, semi-domesticated farm animal is easy to take for granted. However in reality they’re so much more aware and connected to mother nature than we could ever hope to be. Cows are social, they have friends, they like pop music (although they’re not too keen on dance) and they enjoy listening to the radio in the milking parlour. Many of their idiosyncrasies come across in the final film. However what does not come across is the remarkable peace one feels amongst cows.

The herd of cows in The Moo Man live on a small British farm set above a marsh wilderness. The cows love this marsh and there is an equilibrium between these gentle animals and the slow passage of time down on the marsh. To be amongst the cows very early, as night gives way to dawn is a kind of heaven. As monochrome gives way to colour the mists gather and swirl, then slowly sink to form dew on the sleeping cows. Then, anticipating the first rays of the sun, the animals stir and dew gently steams from the flanks. It’s one of the most serene moments I have ever experienced. I filmed this yet it’s not in our film.

I love this material but it is by nature subtle and slow. I eventually had to acknowledge that this is a film story not an installation or performance art. Movies have limitations. Cows and a summer’s dawn operate at their own true pace. A film’s story-time can only be stretched so far before the elastic band of our suspension of disbelief snaps. And it did snap. Film time and ‘cow time’ do not mix and one of them had to go. Does the film suffer? No, definitely not, but it’s disappointing to give up on a cherished idea of what I hoped film could be.