Family and Sacrifice in A River Changes Course 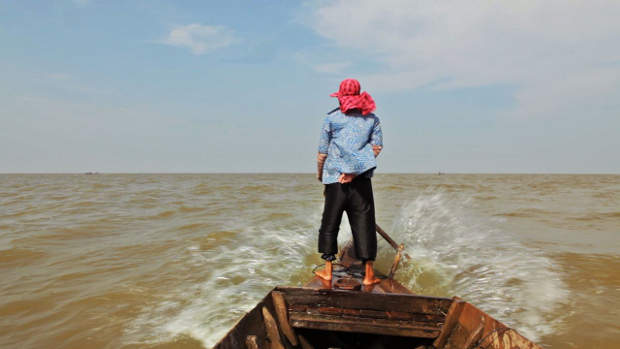 The challenges I’ve encountered in making this film – my struggles to support myself financially, the physical hardships of filming in extremely hot and humid conditions, getting sick in the middle of production, and the strain of being away from loved ones for extended periods of time – were all difficult. But I never considered any of the challenges as acts of sacrifice. At worst, they were inconveniences. At best, they were experiences that emboldened and strengthened me.

On the other hand, the sacrifices made daily by Sari, Khieu, and Sav Samourn for their families are of a depth and nature I’m only now beginning to understand.

I grew up within a traditional Cambodian family and culture in which one never questions the authority of one’s parents. And duty to one’s family takes precedence over duty to one’s self. Growing up, my parents impressed on us the following proverbs: “The fingers on one’s hand cannot function alone.” “One chopstick can break, but the strength of a bundle can resist the greatest force.”

As a child I felt limited by this sense of duty and sacrifice. I was eager to leave home and explore the world and my own unique identity apart from my family. But since making this film – A River Changes Course – I now understand better the complex relationship between family, sacrifice, and self.

The film begins with the startling image of Sav Samourn’s daughter, Cha, cutting sugar cane in the forest. I remember vividly the day we filmed this scene. We followed Cha down a steep hill into a wooded area enclosed by forests of banana trees and sugar cane. And as this little girl grasped the sugar cane in her hand and began chopping, I was mesmerized. I had never in my life seen an eight years old child so strong, adept, and precise.

This image is repeated many times over in the film as we observe young children carrying babies on their backs, digging potatoes for their families, drawing water from a spring, helping their father fish, and cutting fish heads with cleavers larger than their own small hands. These themes are also repeated in the story of Sari, who sacrifices his childhood and education to work on a Chinese plantation to support his family. And in the story of Khieu, who travels to the city to find work in a garment factory to provide for the education of her two younger brothers.

At first, it was difficult for me to understand the sacrifice these young people were making for their families, often at the cost of their own education and future. In the west, we are taught to be independent, to serve ourselves before others, and to demand, expect, and satisfy our own “unique” desires. It was both shocking and refreshing to be in Cambodia and to witness young children not demanding what they felt they were entitled to, but always sharing and contributing with love, towards the survival and well being of their families.

However, the more time I spent with Sari and Khieu, the more I came to understand the complex nature of their sacrifice, which places the family’s needs above their own needs. When I first met Sari at the age of 14, his dream was to go to school, get a job, and provide for his family. By the time he was 17 and working as a laborer on a cassava plantation, his dreams had vanished. For Sari’s parents, it was enough that their son knew how to read and write. It was now time for him to begin work and provide for the family.

Although I respected the family’s decisions, I wondered about Sari’s struggle to fulfill his own dreams – to study, to learn, to see the world, and to express himself as a unique human being, apart from his family.  I wondered if my own struggles as a child were unique to me or whether Sari felt them too.

As Cambodia industrializes and becomes part of the global economic community, I wonder how relationships between families will change. As children move further away from their families to work in the city or seek opportunities abroad, will they inevitably feel less connected to their families? How much of one’s sense of duty and sacrifice to one’s family will be lost, and how much of one’s desire to grow and develop as a unique individual, will be gained? I’m not sure what the answer will be. But I hope, for the sake of Cambodia and for other developing countries seeking to balance the strength of culture and tradition with the force of technology and progress that a balance will be found.

While a hand cannot function without the support of all fingers, it is the integrity of each finger that gives the hand its strength.