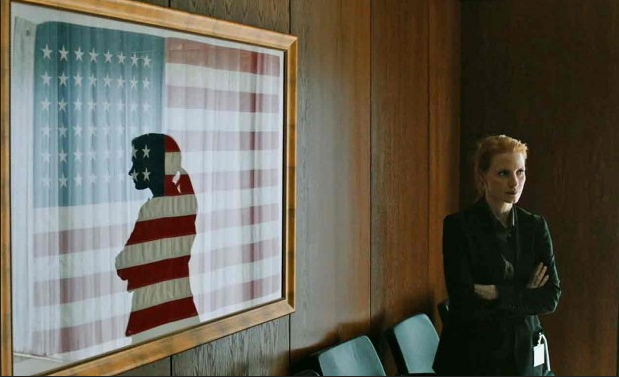 I saw Zero Dark Thirty twice. The first time, the auditorium was nearly full. The second, about a week later, there were only two other people. But both times, the auditorium felt empty, as if, in commanding the attention of its viewers, the film left no room for thought. Whether Zero Dark Thirty endorses torture or not has been much discussed elsewhere, and that discussion and debate has, in its own way, framed the very way we think about the movie.

And yet there is another form of torture depicted in the film and that is the torture perpetrated by history itself. For in Zero Dark Thirty, history has become extreme, excessive, pathological, something no longer controlled by the smooth narratives deployed to make it understandable. History as a zero, in all its absence that leaves nothing but consequences, traces, its very shape an infinite loop. (In his book Zero: The History of a Dangerous Idea, Charles Seife writes that “zero and infinity are two sides of the same coin.”) There is a sense in which characters on both sides of the global war fight not only each other but an awakened, snarling history that is neither plus nor minus. And in this history, thought itself has become a pestilence, a plague. Maya exists at the center of this, appearing — except during the raid — in almost every scene. She registers the audience’s shock at witnessing black-site torture the first time, and then, alarmingly, mirrors us as we come to understand the inevitability of these “enhanced techniques” in this version of history.

“Civilized man has exchanged a portion of his possibilities for a portion of security,” Freud argued in Civilization and Its Discontents. Violence as understood through this lens is the eruption of the suppressed powered by a discontent so strong that the tenuous veneer of civilization — either via force or the more subtle agent of guilt — can no longer keep it in check. But by psychologizing history rather than individuals, Bigelow cuts against the contemporary grain of the memoir as history. The roots of the violence in Zero Dark Thirty are not to be found in the psychological byways of the characters’ minds (we know absolutely nothing about Maya as a human being; she exists more as a machine than a human) but rather in unseen but felt currents of history, and this must account for some of the unease about the film. There is no real “psychology” to Maya, or to any of the characters. Their motives are not personal, but rather work in the service of history, and this makes them terrifying. When, at a CIA meeting, a furious higher-up, George, says, “Do your fucking jobs — bring me people to kill,” his words ring with a hot, burning truth about power rarely spoken in American mainstream films.

What makes the film even more unsettling is that while historical events are its subject, deep history is almost entirely absent. There is no talk of geopolitical motives, either on the part of the terrorists or their pursuers. History remains an ever-present but invisible force, too large to see, to grasp. Jean Baudrillard famously suggested in Simulacra and Simulation that there is no longer a difference between the map (which, covering the territory perfectly in a one-to-one correspondence, is a perfect simulation) and the territory it covers because, in fact, the map precedes the territory. “It is a question,” he wrote, “of substituting the signs of the real for the real.”

But Bigelow’s film is not postmodern. For in fact its subject is the end of postmodernity, a collapse which began with the other collapse, of the towers themselves. Zero Dark Thirty is about how some historical events remain so hot and dangerous that they cannot be treated directly; it would be like staring into the sun. Instead, such histories can only be approached in an administrative, almost bureaucratic fashion, and in such a way that suggests history remains, at the end of the day, a tangle of zero-sum stories, usually competing with each other for legitimacy.

The film comes closest to defining this during the scene where Maya explains her (i.e., the government’s) justification for the attack. There are two Bin Laden narratives, she says: one narrative has him holed up in cave in Tora Bora. This is faulty, she suggests, because it’s “pre-9/11” thinking. The other suggests Bin Laden (OBL) is in a populated area, where he has access to technologies to direct the jihad. The fact that she refers to these ways of thinking not as “theories” but as “narratives” makes all the difference, stressing the fictive element of history itself. And yet there is no scent of irony here, or parody, or meta. In fact, the closest the film comes to meta is the portrayal of the CIA black site interrogators “as” interrogators, and the Islamic captives “as” captives: each side plays its role, and if anything the torture scenes come across as actors’ rehearsals, as when Dan the interrogator switches “parts” easily between torturer and comforter.

We have, in this film, moved out of one symbolic realm and into another. Zero Dark Thirty has absorbed the fractured logic of postmodernity and is perhaps the first major film to depict the possibility of what might come after. The most striking postmodern movies (ranging from Chinatown to Blue Velvet to Inglourious Basterds) channeled history through the filters of pastiche, parody, and deep nostalgia. But Zero Dark Thirty seems a harbinger of a different mode of historical depiction, one where history itself becomes pathological, terroristic, stalking the edges of the frame but ever appearing directly. Zero Dark Thirty — like the tradecraft it is ostensibly about — is itself a series of cloaked maneuvers designed to avoid arousing the attention of history. It cuts against the American grain to imagine that we are not shapers of history, but rather shaped by it. In our collective imaginations, in the battle between choice and fate, choice wins.

Bigelow’s work in Zero Dark Thirty is radically out-of-step with the prevailing mood that favors individual psychology at the expense of historical psychology. The psychotic extremists in her film are not in the shape of individual; it is history itself that is psychotic. Maya’s internal life is entirely absent from the film. There are no familiar back stories to further explain what drives her relentless pursuit of Bin Laden. We know nothing about who Maya is or where she came from. When the CIA Director himself asks about her background she gives him nothing except the fact that she was recruited “out of high school.” In the early 1970s, before she began making films, Bigelow spent some time with Susan Sontag. Several years earlier, in 1968, Sontag published in the pages of the Partisan Review an essay entitled “Godard.” In it, she argued that:

the advantage of the first-person mode for cinema is presumably that it vastly augments the liberty of the filmmaker while at the same time providing incentives for greater formal rigor — the same pair of goals espoused by all the serious post-novelists of this century.

While Zero Dark Thirty is not literally a first-person film (à la Lady in the Lake) Maya’s perspective governs the film until the operation itself, during the last 40 minutes. The fact that even though we as the audience are so closely aligned with Maya’s perspective and yet know nothing of what is happening inside her head must account for a good measure of the film’s radically uneasy tone. It is this absence not only of private history (Maya as devoid of any sort of articulated past) but of public history as well that gives the film its dark glow. As such, Zero Dark Thirty transmits a painful knowledge: that history has, for now, overtaken cinema’s traditional capacity to give it narrative shape.