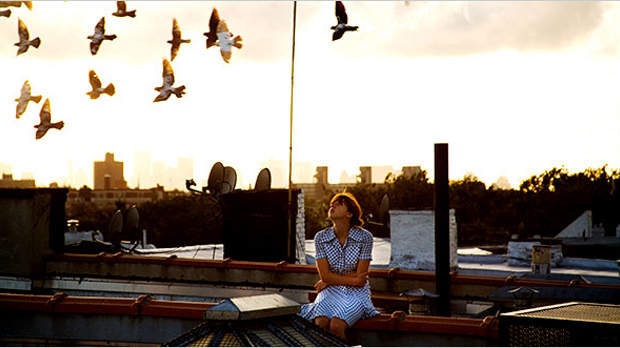 One basic rule of film directing that any beginner is taught is to “not cross the line.” I’m referring to what is sometimes called “the director’s line,” the imaginary boundary that demarcates where the camera can be in a given scene. Simply put, when shooting a scene the camera should be somewhere within180 degrees of a line bisecting the space being shot. If the camera stays on one side of the line, editing continuity is preserved. Actors stay on the same side of the screen as opposed to jumping all over the place with every edit, and the audience is not confused.

Of course, like all rules, the “crossing the line” rule is meant to be broken. The niceties of a spatial decorum are smashed not only by contemporary directors like Michael Bay and Paul Greengrass but also veterans like William Friedkin, who quite purposefully crossed the line in action scenes. In drama too, crossing the line can be effective. It’s been a while since I’ve revisited the film, but I remember Paul Schrader doing it, I think, in Light Sleeper (or maybe American Gigolo). As punctuation at the end of a dramatic scene he jumps completely over on a cut and the actors suddenly change places. It’s briefly startling and serves to underscore the last moment of the scene.

Journalism has its “crossing the line” rules too. I taught a journalism seminar last year and suggested to one of the students that she jump to the first person for the last line of her piece. In her classes she was taught not to use the first person and, especially not if it hadn’t been established from the outset. In this particular case, though, it gave the piece a witty conclusion.

In this “Critic’s Notebook,” L.A. Times critic Kenneth Turan explains his own “crossing the line” moment. In his case, he subscribes to a common but by no means universal critic’s rule of not reviewing the work of one’s friends.

I made the “no friends” rule for myself because through experience I’d come to believe that knowing someone affects how you write about their work. That’s because criticism is simultaneously objective and personal, an examination of your own particular feelings and insights that should be as untainted as possible by anything that is not on the screen. And anything that makes you lose that delicate balance is to be avoided.

While some critics feel personal relationships don’t affect what they write, that’s not been my experience. I’ve even found that meeting filmmakers in the course of writing stories from film festivals, though helpful in understanding creative decisions, can be problematic for reviewing. It’s not that you change your opinion of the film from black to white, it’s that friendship can make you take a little off your fastball, so to speak — make it harder to be as blisteringly candid as you ought to be. That’s why, as an astute colleague of mine once said, when Hollywood wants to influence a critic, they don’t do it with gifts or money, they do it with access to talent.

What — or, rather, who — caused Turan to “cross the line”? Zoe Kazan, star of The Exploding Girl and a woman Turan has known all her life. (She is the daughter of friends Nick Kazan and Robin Swicord.) He mentions that he’s reviewed films featuring Kazan before, but these were films in which she played small parts. “Not only is Zoe the star of [The Exploding Girl], Turan writes, “it was written with her in mind, and she is in pretty much every scene. Writing a review that didn’t focus on her performance wasn’t going to be an option.”

Turan could have kicked the film to another reviewer, or he probably could have just granted himself an exception this one time and quietly covered the picture. But, instead, he “crossed the line” with the piece quoted here for the same reason that directors do: to add dramatic emphasis. And, also, to enlarge the conversation to make it more than this one film — an act has the effect of drawing even more attention back to the film itself.

Finally, though, what got me to break my rule was more than a desire to champion The Exploding Girl. It was the opportunity to deal with the often unexplored area of why some critics choose not to write about the people they know and how I started to feel that there might at times be reasons to do so.

You’ll have to read Turan’s piece for his meditations on criticism and friendship, although these concluding paragraphs make clear that, like the occasional shot to end a scene, this type of “crossing the line” moment is a weapon to be used sparingly.

Even though I’ve broken my rule for “The Exploding Girl,” it’s not clear what that means for the future. More than likely, I will go back to obeying the law — it makes too much sense for too many reasons not to — while reserving the option to go off the reservation if, as with this film, I think circumstances warrant a change.

Was I right to break my pattern and write about this small gem? You’ll have to see it for yourself to know for sure.