Into the Zone: On Geoff Dyer’s Critical Memoir about Andrei Tarkovsky’s Stalker 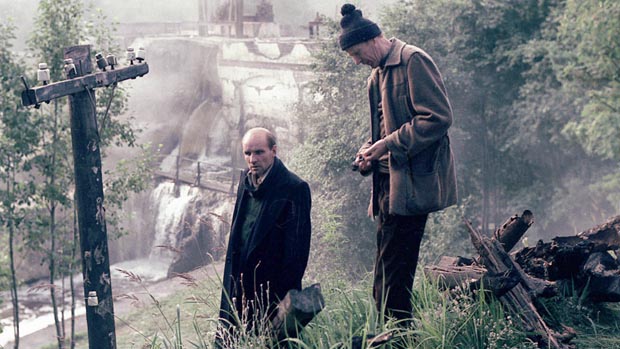 Originally appearing in our Spring, 2012 print issue, my short report on Zona, Geoff Dyer’s fascinating critical memoir on Andrei Tarkovsky’s Stalker is being reposted today timed to the film’s run at Lincoln Center and forthcoming release by Criterion. — SM

My first Tarkovsky film, my gateway picture, was his penultimate, Nostalghia, at the Olympia Theater near Columbia University in Morningside Heights. The seats slanted one way, the screen slanted the other, and there was a leak in the ceiling. Water dripped from the roof into a bucket on the floor, blending into Tarkovsky’s typically excellent sound design of distant dog barks, whirring chainsaw sounds and, of course water — always more dripping water. The opening scene, with car headlights cutting through the fog; Erland Josephson’s self-immolation; the aching austerity of Oleg Yankovsky’s final candlelit walk; Domiziana Giordano’s hair — I was hooked.

Nostalghia isn’t considered the Russian master’s best — although as an Italy-set tale of an artist adrift while away from his homeland, it contains its own critical counter argument — but that didn’t matter. I graduated college several months later, got my first job and went to Tarkovsky double bills every chance I got, which, in those days in New York, was every couple of months. Tired from a day at work, I’d inevitably doze off during these double features and then experience something Raúl Ruiz used to say was a goal of his own filmmaking — the feeling, upon awakening with a start, that I was in another movie. In some cases, I actually was, while in others — like while watching my other favorite Tarkovsky, The Mirror — it just felt that way. I’d see each film three or four times to convince myself that I had absorbed every moment.

Those days — a time when the cinema of Andrei Tarkovsky became its own higher calling — came flooding back to me upon reading Geoff Dyer’s new Zona, subtitled “A Book about a Film about a Journey to a Room.” (Pantheon Books, $24.00) The peripatetic British novelist and essayist has devoted an entire book to a watching of the Russian filmmaker’s mesmerizing Stalker, literally walking us through the movie, scene by scene. Tarkovsky believed the director’s ultimate aim should be to “sculpt with time,” and for Zona, Dyer has played with our temporal expectations of critical writing. He dutifully describes every action seen on screen, a process that leads him to exclaim at one point, “So what kind of writer am I, reduced to writing a summary of a film? Especially since there are few things I hate more than when someone, in an attempt to persuade me to see a film, starts summarizing it, explaining the plot, thereby destroying any chance of my ever going to see it. In my defense, I would say that Stalker is a film that can be summarized in about two sentences. So if summary means reducing to a synopsis, then this is the opposite of a summary; it’s an amplification and expansion.”

Indeed, for Dyer, Stalker is a film for both critical exegesis and life companionship. Treks to repertory screenings became Dyer’s own replications of the characters’ journeys into the film’s Zone, where a mysterious room is said to grant visitors’ hidden wishes. “If it was showing somewhere, then seeing it became a priority, an event that gave shape to the surrounding week,” he writes. “… As was entirely appropriate to the Zone, the film changed slightly, manifested itself differently according to where it happened to be found: the fact that I was seeing Stalker in a tiny cinema in the Fifth arrondissement of Paris — the same cinema, in fact, where I had sat through L’Avventura — made it a slightly different experience to seeing it as part of a Tarkovsky retrospective at Lincoln Center in New York.”

Indeed, despite Dyer’s fears, Zona is far from a summary. Large chunks of the footnote-strewn book venture outside the celluloid frame, drawing in quotes from Tarkovsky’s collaborators, notes from the history of the film’s production and exhibition, connections to other films, artwork and literature, and loads of personal commentary. Referencing Tarkovsky’s Solaris, Dyer digresses into a discussion of memory, cinema and how his wife looks more like Natascha McElhone’s character in Steven Soderbergh’s remake than McElhone does today. In a tour-de-force moment, he springboards from a discussion of the metaphysical questions posed by the Zone into his own life regret, which he determines is his failure to ever participate in a threesome. (An accounting of those missed opportunities follows.)

“The rich, problematic delight with Geoff Dyer’s new book, Zona, is that it’s so much more fun than the film it addresses,” David Thomson opens his review in The New Republic, and whatever you may think of Thomson’s implicit judgment of Tarkovsky’s movie, it’s bizarre that Zona is racking up critical and reader plaudits, being, after all, a summary of a long, difficult Russian film. The strangeness of this success extended to the packed house (500 people!) at a recent five-hour New School symposium on the film, at which Dyer, Francine Prose, Philip Lopate and others screened Stalker and stopped between scenes to chat about it. The screening was from DVD, but, Glenn Kenny wrote at his “Some Came Running” blog, “… even in the subpar projection, and with all the interruptions, the film still maintained a power that is simultaneously spellbinding and deeply disruptive.”

Dyer’s book is a great read, a charmingly digressive take on a monastically focused film, and one certainly doesn’t need to be a Tarkovsky fan to appreciate it. However, in an age averse to, as Kenny notes, “cultural vegetables,” the book will surely be a gateway for others to discover the Russian master, with, hopefully, each each finding their own life equivalent of my post-college days in leaky Manhattan rep houses.