Porfirio — A Hammer To Nail Review 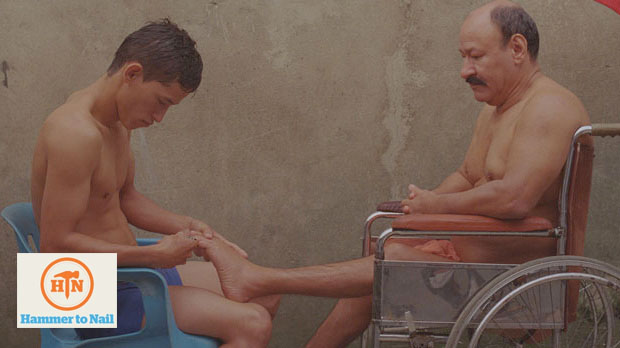 (Porfirio world premiered at the 2011 Director’s Fortnight at the Cannes Film Festival. It opens theatrically in New York City at MoMA on Friday, February 8, 2013. Visit the film’s official website to learn more.)

Though his stylistic vision might superficially call to mind filmmakers like Carlos Reygadas, Lucrecia Martel, and Yorgos Lanthimos, with Porfirio, Alejandro Landes carves a unique path all his own. Based on a too-strange-to-be-true story concerning a Colombian man named Porfirio Ramírez that made headlines back in 2005, Porfirio stars none other than the real Porfirio Ramírez himself. From the very first second that you see Porfirio and grasp his unfortunate predicament — he is wheelchair-bound with shrunken, atrophied legs — you’ll understand why Landes took a major risk in casting a non-actor to star in his feature film. Javier Bardem is great and all, but in cases like these, special effects and “acting” will only get you so far. Though the better news here is that Ramírez proves to be a forceful actorly presence in his own right.

To pitch Porfirio in a nutshell immediately conjures visions of generic, forgettable made-for-TV movies, but mercifully, Landes heads in the complete opposite direction. He makes consistently clever choices along the way, which keeps viewers engaged but a few steps behind. For example, the cause of Porfirio’s physical condition is very discreetly and gradually revealed. The first hint of an explanation, or any context at all really, is when Porfirio tells a traveling salesman that he was “shot by a cop.” But we don’t understand the circumstances. Was Porfirio a criminal and therefore shot for “good” reason? Several scenes later, Porfirio makes a phone call to someone about a “lawsuit,” wondering when and if he is going to receive his expected indemnity payment, which leads one to believe that this shooting was the fault of the authorities and not Porfirio’s, after all. And when it comes to the noteworthy action that led to those headlines, Landes doesn’t tell us what’s happened until after it’s already happened.

Visually, Landes and his d.p., Thimios Bakatakis, use anamorphic cinematography to a different emotional end than most. Instead of “capturing gorgeous vistas” and creating “vast expanses,” they use this wide-but-short frame ratio to make us feel the constant burden of Porfirio’s claustrophobic, locked-down physical and mental state. Even when he’s on the move in his wheelchair, Porfirio’s freedom is constricted. He’s always lower to the earth than everyone and everything around him. For the film’s first 45 minutes, the camera never even moves (and when it does, it’s in a dream).

To help further convey Porfirio’s sense of persistent, rising humiliation and frustration, Landes also takes a different approach. For example, one night, as Porfirio watches television, he becomes mesmerized by the trotting legs of a horse (which is being ridden by a man, who we only see the legs of). The more obvious thing to do here would have been to have Porfirio watching a track meet or something, to have him watching moving human legs. But in this case, the horse’s legs add an odd, elegant touch to this sad moment of recognition.

Perhaps most importantly, rather than wallowing in his anti-hero’s sorry state, Landes injects this story with a much-needed sense of humor. At one point late-ish in the film, Porfirio relocates to a stump while another crippled man works on his wheelchair (the crippled state of this man is a humorous reveal in its own right, but in a sweet, not exploitative, way). After a moment, we cut to Porfirio’s POV, as a random man strolls past, pushing a man-sized penguin-on-wheels down the street. Weird? Bizarre? Funny? All three. Yet, as this man and his penguin pass through the frame, a giant crane begins to demolish the pavement, crushing us back into Porfirio’s sobering reality.

At times, Porfirio is jarringly frank — Wanna know what it’s like to watch a man defecate from a wheelchair? Wanna know how actual sex works between a woman and a man whose legs don’t work? Why, you’ve come to the right place! — yet it always maintains a sentimental, humane spirit. It would be inappropriate to refer to Landes’ film as a procedural, but it does takes its time in order to make us truly feel the constant frustration and degradation that might drive a man to commit a bizarre act of desperation such as this. It also happens to be one of the most startlingly fresh films of this new year.