Michel Gondry, The Thorn In The Heart 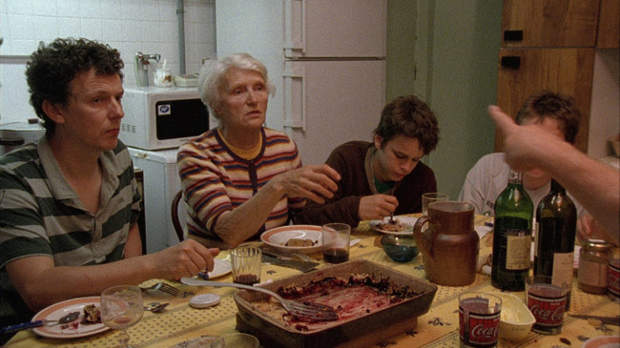 The ever-whimsical and inventive Michel Gondry (Eternal Sunshine of the Spotless Mind, Be Kind Rewind) might have worked with some of the best names in the business, putting his personal stamp on everything from music videos to comedies, TV series, romantic fantasies, and soon, a Seth Rogen–penned reboot of ’60s serial The Green Hornet, but his latest film hews much closer to the heart.

An affectionate and emotionally probing portrait of Gondry’s Aunt Suzette, a schoolteacher in rural France for 34 years, The Thorn in the Heart is a personal documentary in the purest sense of the term, a first-person recounting of life experience that occasionally drifts into a study of family dysfunction. Revisiting the sites where she taught a cross-section of provincial students, some of whom, now middle-aged, she has brief reunions with, Suzette comes across as a salt-of-the-earth matriarch, sensible and good-natured, even progressive in her approach to education. The hitch comes when Gondry begins to press Suzette about the conflicted feelings she has for her fiftysomething gay son Jean-Yves, whose presence is felt more in Thorn’s latter half, exposing a layer of resentment that’s never quite resolved. Shots of Jean-Yves’s elaborate model train set punctuate the film, linking episodes across time and geographical distance. Though simple and stylistically unadorned, Gondry’s genial flair sparks through, as when he recreates a humorous bathroom mishap at Suzette’s home and, in another sequence, outfits a classroom of children in “invisibility” cloaks as a Charlotte Gainsbourg song unspools. It’s a quiet, intimate portrait of internecine dynamics, part Super 8 home movie and part endearing homage to an average but colorful life, with a lingering emotional resonance as it digs gently under the skin of unspoken disappointments.

Filmmaker spoke with Gondry about family, television, real-life stories versus feature filmmaking, and the respect we owe an older generation.

The Thorn in the Heart opens at Village East Cinemas in Manhattan on Friday.

Filmmaker: You seem very attached to your aunt’s side of the family. Were you always?

Gondry: Well, we lost touch a little bit. But I wanted to reconnect with this part of my life when my son was born. It’s a little bit sad in a way, because in the same sense that Suzette doesn’t get along so well with her son, I find that I enjoy the presence of Suzette more than my mother. There’s the family you have and the family you choose.

Filmmaker: Why is that the case?

Gondry: I think my mother has a sort of incurable weakness. She was a great person as a mother, probably way better than Suzette would have been. But as a person now, as a friend, Suzette feels more solid. My mother has been very influenced by spirituality and beliefs that were fashionable in the seventies, which I came to despise a little bit. They were not for me. I kind of turned back to finding philosophies that were much more related to good common sense, which Suzette has.

Filmmaker: She does seem very grounded in that sense. And her experience as a teacher has really informed who she is—it’s such a strong component of her personality.

Gondry: It’s interesting because she had no vocation of being a teacher. It’s just a job she found. But she has what some people might call a rigidness. I don’t think she’s rigid, because I think she’s open-minded for her age. But she has this strength, this idea of sharing stories or experiences, as well as being a good listener, which I guess was in her personality and made her a good teacher.

Filmmaker: Was the idea of filming her and this side of your family percolating with you for a while?

Gondry: Yes. It is your duty as a filmmaker to record people who have had an amazing life. She’s not going to write her memoirs, so her story would just vanish. And it became clear when we started to shoot that the deeper story was about her and her son, Jean-Yves. I thought it was a poem that many parents or family members could [relate to]. And to see that exposed with honesty and kindness would be helpful.

Filmmaker: There’s often something extraordinary about the stories of people who aren’t used to being in the spotlight, whose lives—at least in the entertainment sense—are unremarkable.

Gondry: Yeah, we don’t have too many opportunities to see those lives. We are constantly exposed to the lives of people who are part of a small circle of celebrities. The idea we have of what life is is based on people who don’t live normal lives at all. Maybe not everyone deserves a movie, but anyone is more interesting to me than the person I am forced to watch all the time or some manipulated story by people who do that for a living. I don’t think there’s anything boring about my auntie or this documentary.

Filmmaker: Was it important for you to strip things down and let Suzette’s story be what it was without bringing anything to it stylistically?

Gondry: Let’s say what I brought was trying to dig a little deeper than what she would let me dig, initially. She wanted it to be strictly about her profession. But I realized that it was more interesting when her son entered the picture. Their relationship was what needed to be explored because that’s where the drama was. I thought there are so many unspoken issues that we may as well open that up a little bit and see what comes out. And I think in the long run, even if it has been a little painful at times,  the outcome is extremely positive.

Filmmaker: Did you have any idea that Jean-Yves would becomes such a central character in the film?

Gondry: No, not at all. She didn’t want to talk about him, initially, about the fact that he’s homosexual. And that was a big problem for her, to get her to talk about it. You could see that it was painful for Jean-Yves to hear, but in truth, I think it was a relief. He was in a complete depression when we started the documentary. And I just heard this morning that he introduced her to his new boyfriend and things are getting much better. He is happy for the first time in years, so he was thankful.

Filmmaker: Tell me a little more about Jean-Yves’s model train, because those brief traveling sequences are a really nice way of linking episodes in the film.

Gondry: He had this train when I was a kid. He was a little older than me, so he was like the great cousin who had this magic room with all these weird trains and Lego houses and a bridge made out of glass. So I was influenced by that, in my tests for doing models or animations. I said it would be amazing to recreate the train and use it as a geographical transition, because the structure of the film was to go to every single school Suzette taught in over the years. You realize the train was made by Jean-Yves because he had no friends, which gives a different dimension to all the images. And of course it shows that time passes. That was a good coincidence that he allowed us a simple way to build the structure of the documentary.

Filmmaker: How does evoking a real-life world in a documentary differ from evoking a fictional universe?

Gondry: When you shoot documentary, you record life, the same as you would with a tape recorder. So you have to be attentive and try to be as discreet as possible. But as well, sometimes you need to interfere to get people to reveal [themselves]. And in a feature film, you have to create the moment. But you don’t want to create every moment or else it would start to become a lie. Let it take on its own dimension and then show it the way you would a documentary. It’s the way I see making movies. I learned that by bouncing back and forth between documentaries and other forms of storytelling and filmmaking.

Filmmaker: On a film set, actors expect a director to interfere and give them a sense of what to do, but it’s totally different when you’re interviewing people, not to mention family members.

Gondry: Yeah, because you really feel as though you’re acting the part of a director, and you’re not doing it for real. You have this self-awareness which makes it feel a little contrived. But you have to overcome that, and it takes time, even with people who are not your family. Television is so much in people’s lives that they have a tendency to mimic what they see on television. So when you hear sports critics in interviews, they share the same way of speaking because they live in this closed circle where they get fed by images all the time. When it’s their turn to be in front of the camera, they become exactly like what they’ve seen. This, unfortunately, is the same for everyone because of the omnipresence of television. You have to break that down when you’re shooting a documentary. It takes time for people to forget about the camera and to think of things they didn’t think of [before].

Filmmaker: Are you a fan of documentaries in general?

Filmmaker: So what inspires your flights of fancy when you’re creating fiction?

Gondry: My life, my emotions. Probably literature, because I read. My dreams, sometimes. It’s vast. I’m trying to have a life that’s not completely merged into filmmaking, and to have other sources of inspiration. In terms of what people can expect to see in this documentary, I think there are two levels. On one, there are people who have no interest in me, who know nothing about me and don’t care. I think, for instance, many older people don’t know my movies, but they’ll go and see problems of people of their generation and really identify with that. I’ve been interviewed by a magazine for old ladies, and I really enjoyed this, because it’s not so often that [seniors] see something they can identify with. They are very alienated by pop culture – they don’t think they’re part of it. And I think this film shows, at least in my experience, that this person has tremendous influence. And the other level is people who like my movies. They’re going to see why I am who I am, in a way, because I explore people who were very important in my upbringing.

Filmmaker: Your son Paul has so much of your spirit, so much creative energy. Do you think that he’s come to appreciate what you appreciate about Suzette and older people in general?

Gondry: Yeah, in fact, he’s the one who told me to do this documentary. He is very much like I was. He has respect for everybody and especially older people, which most kids his age don’t have. When Suzette was tutoring him in New York, and she started to tell us her stories, Paul said to me, “Dad, you have to make a film about Suzette.” So not only did he appreciate, he demanded that I do a documentary on her.