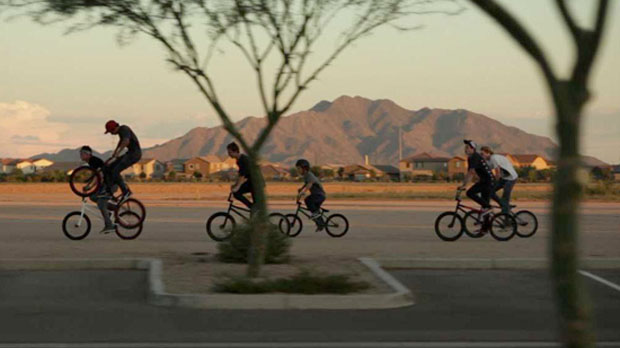 by Scott Macaulay
in Directors, Interviews
on Feb 28, 2013

One of our favorite recent films at Filmmaker and IFP is Tim Sutton’s dreamy and at times disquieting evocation of youth, Pavilion. The film went through the IFP Labs, and its d.p., Chris Dapkins, made our 25 New Faces list last year. And, just this year, Sutton took part in the Venice Biennale College Cinema, which is partnered with IFP, and because of its support, is set to make his new feature, Memphis, this Spring.

As Sutton enters pre-production, Pavilion hits the theaters from Factory 25. It opens at IFC Center in New York tomorrow, and is recommended to all fans of gorgeous filmmaking and those looking for confident new directorial voices. Below I’ve reposted the interview Dan Schoenbrun did with Sutton for Filmmaker on the eve of the film’s SXSW premiere last year. Please check out the film this weekend; Sutton is jetting back from Venice for the Q&As.

Filmmaker has written about Pavilion before, whether to praise its beautiful website or to highlight an interesting merchandising strategy that director Tim Sutton discussed at last year’s IFP Narrative Labs. But what of the film itself – a meditative, ethereal blend of documentary and narrative, united around the theme of youth in transition. Indeed, Pavilion, which premieres tonight in SXSW’s Emerging Visions section, should speak for itself. The film almost feels like a National Geographic or Planet Earth-style glimpse into the secret lives of teenagers; into those quiet, unseen moments so difficult to capture – or for many of us – to even to remember. For fans of Matthew Porterfield, Lance Hammer, or Gus Van Sant’s Elephant; for filmmakers and film enthusiasts interested in where the line between fiction and reality, memory and imagination, blurs, seek out Pavilion.

Filmmaker: In your director’s statement you discuss your inspiration for making Pavilion – as you put it, wanting to find “a realistic way of telling an authentic story about a species and generation we know little about.” Why did you decide upon the medium of film for this exploration?

Sutton: I’ve worked with kids of all ages. I’ve taught filmmaking to five year olds, tutored middle schoolers, worked with high school students in various settings. I’m a father, and so I feel like I understand at least enough about kids’ lives and inner-lives to recognize that they are a total mystery. They’re insecure, sweet, frustrated and, quite often, incredibly intelligent – regardless of whether or not their judgment is the best.

Most kids’ schedules (not to mention their sense of time) are, obviously, very different from adults. That time – the downtime, really – that’s what’s totally fascinating to me. I knew that working within my budget and aesthetic, a very loose and natural approach to the narrative was important. So action was everything (what do these kids do? Where do they go? Let’s just watch). Dialogue, on the other hand, meant nothing to furthering the film. Talk is just talk.

We had no rehearsal. We met the Arizona half of the cast as we were shooting, literally. So the cinematic approach was to allow that inner life to come out by empowering them to be themselves within our frame. This way, the story grew like a vine. Yes, each scene in the film was set up in broad strokes, each aspect of the story produced specifically by design. But inside the frame – our characters are themselves, fully. Certainly Bruno Dumont’s La Vie De Jesus was a huge influence, and that film seems to have been produced on familiar ground. Those kids aren’t acting, but they are following a well-designed story.

Filmmaker: You didn’t work from a shooting script, but instead wrote prose to thematically guide you along the shoot. Can you talk a bit about this process? Did you share these writings with the kids in the film?

Sutton: I had written a number of drafts of a short story so that Chris Dapkins (DP) would understand the kind of story I wanted to shoot, but we never referred to it on set. To be honest, the kids weren’t interested in the story – they were really into making a movie – but they didn’t care about the story and so I didn’t push it. I had three funding sources who gave me complete creative control. So I knew we could make the film in an organic fashion, borrowing from the kind of filmmaking Godard and Wong Kar Wai produced so beautifully.

Filmmaker: Your film drifts from subject to subject, idling through small moments in different lives. Was this a predetermined choice, or did it develop as you shot?

Sutton: The story is about a kid who moves from East to West, from one landscape to another, one parent to another. And within that structure, I felt comfortable finding the different routes to get us through the film, creating the mini stories that would feed the big arc. We would discuss options and ideas and then I would go away and write outlines and key ideas that would be the next day’s schedule. The next day would be a new day. This is a fantastic way to make a film, because nobody got tired of the story or process. It literally would change and grow each day.  Crew members caught on to the strategy and played vital roles in the process – giving ideas, offering me space and time to talk through my own ideas, and just rolling with it during filming. It was totally risky and such a thrill to let things build like that, but I don’t think anyone knew what the film would or could be. It was truly an authentic and engaging process.

Filmmaker: How do you think Pavilion will play to youth audiences? What do you hope they will take away from the film?

Sutton: While I didn’t necessarily make the film with a youth audience in mind, I do think the film connects to teenagers in a really unique way. The teens that have seen it so far definitely feel it is very real and a recognizable measure of their daily life. I think these guys aren’t used to watching movies that are really about them, and of them. They also don’t watch meditative, somewhat meandering art films. But in a way, like Elephant, they love what they see. I think it’s a cool film to them

I will also say – put a bunch of parents and kids in a room and put on this movie and you will definitely have a charged atmosphere. It might be quiet at first, but the movie is not trying to play games with devices or plots or morals or even an overt message. That’s why it’s effective. It kind of leaves parents dying inside a little, as if they’ve spent the last hour spying on their kids. And yet the kids don’t feel invaded or revealed. But it’s not like Thirteen. It’s more of a dream. It’s really something everyone can get something out of.

Filmmaker: Pavilion is very much built around the kids you follow – it’s tailored to their specific personalities and experiences. But I wonder how much you’re in there as well. Were there memories from your youth that you were trying to recapture or explore?

Sutton: It’s a total mix. I will say that one of the best things I feel I did as a director was to NOT make the film autobiographical or overly nostalgic. I really let the kids be themselves; I trusted in them and made the movie about them rather than about me. That also translates to staging half the film out West – where I have no history, no familiarity – where it felt to us almost like a foreign culture on a lunar landscape. That helped us bring a fresh perspective to the youth culture there.

But the upstate New York section of the film is inseparable from my experience. I grew up dreaming on that lake. Those woods are like a secret space to me. I rode bikes all day. My old babysitter plays a role in the movie. So the essential plot is total fiction – the nuances completely born from each kid in the film – but the pure sense of awe in all of it, that’s all me.