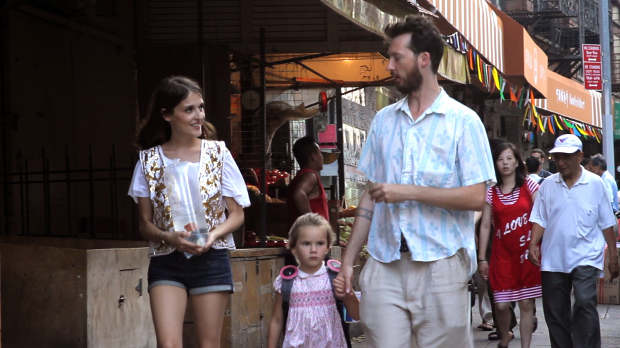 In Ruben Amar and Lola Bessis’s Swim Little Fish Swim, Lilas (Bessis) defiantly flees her coddled Parisian life for a nomadic walkabout in New York. An aspiring visual artist, desperate to strike out from the shadow cast by her famous mother (Anne Cosigny), Lilas falls in with Leeward (Dustin Guy Defa), his wife (Brooke Bloom), and their daughter (Olivia Costello). Quick to align herself with Leeward and his band of musicians, Lilas’ presence as an added distraction for her hapless husband unnerves Bloom’s breadwinning nurse. Amar and Bessis spoke to Filmmaker about the method to their collaboration in advance of their SXSW world premiere.

Filmmaker:  How did you two meet? What was the germination of your collaboration?

Amar: We’ve been together for almost four years, we met through mutual friends… in Tunisia!

Bessis: Ruben was back from New York, where he had directed two short films. I was finishing my cinema and literature studies and writing scripts. We never officially decided to work together, but when Ruben started writing Checkpoint — his last short film, which was ordered by a French national institution — I came up with a lot of ideas. We started brainstorming and I naturally took up writing the script with him. I went along with him to Israel and Palestine and assisted him on the set.

Amar: Working together on Swim Little Fish Swim also happened quite naturally. We had moved to New York: Lola was doing her last year of college at NYU and New School. We were both writing scripts on our own. We were both fascinated by the city and concurrently we started filming our surroundings in the form of short scenes. A common desire to use the energy that surrounded us and make a film out of it quickly emerged: it was a perfect opportunity for us to direct a film together for the first time.

Filmmaker: How do you manage the allocation of directing responsibilities when one of you is acting and the other is behind the camera? Lola, does it force you to precisely delineate your intentions ahead of time?

Amar: Despite the lack of time during the preparation and shooting of the film, Lola and I focused on this aspect of our collaboration. We were aware that directing together could be challenging, and even more so in this case because Lola would also spend a considerable amount of time acting. That is why a important part of our job was to rehearse almost daily the events that would take place on the next day of shooting, so that we could anticipate as many problems as possible and solve them beforehand.

Bessis: Our bond enabled us to understand one another easily enough. Although we didn’t agree on everything, we also knew how to find ways to settle our disagreements by combining our strengths and without making any compromises. It is true though that due to the tight schedule and budget I couldn’t afford the luxury of immediately viewing the scenes in which I was acting so I had to trust Ruben blindly, especially as it was my first time in front of the camera. Moreover it would have been difficult for me to direct the actors with whom I was acting as if I was above them when they in fact had more acting experience than me.

Amar: Thanks to our mutual trust and in order to find the right balance, we decided that Lola would be the main director for the scenes in which she wasn’t acting.

Bessis: Although I had little experience, I didn’t delineate my intentions beforehand. I waited until Ruben said “action” to start jumping into the scene. I spent less time than the other comedians rehearsing because I also had to observe and direct them during our workshops. I must have participated in one or two of them but they were less necessary on my part, since the character of Lilas is mostly an observer. When Lilas speaks in her basic English, she always gets right to the point, she is spontaneous and therefore less preparation was needed.

Filmmaker: The movie casts nepotism – hardly an uncommon occurrence in the art world – as a sort of double-edged sword for the young artist. Are either of you speaking from experience, and why did you choose to address such a notion?

Bessis: We grew up in Paris in an artistic environment, and then we lived in London and New York where we shot films. We were always surrounded by artists. Movie-making, just like other arts and so many crafts, can be difficult if one does not have the right networks or contacts.

Amar: We have a friend whose mother was famous for sculpting giant penises. She was very happy with her work, very urbane, and at the same time she was being disdainful towards her son’s struggles to become an actor; I guess their relationship must have inspired us.

Bessis: We think of Lilas as a young woman who used to admire her mother when she was a kid, then wished to become an artist just like her mother in order to be recognized by her. Lilas’ mother protects her and wants to control her life but at the same time she is distant. She talks to her daughter through her assistant. She doesn’t seem to care about her daughter’s aspirations. We wanted to catch a glimpse of Lilas’s life at a time when she decides to take matters into her own hands and to escape her mother in order to become her true self. However, Lilas only achieves part of her goal. After the identification phase, Lilas starts rejecting her mother and turns to a more “underground” form of art, as opposed to the very conventional work her mother creates. But Lilas is still a naive young girl whose disillusion happens as she realizes that talent isn’t everything… unless it’s coupled with boldness.

Filmmaker: You touch upon a lot of familiar tropes in independent film: the man-child protagonist, the aspirational but naive artist, the outcast and overbearing spouse, the nagging (Jewish) family, the imposing stranger, the rejection of concrete identity. Can you speak about your primary influences?

Bessis: I think those themes are often found in independent cinema because they are familiar. Independent filmmakers are young and work in an artistic environment in which it’s not always easy to fulfill oneself and find one’s path. As far as we were concerned, we wished to avoid giving in to sensationalism by focusing on simple situations from everyday life, which felt close to us, either because we’ve lived them or witnessed them.

Amar: I come from a Jewish family who shares common features with Leeward’s [laughs], although they’re more open-minded! We sometimes have to romanticize or amplify some elements in order to turn them into a film, but we really aimed at keeping them realistic at the same time.

Bessis: This film was first and foremost a challenge. It was born from our wish to shoot as soon as possible although we were both writing films whose productions required time and hard work. We set everything else aside and rushed out to buy a camera; we wanted to shoot in a spontaneous and realistic way. We knew we’d have to go back to France for professional reasons only five months later. So we had five months to write the script, get all the pre-production done (come up with a team of actors and technicians, find the shooting locations…) and shoot the film. The most important thing for us was the work with the actors: realism was what we aimed at, and we really wanted to involve the actors in the writing process. Coming up with a dialogue-free script took us only a month: it was a simple and realistic plot to which the comedians could relate and which would leave us enough leeway to work around.

Amar: Indeed, what mattered to us the most was the performance! Our forthcoming scripts are very different from one another: some stories are more complex and original, but for Swim we really wanted a simple plot that would enable us to improvise and allow the comedians more freedom in a nevertheless established structure.

Filmmaker: You have a lot of great musicians involved in the movie, both on screen and below the line. How significant was their involvement in setting the tone?

Bessis: We agree, they’re amazing! We discovered Penn Sultan’s band Last Good Tooth during a concert in Brooklyn some time ago, even before coming up with the idea of Swim Little Fish Swim. We’re huge fans, so we naturally asked him to write the secret song that Leeward writes for Mary.

Amar: Mary’s song is quite special, it’s a romantic and moving one. As for the other songs sung by Leeward and his friends, we wanted something lighter, more childish – songs that would reflect Leeward’s somewhat zany man-child nature.

Bessis: Incidentally, we were inspired by a real-life musician for the character of Leeward. He was another guy we heard playing during a concert in Brooklyn. We were immediately intrigued by him because he seemed to be living in another world. His girlfriend was attending and we started to imagine what their lives were like.

Amar: While we were casting musician extras for a party at Leeward’s, we came across a band whose name caught our attention: The Toys and Tiny Instruments (Colin Summers and Alec Betterley). Our character makes self-playing instruments with his daughter’s toys, which we took as a sign! When they started singing and playing the ukulele, we knew without a doubt that they would not only portray Leeward’s friends, but also write his songs! They managed to create a musical atmosphere that perfectly matched the character’s personality. Colin also became Leeward’s “voice” for Dustin was neither a singer nor a musician.

Bessis: As for Candace Lee – a young singer who had not yet turned 16 – she was nothing short of a miracle! When the musician who was supposed to play in an open mic bar scene quit the day before the shooting, we posted an urgent ad on Craigslist in order to find a replacement although we were convinced we wouldn’t find one on such short notice. Among hundreds of candidates, there was Candace! We let out screams of joy that must have woken up the whole neighborhood! So Candace played two of her tracks during this open mic scene. A year later, during post-production, we received three new tracks by Candace. And a miracle happened once more. When “Jack and Avery” came out of the speakers, we were so incredibly moved that we knew we had found the song that would end the film.