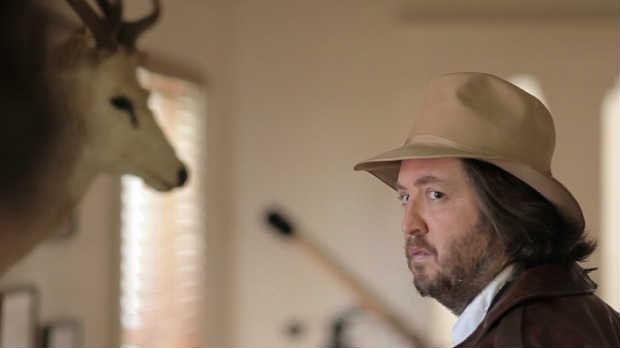 Many musicians have dabbled with movies, but few have stuck it out and become as well known separately for their film work as director/d.p./editor Quentin Dupieux. Formerly best known as electronica artist Mr. Oizo, Dupieux began making short films at age 15. His first two features — 2002’s Nonfilm and Steak — didn’t attract attention outside of France, but 2010’s Rubber introduced him to a wider audience. The film follows killer tire Robert’s deadly road trip across California, beginning with a direct-to-the-audience monologue from actor Stephen Spinella explaining Dupieux’s philosophy of narrative and his bizarre sense of humor. “In the Steven Spielberg movie E.T., why is the alien brown? No reason,” he tells the audience. “All great films, without exception, contain an important element of ‘no reason.’ And you know why? Because life itself is filled with no reason.”

Rubber‘s premise seemed built for the midnight movie crowd, but its execution is closer to the daytime arthouse realm. Shots follow Robert as he rolls on and on, deriving pleasure from shallow-focus tracking shots keeping closely to the tire; inanimate motion drives the camera and the plot. Dupieux’s follow-up, Wrong, also shot in California, is baggier, its sense of humor simultaneously broader and more opaque. It’s the story of unemployed Dolph Springer (Jack Plotnick), who wakes up one day to find that his backyard pine tree has transformed into a Christmas tree and his dog is gone. It transpires the canine’s been abducted by Master Chang (William Fichtner), a mystic/lunatic/visionary who believes in pet/owner telepathic communication, leading Dolph down an absurdist rabbit hole to get his pet back.

Concurrently, Dupieux’s also prepping the launch of Wrong Cops (no real relation, he claims), a bad cop comedy. The eclectic cast includes Eric Wareheim of Tim & Eric Awesome Show, Great Job! fame, Marilyn Manson and Twin Peaks cast members Ray Wise and Grace Zabriskie, a smattering of names suggesting Dupieux’s grab-bag frame of reference. It began with one “chapter” that debuted at Cannes in 2012. That chapter was subsequently put online, then shown with another two that debuted at Sundance this year; plans for a feature-length are in the works. Filmmaker spoke with Dupieux about shooting in America, being his own cinematographer and working in the realm of the irrational.

Filmmaker: You’ve spoken about how shooting in America and English has helped expand your audience after your first films appealed exclusively to a French audience. How do you think of America as a physical place or mental setting?

Dupieux: I have to say it’s more about the actors and it’s more about the light itself, like the light in L.A., the way it’s easy to get sunshine when you’re shooting outside. It sounds stupid but basically that’s why everybody came here a long time ago to shoot movies. That’s one of the main reasons why it is easier to shoot movies here. But then the real decision to shoot here is about the actors. Working with American actors is just super intense and it works well with my world. I’ve now shot four movies here and I’m really used to it. This doesn’t mean I will never shoot in France again but it’s just a great pleasure to work with American actors.

Filmmaker: What’s so pleasurable about working with American actors?

Dupieux: When an actor says, “Yes,” like when they accept the part, you’re pretty sure he’s going to come on the set knowing his lines, knowing the script, and normally they are happy to work. Like I told you, I shot four movies here and I had a very good experience with every actor I met. When they like the script, when they say, “yes,” it’s amazing. They’re super focused, always ready to shoot, and they know the script, they understand the script, they understand what you’re trying to do. It’s like half of the job already because of this.

Filmmaker: Jack Plotnick appears in both Rubber and Wrong. Are you interested in working with a regular ensemble cast?

Filmmaker: In the film, Plotnick works in an office where water’s falling from the sprinklers all the time. There’s a joke like that in Synecdoche, New York as well. Was that an intentional reference?

Dupieux: It’s more about to talk about this kind of boring job where you’re trapped in an office and you do something you don’t like. Instead of talking about the job itself it was just a funny way to show “OK, it is a boring job.” 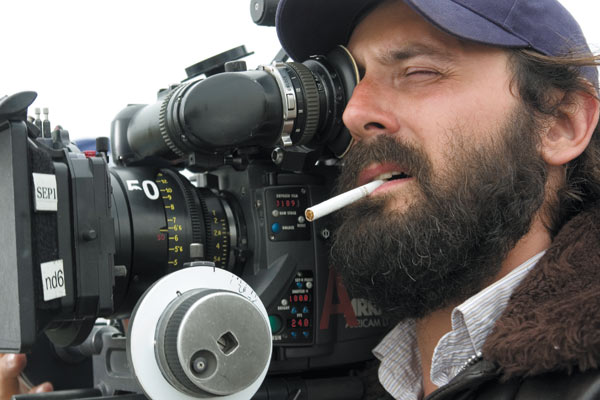 Filmmaker: In Rubber and Wrong there’s a lot of unprovoked hostility and aggression. Do you find that kind of behavior funny?

Dupieux: I think it’s just something that’s exactly like real life. We think we control everything but we don’t. Crazy, unreal things happen every day. We’re just here, like we’re just slaves to nature. We don’t know. We think everything is logical, we think the world makes sense but it doesn’t. When you sit down and look for five minutes, you realize that the world might be more absurd than my movie.

Filmmaker: How much of the unconventional release for Wrong Cops was your idea and how much of it came about because of outside strategizing and input?

Dupieux: I’m not sure I understand your question, but I’ll talk about Wrong Cops and maybe you’ll get your answer. We shot the first chapter, the first 30 minutes with Marilyn Manson. It was not supposed to be a movie, it was supposed to be a small short film to promote my music. But then we loved it and everyone was so excited about it we decided to shoot more. But then I realized if I shot seven more episodes it would be a movie. It became a movie; it’s a chapter movie but it’s a movie.

This came from the energy; I was really into this project and I was super excited by it. I was writing the chapters in two days. We needed to move forward and we needed to shoot it straight so it was really fresh and really exciting, without thinking about the strategy too much. Then we went to Sundance to show three chapters and slowly the movie is growing and people know the movie is about to be out very soon. We never tried to have a big strategy of communication. It came naturally and slowly.

Filmmaker: Acting as your own cinematographer, is there any particular reason you’re drawn to shallow-focus compositions?

Dupieux: I have to say I don’t think too much about this. Usually I just do what I feel. I’m always doing this so I assume it’s something I like but I can’t explain why, it ‘s just my eye. I’m framing and using the camera myself, that’s just the way I like to see.

Filmmaker: Would you consider hiring someone else to act as your cinematographer at some point?

Dupieux:: I’m just doing all these things because I love to do this. Like I have said many times, it’s easier to do it yourself instead of talking to someone and asking them to do it. I have experienced some shoots when I started where I was surrounded by people. As director, you spend your day explaining to the crew, to the d.p., to everybody what you want. I got bored of this and that’s why I’m doing everything myself because it’s just the best way to do it. If something is bad you can’t complain, you can’t yell at someone, you did it wrong. That’ s my job to make it good and i don’t want to ask someone else to do this. Also I hate to wait for lighting. I just can’t work with light.

Filmmaker: You’ve spoken about writing instinctively and not worrying about explanations too much. Do people complicate your films too much when trying to interpret them?

Dupieux: I actually enjoy when people dig and find some meanings in my movies because of course I think Wrong complains about a lot of stuff related to real life and real emotions. So I quite enjoy when the audience is trying to find stuff here. The funny thing is everyone finds something different and that’s really interesting because the movie is open. The movie doesn’t tell you how to feel, the movie is just open and you have to work a little bit. What I used to say during Q&A’s is “If you don’t like it, it’s your fault” and I really think that. You can decide to watch this like a really boring indie weird movie, but you can also decide to watch under it and to see the good side of it and suddenly you see something different.

Filmmaker: The “no reason” monologue seems to apply to your work in general. Is that the case, or does it only apply to Rubber?