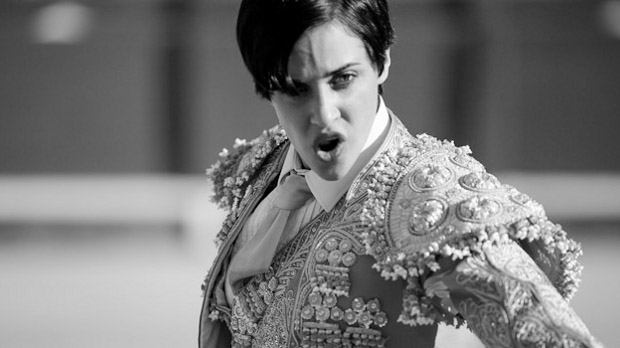 If two recent adaptations of the “Snow White” tale offer any indication, the film industry takes the modern revisionist’s pleasure in applying its cutting-edge tools to the creaky joints of bedtime stories. But Spanish director Pablo Berger swerves away from the familiar path taken by the likes of Snow White and the Huntsman and Mirror Mirror. His latest, Blancanieves, is a silent black-and-white film that appropriates more of the old than the new — and yet it feels fresher than the rest. The binary palette is no limitation, rendering the velvety texture of shadows and the film’s gothic sensibility. Berger uses “Snow White” as inspiration rather than template. The pale princess is now Carmen, a bullfighter in 1920s Seville who travels with a band of matador dwarves. The actresses headlining Blancanieves have the expressive dynamism of actors from the silent era: Macarena Garcia plays Carmen, whose goodness beams through her long-lashed eyes, and the terrific Maribel Verdú (from Y Tu Mamá También) is the high-cheekboned stepmother whose grandiosity is both pernicious and comedic.

Blancanieves, which was the Spanish entry this year for the foreign language Oscar, is released in the U.S. today. Filmmaker spoke with Berger about his decades-long interest in making a silent film, his search for actors with that Hollywood oomph, and the challenge of working with bulls — and chickens. 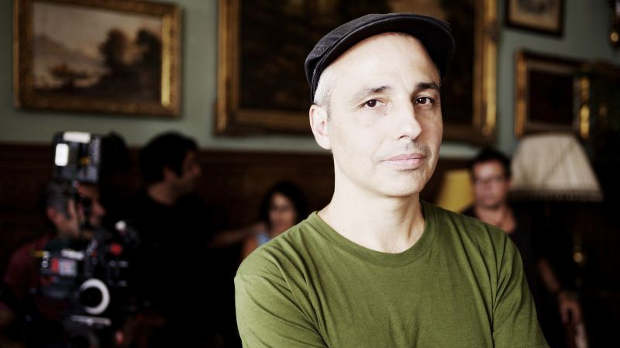 Pablo Berger during the shooting of Blancanieves

Filmmaker: Let’s start with perhaps the most obvious question: why a silent film?

Pablo Berger: It all happened at the San Sebastián Film Festival. I was around 18 or 19. I wrote reviews for some small magazines, and on one of those trips to San Sebastián, I saw Greed by Erich von Stroheim. It was playing with a live orchestra, with music from Carl Davis. That was the first time I had seen a silent film on the big screen, a great classic. I really flipped. I didn’t breathe for, I think, the whole screening, and I felt what I would call “cinematographic ecstasy.” I felt things I had never felt before watching a conventional film with sound. I was already making short films, and I said, “One day, I’m going to make a silent film.”

It took me 25 years — through film school and the making of Torremolinos 73. I wrote a script in 2004, and I showed it to the producer of Torremolinos in 2005. The first page of the script said it was a black-and-white silent film with music from beginning to end. That was when the nightmare began because, of course, my producer said, “I love the script, we can do it in black-and-white, but forget about the silent, this is never going to be released, it’s not commercially viable, it’s just crazy.” I moved onto another producer. Most people thought I was absolutely insane. They didn’t even read the script. It had been about eight years since Torremolinos was released, so who knew it was going to be trendy to make black-and-white silent films!

Filmmaker: On that note, did the The Artist — which won the Oscar for best picture in 2012 — significantly change the conversation about the viability of silent films, and your film in particular?

Berger: Blancanieves was before The Artist, in the sense of financing. Before I started shooting my film, The Artist had its premiere at Cannes, so I had already been through the eight years of hell. But it probably would have [sped up] the whole process if The Artist had opened much earlier. The Artist helped when I was about to shoot, and it’s definitely helping with the release, because the prejudices about silent film are broken and now there’s an audience that’s not scared to pay a ticket to see silent and black-and-white — two words that, if it were not until very recently, would have been killer.

Filmmaker: When you were at San Sebastián, having that moment of cinematographic ecstasy, what was it about silent cinema that struck such a chord in you?

Berger: I think silent cinema requires more effort from the audience. It’s more abstract. There’s space, there’s room for the audience to make out what the actors are saying. It almost has a surreal element — close to a hypnotic act. You get into another world. I think it’s closer to watching opera or going to the ballet, than watching a film with dialogue and sounds. I would say it’s a sensorial experience. It’s more than an intellectual experience.

Filmmaker: As you were making your film, was the absence of spoken dialogue and color a constraint or liberation? Or perhaps these aspects — likely seen as constraints by some — forced you to be creative in ways you wouldn’t have been with a more traditional film?

Berger: When I made my first feature and wrote scripts, I always thought that visual storytelling was the most important part of filmmaking. I would say that visual storytelling is the cake, and the dialogue is the whipped cream or cherry on top — it’s not the heart. I know it could sound pretentious, but I think filmmakers are visual poets. An image is the first thing that comes to my head when I start writing a script. I think about locations and compositions and textures. Always, always, always, if I can say it without a line of dialogue, if I can explain something with action or an image, I will always go in that direction. For me, [silent filmmaking] was natural. Actually, it freed me. I really enjoyed it. And the actors loved to work in a silent film as well, because sometimes they are too concerned about the lines, the beats, so the fact that it doesn’t matter that they say the text exactly how it’s written means that their performance is much more honest, real, and pure.

Filmmaker: When casting, were you searching for particular traits in your actors, knowing that Blancanieves would be a silent film?

Berger: I wanted to make a Hollywood-like film, but in Spain: big locations, big passion, big staircases, a lot of wardrobe changes. I looked for the biggest actors in Spain. Maribel Verdú is probably the biggest star of her generation. In Spain, she’s gigantic. Same as Ángela Molina and Daniel Giménez Cacho. I wanted actors that were iconic. At the same time, I knew I had to get new actors, like the young Blancanieves (this was her first audition and first film) and the teenage Blancanieves (she had worked in TV, but this was her first film). When I cast, I like to imagine a big photo group. Everything has to make sense — not only the leads, but the supporting cast and even the extras.

Filmmaker: Blancanieves blends together elements from stories like “Snow White” and “Cinderella.” Can you discuss your interest in reconstituting these fairy tales, especially since they have been endlessly redone in film?

Berger: The idea to make this film started with a photograph of bullfighting dwarves by Cristina Garcia Rodero. She published a book called España Oculta, or Hidden Spain. When I saw that photo, there was a spark of an idea: I put one character that was missing into the picture, and it was Snow White in a long dress as a bullfighter. I had that image stay with me for years and years. When Torremolinos was released, my daughter was born, and I would tell stories every single day, so I’ve been very in touch with fairy tales. I’m also making the film for my daughter. My previous film dealt with the porn industry, and while Blancanieves is not a children’s film — it’s definitely a gothic fairytale — if you’re a kid, you can watch it. Blancanieves is a tale of tales: you have a bit if “Little Red Riding Hood,” “Sleeping Beauty,” for me there’s a lot of Alice in Wonderland.

Filmmaker: I’ll try to not give too much away, but your film ends on an ambiguous note. Up until that point, the characters and the plot developments felt much more straightforward, particularly in the depictions of the good and evil characters. Why did you choose to end the film in this way?

Berger: I never liked the original ending of the tale. “Snow White” is just three pages, and you can do anything with it. A script is 100 pages, so you can add subplots, new characters, twists — so it’s good to have material like a tale that is very short. For me, in filmmaking or storytelling the element of surprise is key. You have to surprise the audience, you have to surprise yourself as a director because the first audience is the director himself. So that end was kind of illogical and surprising, but at the same time, I like open endings. When you write, there comes a moment when you say: This is it, I cannot imagine any other ending.

Filmmaker: Was there a scene you found most difficult to make?

Berger: The bulls are very powerful, unpredictable, dangerous animals to work with, and they don’t always hit the marks. They’re wild. It was not like what you see in the movie, where they’re behaving like characters — that’s the magic of cinema. You cannot move them with a string. We even had to build this cage when we shot with bulls, to get unique angles.

You cannot train a rooster like you train a dog, but in our movie Pepe the rooster is Blancanieves’s pet, so he was an extremely important character. We had an animal wrangler that lived with one rooster for four or five months, which meant that every day at five in the morning the rooster woke him up. We had six roosters, one of which had spent a lot of time living with a human, so the little girl could hold it, like a Chihuahua in your arms. But on the other hand, it wouldn’t do anything — you can hold it, but that’s it. And in our movie, there’s a lot of things that the rooster does, so we had to use all kinds of wild roosters. Again, the magic of cinema: when you watch the movie, you believe the rooster is really behaving like a dog.

Filmmaker: About Pepe — I’m not sure I’ll be able to eat chicken ever again. [In a scene from Blancanieves, the stepmother kills, cooks, and serves Pepe to Carmen.]

Berger: [laughs] For my daughter, that’s the scariest scene.