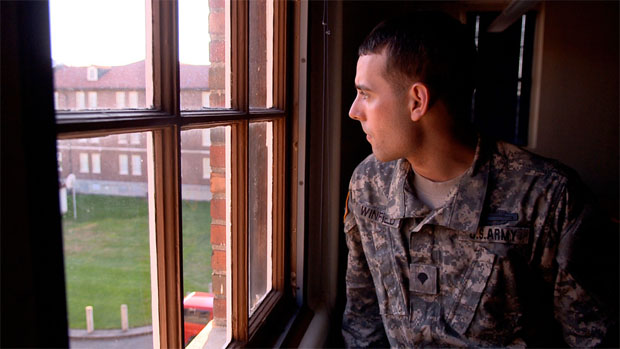 by Pauline Baudon
in Directors, Interviews
on Apr 19, 2013

The Kill Team is a new blistering offering in the ever increasing pantheon of indictments of military conduct unbecoming. It follows the trial of specialist Adam Winfield, whose platoon in Afghanistan started intentionally murdering civilians, branding themselves The Kill Team. In an ironic twist of fate, though a horrified Winfield sought to alert the military via his family and found his exhortations fell on deaf ears, Winfield was immediately indicted with premeditated murder upon his return to the U.S., along with four others in his platoon. Director Dan Krauss’s film, which premieres at the Tribeca Film Festival today, documents the legal tribulations of a whistleblower set against the group whose silent code he decided to break. Here he tells Filmmaker about his foray into the murky ethics of war.

Filmmaker: How did you come to hear about the story of Adam Winfield, and to make this documentary about his harrowing experience?

Krauss: I read a fascinating article in the New York Times magazine in 2011 about the Kill Team trials and was alarmed to discover that one of the accused soldiers — Adam Winfield — was described as both a whistleblower and a murder suspect. I couldn’t understand how this soldier be credited with acting in the moral right and also be charged with acting in the moral wrong. It was clear that Adam had experienced a devastating psychological conflict — both with his comrades and with his conscience. The moment I finished the article, I sent a note to the Winfield family.

Filmmaker: Did you have any interactions or correspondence with the Army, which is notorious for being extremely wary of the way it is portrayed in any medium?

Krauss: The U.S. Army is not necessarily more wary of its portrayal than any other large institution or organization. But it is has the unique ability to clamp down on public information in the name of national security, which is precisely what happened in this case. It was immediately obvious that obtaining access through the Army’s public affairs office was a near-impossibility. Even if I had been successful, my work would be so heavily controlled and mediated that I could never make the film that I wanted to make. So I found a way in through Adam’s defense counsel, initially doing a bit of pro bono video work to get my foot in the door and then leveraging that access to move the project forward. To its credit, the Army’s public affairs unit did help me film training exercises and deployment ceremonies at Fort Lewis, which are key visual elements in the film. But that was the extent of my interaction with the Army.

Filmmaker: It seems like structure is particularly crucial with regards to documentaries, especially when audience members are being asked to ingest a lot of information. Why did you chose the storyline angle of placing Adam Winfield’s trial as the film’s centerpiece, interweaving it with a chronological retelling of the fateful events that got him in the courtroom in the first place?

Krauss: The structure of this film was incredibly challenging. We were working with two forward-moving timelines — the present-tense story of Adam Winfield’s trial and the past-tense story in Afghanistan — as well as one backward-moving timeline about Adam as a young boy. My goal was to juxtapose events in each timeline to create an emotional and thematic resonance between them. For instance, when Adam receives threats from his fellow soldiers in the past-tense Afghanistan storyline, Adam’s father receives anonymous threats in the present-tense storyline; at the same time Adam is forced to decide whether to take a stand against his platoon in the past-tense story, we see him deciding in the present-tense story whether to go to trial or to take a deal. These deliberate juxtapositions helped deepen the film, broaden its scope, and make it feel of one piece, rather than a splintered collection of moments.

Filmmaker: What was your intention with The Kill Team, to simply inform an audience or to make a definitive political statement?

Krauss: Without question, my intention was to illuminate the deeper moral and psychological underpinnings of the story rather than to make any sort of political statement. These sorts of crimes have occurred in war since ancient times, as anyone who has read Homer will tell you. The importance of this story goes far beyond the political. That said, the characters in the film feel deeply betrayed by the Army and have a lot of highly charged opinions. One of the great challenges of this film was to allow the characters to express those opinions without allowing the film to become anti-military propaganda.

Filmmaker: You seem to be interested in the psychological effects of witnessing extreme hatred and violence on a day to day basis, as your film The Death of Kevin Carter focused on the story of a photo journalist in apartheid-era South Africa who was essentially destroyed by the subjects he was photographing. With The Kill Team coming out, do you find that you yourself are impacted by working on these deeply affecting stories? Did you need to step away for a certain amount of time after making those films and forget the darkness, in a sense?

Krauss: My first film had the word “death” in it and my new film incorporates the word “kill,” so clearly I’m intrigued with the dark side of the human psyche. It’s certainly not easy to delve into these sorts of events, but whatever impact I feel from doing this work is trivial compared to the impact felt by those who experience firsthand the brutality of war.