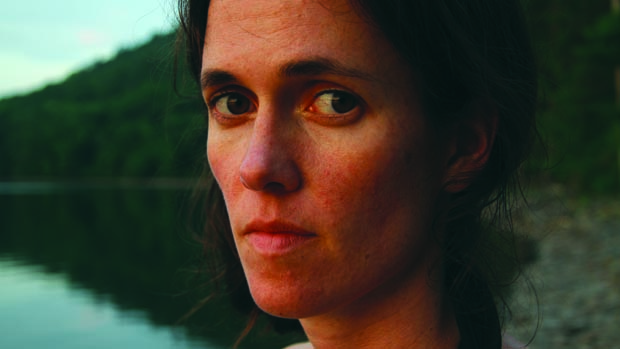 In February 2009, Holden Abigail Osborne’s brother Zach was released from prison and put under house arrest. In grad school at NYU Film School, Osborne grabbed a camera and jumped on a plane to Missouri. She wouldn’t understand why she had done it until the short film the footage became was completed. “It was my form of intervention,” she says.

The result was Solitary/Release, a two-part short film that premiered at SXSW this year. Solitary is a documentary about her brother transitioning back into society while under house arrest, navigating a complex reentry into the lives of his family after serving time in prison. Release is a narrative starring James Franco as Zach and Holmes Osborne (Holden’s actual father) as Zach’s dad, who has chained him to the ground in a decrepit outdoor living space with a floor of leaves and a hot plate. Release serves as an imagined redemption, a surreal visual metaphor anchored by Franco’s slightly brutal performance.

“I wasn’t sure in the beginning that the two pieces would play together,” remembers Osborne, “but I think the pieces need each other.” Her brother was intimately involved in the process. For Zach, “the movie is heartbreaking, in that it reminds him of how powerful a challenge he faces, but also hopeful, in that it points towards the possibility of a new life.” The film will play a host of festivals around the country, but more important for Osborne is touring the film to addiction treatment centers. “One of my initial goals with the film was to start a conversation in my own family about how we could take control of an extremely difficult problem,” she says.

Holmes grew up in tiny Bates City, Mo., and studied government in college, thinking that she should focus on a stable career. On a whim, she auditioned and was cast in a play with Sam Shepard, and soon she was making films. An editor on PBS’ The Quiltmakers of Gee’s Bend and head producer for Wieden + Kennedy China for a year, she has one year left at NYU. Another short film and two features are under way. Without being didactic, all of them have larger issues at stake than your standard boy-meets-girl fare. “The only way that I can justify being a filmmaker is by telling stories that have a purpose, by making films that have a life beyond the screen. I think this little life we’re all trying to live can be just so excruciatingly difficult, so I make films to shine a little light; to let people know they’re not alone.” — A.V.C.