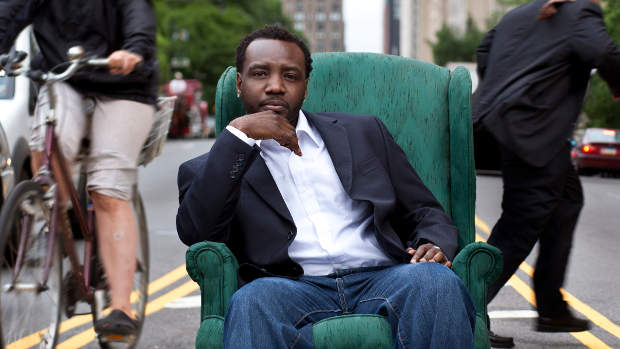 Asked when he realized he wanted to become a filmmaker, moments quickly came to Alrick Brown’s mind. The first time was while taking a summer course in college on Hitchcock. Another was when, while substitute teaching at a middle school in his hometown of Plainfield, N.J., he realized the only thing his kids paid attention to were movies and music videos. But the defining moment came in the early 2000s during his time in the Peace Corps when he was brought to the slave castles in Ghana. Setting foot in these atrocious landmarks, Brown realized what his calling was.

“I had never touched a camera before,” Brown says, thinking back on that moment in Ghana. “But I just tried to add up all the things I’d done in my life and what I’d do next if I had the chance, and filmmaking was the answer. So I started applying to film schools.”

With a B.A. in English and a master’s in education from Rutgers, Brown has always been a teacher at heart, but with filmmaking he realized that the world could become his classroom. He was accepted to NYU’s Tisch School of the Arts and immediately embraced political and social content in his shorts. His The Adventures of Supernigger meshed superhero fantasy with the shooting death of Amadou Diallo (the making of the project was featured in IFC’s 2004 reality TV show Film School), and his thesis Us: A Love Story, looked at domestic violence.

After earning his master’s from Tisch, Brown continued making shorts while consulting for other filmmakers. One of those people was Ishmael Ntihabose, a Rwandan filmmaker who was trying to make a feature about the 1994 genocide that occurred in his country. “We were e-mailing back and forth through a Peace Corps contact for several years,” says Brown,” “and when I got there I realized Ishmael needed a lot more than just consulting to pull this off.”

Brown, 35, offered to write and direct what became the Sundance entry, Kinyarwanda (it was also part of the 2010 IFP Narrative Lab). Shot in 16 days in Rwanda with mostly non-actors and a shooting budget around $250,000, the film looks at the Rwandan genocide through the perspective of six characters — a Tutsi/Hutu couple, a small child, a soldier, a pair of teenage lovebirds, a priest and an Imam.

But the budgetary restraints weren’t the only challenge for Brown. Directing a mostly Rwandan cast and crew, Brown, a Jamaican, had to prove that he was the man for the job. “That’s the part of directing that you can’t teach,” Brown says. “To earn or gain trust, it’s just talking to people and listening. It’s like being a Peace Corps volunteer, going into someone else’s culture and being an advocate instead of an expert. Listening is the key.”

Premiering in the World Cinema section at Sundance this past January, Kinyarwanda won the section’s Audience Award, but for Brown the true test of the film’s success will be when it opens in Rwanda in late July. “The audience I was thinking about [when I was writing the script] was the Rwandan audience,” he says. “It’s their story and their lives.” (Kinyarwanda will screen in the U.S. in November through the African-American Film Festival Releasing Movement.)

Currently Brown is on board to direct Somebody to Love, which was recently accepted into Tribeca All Access, the Nia Long starrer The Mighty Sparrow and an episode of the ABC series Final Witness (which begins airing in September). He also plans to do a thriller based on the late ’70s Atlanta child murders. — Jason Guerrasio