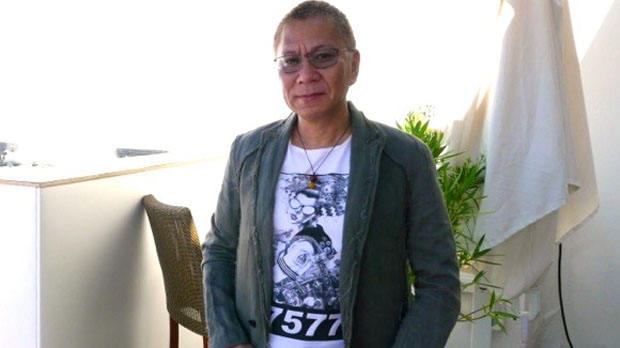 by Ariston Anderson
in Filmmaking
on Jun 3, 2013

Few directors out of Japan are as controversial as Takashi Miike, a man who has been surprising audiences for years with anything from stomach-wrenching horror films to slick yakuza films to happy-go-lucky children’s films, with no less than 70 directing credits to his name. This year at Cannes he surprised fans perhaps more than ever before by premiering his most mainstream film yet, a smart thriller that seems to be begging for a Hollywood remake.

Shield of Straw follows a team of security police who must transport a psychopathic killer across Japan to Tokyo for trial. The criminal in question has a one billion yen bounty on his head, put in place by one young victim’s grandfather. With an explosive highway car chase, a fast-moving train, and a colorful taxi-cab, the police make their way across the country, steadily losing men as they struggle to protect the killer from literally every citizen in Japan out for the bounty, including the majority of their own ranks. The big-budget stunner is a far cry from Miike’s early direct-to-video V-Cinema releases, low-budget straight-to-video films that taught him how to make the most of a gritty bare-bones production.

Yet behind all the special effects and explosions remains pure Miike storytelling, a wild cinematic ride that proves to be an endlessly entertaining look at modern-day Japan, all underscored with Miike’s characteristically dark view on human nature. Filmmaker spoke with Miike at Cannes about what he’s learned over his vast career, and why it’s still important to bring a DIY-sense of filmmaking into even the grandest of blockbuster films.

1. A movie is driven by its the characters, not by its special effects.

What I felt with Shield of Straw was a sort of rekindling of my love of actors. I felt newfound respect for the actors, and I think we can achieve fine cinematic expression without big aerial shots with helicopters and hundreds of police cars. It made me want to just observe, or shoot a film like one is observing an actor in a performance. And then, obviously you can layer that with CGI and have elements that can adorn the film, such as helicopters and police cars, but it’s really about the actors.

2. Pinpoint the images that will drive your story.

If I’m reading a screenplay or a source material, a couple of images always pop up in my mind. I don’t understand why they do; sometimes it’s just a man who’s standing there on his own, who turns around and smiles. With Shield of Straw, that was the last sequence when the criminal turns around and smiles. I had that visual when I read the novel, and I was ready for it in my mind. And I don’t know why exactly, but I try to find ways that would lead to those images that are in my mind. That’s my first step in the process.

3. Even bad guys should be relatable.

In Shield of Straw, in real life it’s rare to see that many policemen involved with one criminal. It’s pretty extreme. But in our everyday lives, it’s something that we face, this sense of justice for people who have repressed their feelings, who live lives where they don’t expose their true nature. And that’s something that can be relatable to everybody’s life.

4. Let your excitement shine through the screen.

When I started out, I was working with really small budgets, but it was pure joy to make films. I truly enjoyed it, and I was okay without any sleep. And that kind of excitement, you can lose that a little when you become too familiar with it. And right now just my approach and what I feel about filmmaking itself has returned. I really, truly enjoy making films and seeing the cast and the crew enjoying it as much as I do. And through writing and editing, and the actual shoot, I think it’s layered over that joy that everybody involved has, and it’s how you make a truly entertaining film for the viewers and spectators as a result. Before that, I told myself not to chase after the illusion of trying to make a film that has broad appeal and is entertaining for everybody.

5. Don’t cry over missing funds and resources. Get creative.

Those who are making films in Japan are of course complaining about how small the budgets are becoming, because they’re decreasing every year. They’re very disappointed with the environment. But we, who started out with V-Cinema, we come at it with a different approach.

In Japan, there are only 15 police cars in the whole country that you can use for cinema. And if you’ve seen the film, you see that there are a lot of police cars. And so we went to an auction for cars, and we bought secondhand cars and we painted them with our hands to make them look like police cars. And then we had to borrow patrol lights to put on top of them.

And so, instead of lamenting the situation, we positively took that and tried to do what we could with what we were given. It’s about how creative you can be if you don’t have a budget. It’s how to use whatever resources you have. And that also is a reflection of that person’s way of living, I think, that also creates the difference in each filmmaker’s filmmaking.

6. Each generation learns from what was missing in the one before.

Realistically speaking, I cannot fund a feature film. Even if I want to express something through cinema, I do need the help of investors to make that happen. And if I were a person who could finance my own films by myself, then I could probably have more say, or be able to say more, but I can’t. So I can’t make a condescending speech about that, because it’s not my money.

But there’s another issue when it comes to money: it’s how you use your money. We try to use money, but we tend to be used by money. And that’s of course true with Japan. There’s something interesting happening. Children today, who are 14, 15, are very different in terms of their value system than us. Japanese kids now, what they choose for their clothing, they’re not interested in name brands anymore. They find something very cute that can be made from very cheap fabric. And so there’s a gradual change. But they’re probably learning from what’s lacking in us, and I think that’s how the next generation learns and changes gradually.

7. Find balance within your films.

I just want to be honest with myself when I make films. This film is a very commercial film that was within a small market that is Japan. We had to open 300 screens. That’s a huge release. And so I probably am going to rebound from this process by making smaller films. After having made a film that everybody could enjoy, as a result of that, I’ll probably be making a film where everybody has to puke or be disgusted.

8. Respect the next coming of filmmakers.

I’m not one to give advice. I think cinema suddenly kind of mutates rather than gradually changes. In Japan, when I was an assistant director, the directors of the day disappeared with their studios, the production companies of the day as well. And the next generation after me will probably completely just appear instead of succeed what we do. And I am just waiting for that day to happen and to be just surprised and shocked, in a good way, by what they come up with. And I will probably be stimulated the most if that happens.

Who I find to be God-like in cinema is Bruce Lee. When I was growing up, you know, you’re drawn to the strongest guy, the toughest guy around. That’s what was amazing about him. He wasn’t just a kung-fu star; there was something else about him.

Bruce Lee’s grave is in Seattle so I paid a visit, obviously. And Brandon’s, his son’s grave, was next to his father’s and I was at a loss for words. Kung-fu films are at their core entertainment cinema. It was also a document of that time of what cinema can do, and that’s why he has such a huge impact on me.

10. Find your story from within, no matter whose story you’re telling.

A film tends to document the change or transformation of a person. But in my films, none of the characters change at all. They don’t learn from their mistakes at all. Whatever happens, they don’t learn. It’s about just being yourself. And it’s just organic; it’s just natural for me. Maybe it’s me just trying to explain why I can’t change.