“What Do You Think?”: Pedro Almodóvar on I’m So Excited 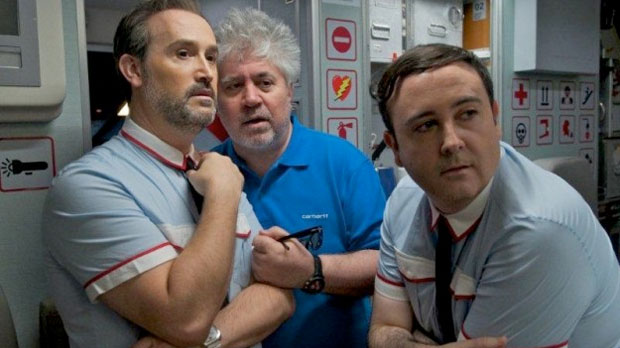 “What do you think?” asks an inquisitive Pedro Almodóvar, his voice hoarse from constant interviews and his white hair characteristically untamed, like he’s the Don King of foreign film. His question is in response to my own, about why he’s fascinated with sex between partners wherein one of them is asleep, a phenomenon seen in Bad Education and the director’s libidinous, screwball latest, I’m So Excited. It’s at once jarring, thrilling, and humbling to have Almodóvar request your thoughts on his creative motives. Perhaps I should have asked him something else, something less tied to the many interpretations he himself says he hopes to elicit with his films. But this is not a test. The brilliant auteur, whose movies’ mad irresistibility seems somehow contained in just how teddy-bearish he appears, is genuinely curious. I take the bait, saying I know his work well enough to presume the sleep-sex fascination goes beyond some mere fetish. And Almodóvar’s own perspectives do not disappoint.

“It’s true, and I am conscious of this fascination,” he says, using the aid of a translator while also shifting from Spanish to English. “ In Kika, the protagonist is speaking to someone whom she thinks is dead. And in Matador the protagonist prefers that the girl he’s having sex with pretends to be asleep. I think that some of it has to do with the fact that men and women alike actually understand the other person better if the other person is silent rather than engaged in dialogue. I think it’s the best kind of communication, because people are never going to totally understand each other. I love the idea that you are dreaming and someone comes into your dream. One character here may be dreaming that he’s riding a horse, or making love to a beautiful woman, and he thinks it’s all in his dream, but it’s really happening. What really draws me in is the interchange between two kinds of distinct spaces: Reality and the dream state.”

If the airplane-set I’m So Excited were a dream (and if I may be so bold and uninhibited as the film itself), it’d be the sort that would leave you needing to change the sheets. A dizzyingly sexual lark of a comedy, and Almodóvar’s fizziest film to date, the movie goes down with the mood-lightening and belt-loosening ease of the mescaline-spiked Valencia cocktails its lead characters guzzle. As has been widely reported, I’m So Excited is a throwback to the sort of telenovela-tinged comedies the director hasn’t made in years (think Airline Passengers on the Verge of a Nervous Breakdown), but it’s also deliberately evocative of an era — an era marked by everything from that special drink to the titular Pointer Sisters tune, which, in the film’s centerpiece scene, is performed in its entirety by a trio of flamboyant flight attendants.

“It’s a return to the kind of comedy that I used to do in the eighties,” Almodóvar says, “but it’s also an homage to that particular period of Spain. It was a moment that saw an explosion of liberty after the death of Franco and the arrival of democracy. And, in fact, as I sat down to write the script, I just sort of quite naturally fell into that same kind of mood, which I would be in when I was writing these very screwball-like comedies in the eighties. The song came out in ’82, and the cocktail is typical for Spain from ’85 to ’87 — part of the Valencia spirit.”

And yet, as much as the film hearkens back to post-Francoist Spain, it also reflects the comparatively melancholic Spain of today, from its divisions of class (everyone in coach, with “economy-class syndrome,” is knocked out on muscle relaxants) to its barren, bankrupt airports and the plane’s inability to land, the lack of an available runway forcing it to circle in torturous uncertainty.

“My first intention was to make a movie where Spanish people would escape,” Almodóvar says, “something that would be completely unrealistic and allow them moments of escape. As I moved along in the writing, and Spain also moved along in the deepening of the crisis, at some point it almost became impossible not to let reality seep in through the cracks. And I think it’s actually a good thing that reality seeps in. If reality comes, I always welcome it. Especially because we have these characters feeling much like the people in Spain are feeling — circling around, circling around, not knowing when they’re going to land or how they’re going to land. Comedy, in some ways, always has to speak to reality. And I think that is very obvious for the Spanish viewer. But it’s also very important for the American viewer, who doesn’t have this background, that the film still be just as enjoyable. At least, that’s what I hope I have accomplished. Otherwise, I have failed completely.”

Almodóvar can rest easy. For all the elements that invite readings concerning past and present political themes, I’m So Excited is, first and foremost, tear-inducingly funny, drawing more belly laughs from this writer than any other film this year, and probably last year too. Though it’s elaborately written in a ratatat string of well thought-out tidbits, like a virginal psychic (Lola Dueñas) who senses doom and a portly flight attendant (Carlos Areces) who paradoxically prays while pining for sex, the film wows most with its breathless comic randomness and its virtuoso slapstick orchestrations, which can leave a viewer feeling appropriately spent. Gleefully unabashed in all its so-called vulgarities (not to mention its no-holds-barred gayness), I’m So Excited boasts the kind of rare shocking hilarity that’s crude, yet highly celebratory; specifically targeted, yet all-inclusive. One particular crammed-cockpit scene, in which characters’ lines start overlapping like comic lasagna (and a bisexual pilot blurts out that his first performance of fellatio made him “retch, like when you shoot up heroin”), is reason enough to own this film for repeat viewings. Additional portions, like a communal sex scene amid a business-class cabin already rife with phallic symbols (even the airline name, Peninsula, is suggestive), drops your jaw to the floor without compromising your ear-to-ear grin. And if it does, you’re still invited to climb aboard.

“The truth is there are always people who can feel offended by anything,” Almodóvar says. “I think the scandalous part in the case of my film has more to do with the gazes and where they look than what’s actually happening. I, of course, am always going against what’s politically correct, and thus, some people might find that scandalous. But in my opinion, any reaction that the film gets just enriches it, and enriches the experience. And any one film can be seen a thousand different ways, and interpreted in a thousand different ways. And it doesn’t always mean, necessarily, that I agree with all the ways it is interpreted, but that’s what makes a film alive.”

I’m So Excited could simply stand as a gonzo metaphor for life itself, with the blissfully ignorant checked out and unburdened by conscious worry, and everyone else doing all they can to distract from the inevitable creep of death, engaging in every possible diversion as they circle in futility before the final descent. It may also be a sort of purgatorial waking dream, like Almodóvar Lost, complete with character backstories, here told via phone calls home—the last tether between life and the beyond. All of this is delivered with a spoonful of sugar — or, rather, mescaline, courtesy of a model-handsome newlywed (Miguel Ángel Silvestre) who smuggled it in his rectum — yet it registers all the same, part of another tale told as only Almodóvar could tell it. Co-starring head-turning breakouts Raúl Arévalo and Blanca Suárez, and Almodóvar vets Javier Cámara and Cecilia Roth, the film is ideal viewing for those seeking exultant entertainment in the wake of DOMA and Prop 8’s defeats, not least because its maker hails from the first European country to legalize same-sex marriage.

“This is something Spain is, and should be, quite proud of,” Almodóvar says, before responding to whether or not he feels his work has played a part in promoting equality. “I can’t tell you whether I was, but I hope I was an influence. I would feel very proud of this if it were in fact the case. In truth, sex is probably talked about more in Spain than it’s actually done. There’s an anecdote about [Luis Miguel] Dominguin, the best bull fighter of his time, who had sex with Ava Gardner. It was an affair, and immediately after finishing the first time, he got dressed and got ready to leave and she asked him, ‘Where are you going so quickly?’ And he said, ‘Well I have to go tell people about this!’”