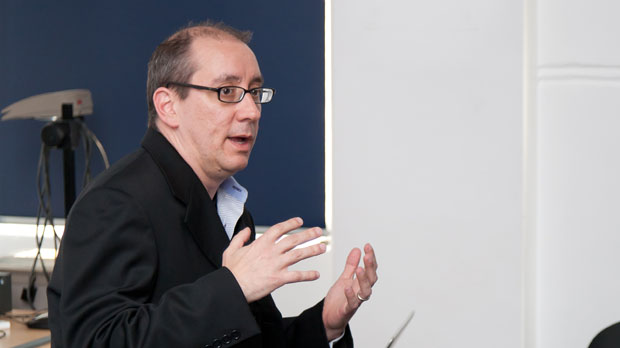 Orson Welles is reputed to have said, “The enemy of art is the absence of limitations.” In film school, these limitations are called assignments, and this issue’s Extra Curricular offers an assortment of assignments designed to ignite the creative process. They’re gathered from a group of screenwriters, animators and filmmakers who teach at schools across the country.

Mary Sweeney, who teaches a course called “Dreams, the Brain and Storytelling” in the Screenwriting Division of the School of Cinematic Arts at the University of Southern California, offers this simple but powerful writing assignment, which can be done alone or in a group:

Choose an image at random, or have someone choose one for you. View the image for one minute. You only have one minute, so look hard, then hide the image and begin writing ideas about the image. Your assignment is to write a three- to five-page scene based on the image over the course of a week.

“The results of the assignment are wonderfully varied,” Sweeney says. “It forces you to source your imagination to create a story, and in doing so, you begin to recognize your own creative voice and how it’s different from everyone else in the room, who are all looking at the same thing.”

This two-part assignment is offered by Eric Faden, who teaches Film/Media Studies at Bucknell University, and asks you to collaborate with at least one other person to explore the creative potential of illustrating an audio track, in the face of several obstructions.

Part I: Both participants record an interview on video with four different people starting with a simple question, such as, “What passion, skill or trait would people be most surprised to learn about you?”

• Practical lights only — no film lights, no reflectors.

• The interviews must be recorded in a busy place during the noisiest time of day for that space.

• Audio quality must be immaculate with no interference or intrusive noises.

• You may (and should) ask follow-up questions for more history, context and detail, but interviews cannot exceed five minutes.

• Interviewer questions or commentary must be eliminated — the interview audio shall consist only of the subject’s voice.

• Select the two best interviews and edit (and mix) them to 90 seconds.

Trade interviews with your partner.

Part II: From the interviews you have been given, choose the best interview and replace the visuals with b-roll footage that illustrates and illuminates the audio interview.

• All footage must be original (no footage of photographs or footage of other videos).

• You cannot edit or modify the audio track in any way.

• You may retain up to 10 seconds of the original video track.

Developed by Maureen Selwood, who teaches in the Experimental Animation program at California Institute for the Arts, this prompt begins by learning about — and listening to — the audio work of artist Janet Cardiff. Then Selwood asks you to create your own audio tour:

Whether you walk or ride, take your listener on a tour of a place selected by you where the time of the journey is real time. Your voice, as well as that of your actors, can be edited, but the feeling is that the event is happening in the present and you are entering the body of someone who is listening to you.

By activating the acoustic, how do we create mythological places and time? Where do we imagine our viewer? How is an audio-tour similar to watching a film? The linear narrative is accompanied by a continuous soundtrack arranged from scripted voices as well as ambient sound. What you see with your own eyes fuses with the audio track and your imaginative faculties to provide the nonexistent image track. The actors’ lines function like voice-over for an absent film, and at times the sounds are the equivalent of a close up, zoom or panning shot. Cardiff affirms the presence of your body and engages all your perceptual faculties in a corporeal way. It is important to keep a high degree of consciousness, but simultaneously you must also navigate a parallel universe of your own imagining.

Selwood concludes by saying that the next stage is often to create a visual piece to accompany the audio track.

This prompt invites you to query your own psyche and was offered by Lorelei Pepi, who teaches in the Film/Animation/Video Department at Rhode Island School of Design:

Everyone has a series of unwritten rules that are important to how they organize their life, operate during a 24-hour period or engage with the world. What are your Top 10 unwritten rules? Write these down, then order them so that the most important is number 1, the leastimportant is number 10. Through the following week, break these rules, deny them and change them. Keep track of your feelings, responses and efforts through a journal that you write in along the way or at the end of the day, every day.

Assignment #5: What’s Real?
Filmmaker Britta Sjogren teaches a directing course in the Department of Cinema at San Francisco State University dedicated to understanding the real. Here’s how she describes it: “This course is organized around a philosophical problem that has probably absorbed most filmmakers at some point in their careers: the ‘real.’ Some filmmakers are very self-consciously obsessed with this problem; others may ignore it or only subliminally address it in their work. No matter what the approach to the real, it is always implicitly at stake in every film. What is the relationship of the real to films and in particular, to the films you wish to make?” She notes that the class will explore the traditions of realism in filmmaking and discuss “the extremes to which filmmakers have gone to preserve, deconstruct, expose or undermine the real (or what they believe the real to be).”
The course includes several assignments, including these two:
• Create a short video project representing human desire. If you represent the human body, do so in a way that is either consciously exploitative or intentionally nonexploitative.
• Document a person, place, process, etc. in such a way as to reveal your bias(es) about it.