The Terror of Free-Fall: A Filmmaker’s Experience at POV Hackathon 4 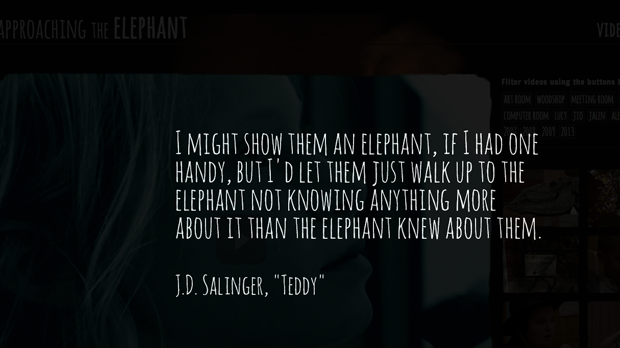 by Amanda Wilder
in Filmmaking, Transmedia
on Aug 2, 2013

When making a documentary the following question tends to arise: what should happen to those extra 238.5 hours of material? After a 90-minute (give or take) cut is locked, what does one do with the pile left on the floor? Do you pick up five or so scenes you’re particularly fond of and put them on a DVD as “extras”? What if you grabbed — or carefully selected, depending on your level of intensity of need to control — a handful of material and constructed an interactive online video explorer or choose-your-own-adventure, allowing people to navigate as they wish, depending on impulses, curiosities and attachments to subjects, places, time periods or themes? This was the idea I came to POV Hackathon 4 curious to explore. Knowing that when my documentary Approaching the Elephant is finished I will have hundreds of cast-off hours, including footage that should be thrown away and cherished moments that won’t find their place in the feature, I set out to build and design a prototype for an interactive website that will allow people to explore unused footage in an alternative way.

Hackathons are intense periods of collaboration during which new projects are built. They induce sleep deprivation, anxiety and inspiration. The night before POV Hackathon 4 I received an email that raised the oncoming level of drama higher. The developer we had been paired with had been injured, making it impossible for her to work during the hackathon as part of our team. We already knew that our designer, the wonderful Sonna Kim, could be there on Sunday but not Saturday. Obstacles seemed to have piled up — were they surmountable? Late Friday night the folks at POV digital and I electronically put our heads together and decided to go ahead. We still had a developer — I had asked Alexander Khost, one of the main subjects of Approaching the Elephant, to join as an additional team member. This was a fun chance for him and I, documentary subject and filmmaker, to work together in different way. On Saturday morning Alex and I arrived, nervous and excited, at Huge Inc. in DUMBO to begin hacking.

What does it mean to edit a choose-your-own-adventure with observational documentary footage? As Alex got about building the functionality for buttons to appear on my video clips that would allow users determine their way, I taped up a messy web of scenes and meditated on how they might connect. 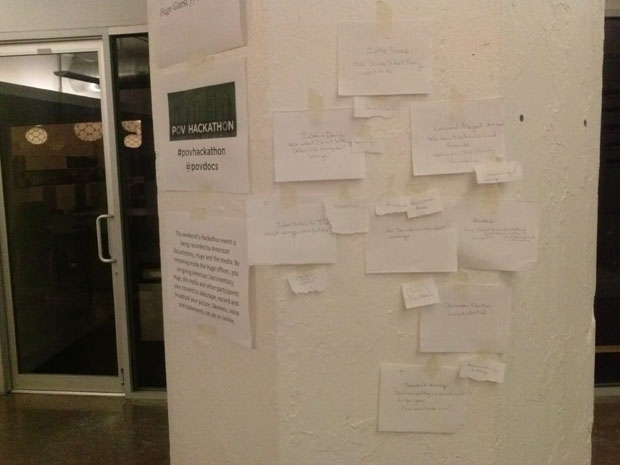 Other people at the hackathon may have wondered what was going on, because I stared at that those bits of paper for a long time. A film’s creators make all the choices for when we see what we see. A choose-your-own-adventure to some extent breaks that linear control, so that the construction is multi-dimensional, or multi-story. If a user of the interactive follows one of our subjects into the art room but then chooses not to follow her into the woodshop, what is that user missing? What if the user then goes back to the beginning and takes another route, and a third, and a tenth? What if the user checks a “Jalen” tab and only watches scenes in which Jalen appears? How about only scenes of Jalen in the woodshop? As I tried to figure all this out my brain felt like it simultaneously tightened into a knot and leapt into free-fall.

We did it. We stayed at Huge clacking and staring at bits of paper on walls late into Saturday night and were back at it Sunday morning, coding, editing and designing until presentations began at 7pm. Adnaan Wasey, POV’s head of digital media and mentors Parker Mitchell, Lam Thuy Vo and Sumin Chou swept in at key points to raise the bar and provide brilliant insights and emotional support.

I am proud of what we came up with, especially given early setbacks, and prouder still of how well Alex and I were able to work together. 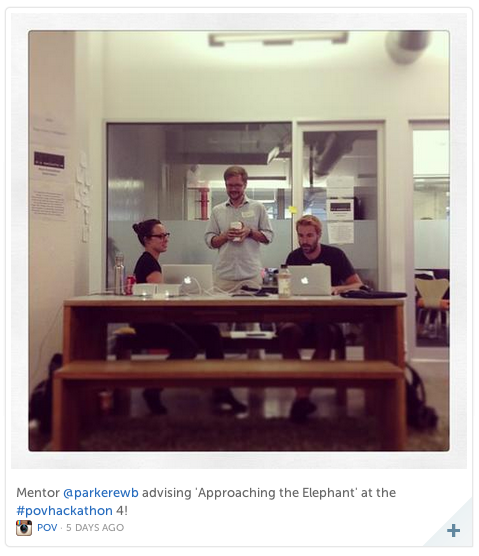 During our presentation, one of the thought-provoking criticisms of our prototype was that the thread of scenes did not seem to provide enough hooks that drew the user to want to watch further. This led to a counter-criticism from someone in the audience that maybe the point was less to create multiple narratives with motivated signs that lead the user through the story than to provide a chance to freely wander. I think the approach of this choose-your-own-adventure will fall somewhere in between. One of the classic notions of what cinema should be that in the 1930s steamrolled its way through and continues to dominate mainstream cinema is that of the narrative arc. Beginning, climax, closure. Not all films, never mind choose-your-own-adventures, lead their viewers in this manner. Three days after the POV Hackathon and still thinking about possible ways to balance freedom and structure in a choose-you-own-adventure I went to BAM to see Love Streams, John Cassavetes’s last feature. Afterwards I came home and read Roger Ebert’s reviews of Love Streams and A Woman Under the Influence. In his review of Love Streams, Ebert writes:

The movie is exasperating, because we never know where we stand or what will happen next. I think that’s one of its strengths: There’s an exhilaration in this rollercoaster ride through scenes that come out of nowhere. This is not a docudrama or a little psychological playlet with a lesson to be learned. It is a raw, spontaneous life, and when we laugh (as in the scene where Cassavetes summons a doctor to the side of the unconscious Rowlands), we wince.

And from his review of A Woman Under the Influence:

[Cassavetes] was the writer of his films, but because he based their stories on his own emotional experience, and because his actors were family or friends, his world felt spontaneous. There was never the arc of a plot, but the terror of free-fall. He knew that in life you do not often improvise, but play a character who has been carefully rehearsed for a lifetime […] You feel the tumult of life goes on uninterrupted, that each film is a curtain raised on a play already in progress.

The POV Hackathon provided an opportunity for me to begin thinking about old choices in new ways. To consider the role of context, narrative, or lack thereof for the purpose of an online interactive. Cassavetes’ films are hardly uncontrolled improvisations, but they are a reminder that opening a window into a world requires engagement but not necessarily firm narrative structure — possible inspiration not only when making films but interactives as well. The construction — and it always is one — of a choose-your-own-adventure is an adventure in itself.