by Howard Feinstein
in Festivals & Events, Filmmaking
on Apr 26, 2010

Some good, or at least interesting, films surfaced at Tribeca this year—I’ll get to a few a couple of paragraphs down, and I wrote about others here last week—almost in spite of the umbrella organization itself. You can’t help but wonder: What is the template for this festival, which has been struggling to find its identity since its inception? Toronto, Sundance, Cannes, Berlin? San Francisco, Denver? Answer: It’s not cast from a festival mold at all, in spite of the invaluable input of former artistic director Peter Scarlet and David Kwok, as far as I can tell the only current programmer with any significant knowledge of film as art. No, the model is the Hollywood studio. On top of that, Tribeca’s priorities are much more L.A. than New York, no matter how much the promo materials cry, “Here comes the neighborhood.”

A tad of space with some examples that support this reading:

* On juries, bold-faced names, rarely of intellectuals or competent filmmakers. According to one member of the documentary jury, “It’s been the best run festival I have ever been at, though putting Jessica Alba on a doc jury is a bit CRAZY;”

* Articles in festival daily mainly on bold-faced names, some unbelievably superficial (two separate pages on juror Renee Zellweger’s assorted black dresses over the years, and an article, including cover photo, on high-powered personal publicist Leslee Dart of 42 West, which, strangely enough, is handling 13 of the festival’s features;

* Neon ads for chief sponsor American Express on either side of at least one movie screen in Chelsea;

* Self-promotion of co-founder Jane Rosenthal, a producer of big-budget studio movies (Meet the Frockers; The Adventures of Rocky & Bullwinkle), whose business partner and fest co-founder is figurehead Robert De Niro (not frequently seen in indie films), the third co-founder being Craig Hatkoff, Rosenthal’s husband. Take a gander at Jane’s World in the first Tribeca Daily. She tells an interviewer, “You can’t go wrong with Bergdorf….Isaac Mizrahi, Zac Posen, Bottega Veneta, YSL. I love Ralph Rucci….And I love my Manolo Blahnik and Lanvin.”

One major film critic told me, “It seems like (Tribeca) exists primarily to fill George Whipple’s airtime.” Like the studios it emulates, Tribeca appeals to the lowest common denominator, so gets nice-sized audiences. Most of the movies are accessible, without significant merit, more commercially oriented than reassessments of cinematic art. There is an inherent contempt for the moviegoers, who are rarely required to stretch. The films and the festival itself are easily digested.

Extreme obsession is the theme of three English-language movies. The least successful, but perhaps the most obsessive of all, is the British production brilliantlove, directed by Ashley Horner from a screenplay by Sean Conway, a devotee of Erotology. Liam Browne and Nancy Trotter Landry are excellent as two twentysomethings, he an amateur photographer, she a taxidermist, who live outside of society in a converted storage garage. The actors, naked in every way, seem as relaxed as their characters, Manchester and Noon, who have sex over and over again. It seems like Michael Winterbottom’s 9 Songs (2004) had been the definitive statement on English on-screen lovemaking, and brilliantlove adds little to the genre save a plot development in which Manchester’s photos of them having sex fall into the hands of a professional pornography collector, who tosses the youth into an art world that is uncomfortable for him. Why there are so many gratuitous pissing scenes is beyond me. 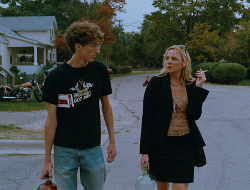 Kim Cattrall, revealing what to me is latent thesping ability as well as a face with no makeup and an imperfect body replete with flab, is the major draw in Keith Bearden’s U.S. movie, Meet Monica Velour. She courageously embodies the title character; this is a far cry from Sex and the City’s one-note Samantha. She plays a stripper/prostitute well past her prime who is trying to gain custody of her daughter. Her home is a trailer park, a milieu that Bearden says he grew up in, and it shows. My only problem with Cattrall’s performance is her speech: It so often sounds like Gena Rowlands that I got distracted. Dustin Ingram is Tobe, a 17-year-old geek obsessed with Monica’s blue movies from the ‘70s and ‘80s. He shows up in her small Indiana town and improbably courts her. This younger guy/older woman set-up has been done to death, and Ingram and his character are very close in appearance and bearing to Jon Heder’s nerd in Napoleon Dynamite. Did Bearden, who also wrote the screenplay, really need to add an older, wise black man to guide Tobe on the correct path? The film is nicely directed; the problem is that most of it is borrowed, reshaped, and thrown back together.

Best of all the obsession films is Monogamy, a superb first fiction feature by Dana Adam Shapiro, who had previously directed the documentary Murderball (2005). Inventively photographed in Brooklyn and downtown Manhattan locations by Doug Emmett, the film, co-written by Shapiro and Evan M. Wiener, almost voyeuristically follows…a voyeur. Theo (Chris Messina) is a wedding photographer with a side job as a paid photographic sleuth—but hired by the clients he shoots, who want to be able to see how they really appear. Engaged to the attractive Nat (Rashida Jones), he stops paying attention to her when he starts compulsively photographing a striking female customer, who teases him sexually when she is alone on a bench. He then sees her servicing a man who has treated her badly. His relationship dissolves, and he is in for a rude awakening after following the nasty man home. Shapiro is destined to move on to a successful career, whether it be in the indie sector or more mainstream choices.

And then there was Alex Gibney, who has two features in the festival and a segment of Freakanomics. I’ve never been a fan of his work. He is no Errol Morris. He tends to be slick, and he cuts away way too much, as if most of his viewers had attention deficit disorder, frequently to the most obvious objects or locales. He might be the anti-Michael Moore. 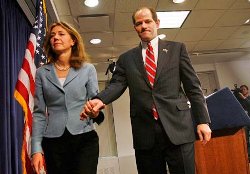 Untitled Eliot Spitzer Film is fascinating, for the subject matter alone. Eliot Spitzer participates in the film, speaking to Gibney’s camera. What, if any, were the terms of their agreement to work together? Gibney interviews Spitzer’s enemies and allies, escorts and madams, and includes a lot of tv footage of Spitzer when he was running for governor and of  press conferences during his tenure as governor and attorney general, including his confession and resignation. Yes, the film delves into the call-girl scandal, including questions to Spitzer himself, and it does not neglect Spitzer’s character flaws (a bad temper and general pushiness), but it spends a lot of time, maybe too much time, going over his accomplishments. The film holds your attention, but in some ways, it feels like an apologia. It does pat Spitzer on the back—rightfully—for anticipating the antics of Wall Street that would lead to the current recession.

Gibney is much more controlled in My Trip to Al-Qaeda, perhaps because he is necessarily restricted by Lawrence Wright’s one-man performance piece, based on his book The Looming Tower: Al-Qaeda and the Road to 9/11, and Wright’s off-stage reminiscences, tv footage, and interviews and meetings with relevant Middle Easterners he has known over the years. Wright makes it clear at the beginning that he was the first person to profit from 9/11: after the attack, people flocked to video stores to rent The Siege, which he co-wrote, and which anticipated subsequent acts of terrorism and punishment. Maryse Alberti, as usual, does a great job as cinematographer. To his credit, Gibney relaxes and allows this to be The Lawrence Wright Show. The spectator feels an intimacy with Wright. And intimacy is something I’ve never before felt in a Gibney doc.