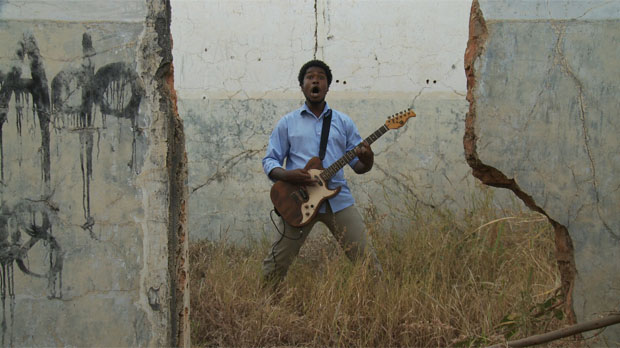 The following is a guest post from Jeremy Xido, the director of Death Metal Angola, which screens at DOC NYC on November 16.

A few years ago, I was traveling through Angola researching a film about a railway when I stopped at the only cafe in Huambo, the country’s bombed-out second city, that served a decent cup of coffee. A young man with tiny dreadlocks in a blue button-down Oxford shirt waved me over. I sat with him for a while and chatted. We talked about what I was doing there and I asked him about himself. He said he was a musician. “Oh really?” I said. “What do you play?” he looked me in the eye and said, “Death metal.” Stunned, I asked him if he would play for me. He got very excited, said he’d find an amplifier somewhere and told me to meet him later that night at “the orphanage,” and slipped me the address. I assumed it was some sort of club. But when I arrived in the middle of the night at what would turn out to be an abandoned milk factory in the middle of nowhere, it was clear that this was no club. There he was, outside the building, with an electric guitar, surrounded by 55 orphaned boys who called this place home. Using electricity siphoned from a neighbor, the young man – Wilker Flores – proceeded to play one of the hardest and harshest impromptu gigs imaginable, lit by nothing more than the headlights of a van. It was magical and terrifying, and marked the beginning of my long and profound relationship with Flores and his girlfriend, Sonia Ferreira, who runs the Okutiuka orphanage and is one of the most remarkable people I have ever met.

It wasn’t until a year and a half later that I fully understood the depth of Ferreira’s commitment to these orphaned boys she had taken under her wing and protected from the brutal and unrelenting onslaught of war. And it was later still before I realized that this fiercely intelligent, erudite, gracious and beautiful woman was a war refugee herself, who had traversed the country fleeing repeated bombings and attacks, witnessing horrors most people could only imagine and bearing it all with unflagging humor, perseverance and love.

Following that impromptu open-air death-metal concert, I went home and continued raising money for the train film I was trying to make. I eventually got enough together to go back to Angola and shoot some more. I called up Flores to let him know I was coming and before I could get another word out, he got very excited. “Awesome! You have to come. We’re organizing the first ever national rock concert and you’re going to film it! You’ll have access to everything and everyone! This is perfect.” Before I fully knew what was going on I had agreed to make a film I never intended to make. At the time, I kept telling myself it would just be a short report, a minor thing. Little did I know that by entering into this world, my mind would be would opened in ways I couldn’t anticipate, and my preconceptions – not only about Africa, but about music and trauma and human willpower – would be shattered and built back up anew.

Over the weeks we shot in Angola, I got arrested and one of our protagonists was nearly courtmartialed for 20 years. I found myself pleading the case for Angolan rock to four-star generals in the Angolan armed forces, taking care of sick crew members, living with 55 orphaned boys and being immersed in a profound counterculture of some of the smartest, best informed, funniest and committed people I’ve ever hung out with.

It was remarkable to see how Ferreira brought wild, rough-and-tumble death-metal musical intellectuals into the lives of her boys at the Okutiuka orphanage. She never pushed her agenda on them, but also never hid her passion and love for the music and the people who played it. Simply by being surrounded by all of it, the boys started to react and grow and find strength. And to tell the truth, pretty much the same thing happened to me. It became impossible to resist. They let me know, by the power of simply being who they were, that the world is more complex, varied and unexpected than anything I had ever imagined.

I have to say that I’ve never seen anything like this place and never met anyone like these people. This has truly been one of the deepest, most life-altering experiences I’ve had. The tremendous power, bravery and grace that these people embody lies at the very heart of this film, Death Metal Angola.