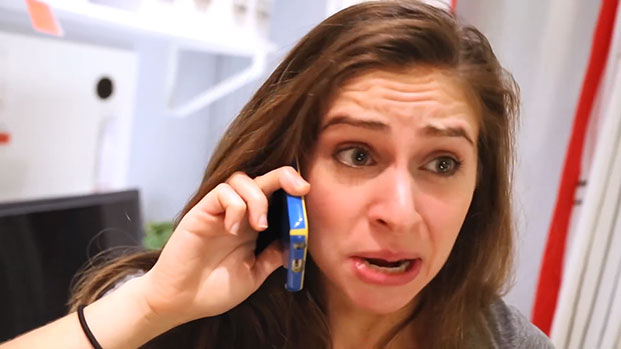 by Michael Murie
in Director Interviews
on Nov 18, 2013

Daniel Hubbard made a parody of the movie Gravity that has already received a lot of internet attention and over 640,000 views in just four days. The short features two people hopelessly lost in an IKEA store.

Hubbard works as a video editor for Broadway.com in New York while studying improv at the Upright Citizens Brigade Theatre and producing sketches with his group, “sure sure sure.”

We asked him to explain how he came up with the idea and how it was shot.

Filmmaker: How did you get the idea?

Hubbard: I love Gravity, and I thought the trailer was very unique. I’m constantly trying to come up with sketch ideas, so the idea of getting lost in IKEA seemed like it could easily parallel the Gravity trailer.

Filmmaker: How did you shot in IKEA?

Hubbard: IKEA did not know we were shooting the video. The other two people involved were Alex Viola (actor) and Tyler Newhouse (camera). Tyler and I shared shooting responsibility, and we managed to get everything done in about three hours. We wandered around the store and didn’t attract much attention since it was such a small production.

Filmmaker: What was it shot on?

Hubbard: We shot with a Canon 5D Mark III with a juicedLink RA333 and two wireless Sennheisers for audio. Portability was key.

Filmmaker: What are you working on at the moment?

Hubbard: I’m about done shooting and editing another sketch with “sure sure sure.” Right now, my main focus is sketch, but I would love to make longer, narrative stuff when I have more time.

On the Web: Daniel Hubbard