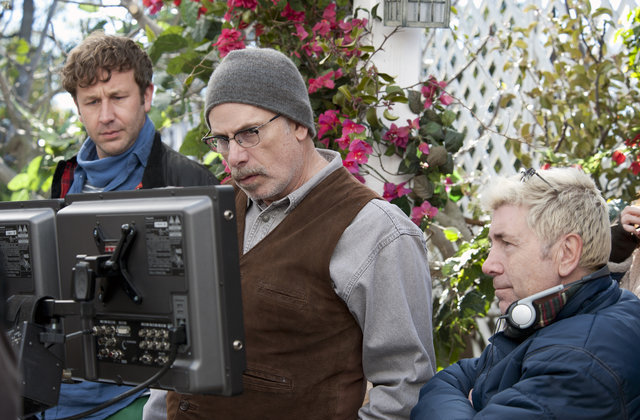 As a longtime writer for both big and small screens and a member of Christopher Guest’s regular comic ensemble, Jim Piddock was an ideal creative collaborator on Guest’s 2013 TV series, Family Tree, which recently came out on DVD through HBO. The show centers on Tom Chadwick (Chris O’Dowd), a newly unemployed and recently single Londoner who breaks out of his stagnant funk by researching his family’s genealogical roots, discovering a branch of relatives in the U.S. and ultimately traveling across the pond to meet his Stateside kin. Piddock co-wrote Family Tree with Guest and also produced and acted in the show, appearing among a great comic cast that includes Guest and regulars like Michael McKean, Ed Begley, Fred Willard and Bob Balaban and new faces such as O’Dowd, ventriloquist Nina Conti (with her puppet Monkey), Tom Bennett and even Amy Seimetz. Filmmaker spoke with Piddock about the experience of creating the show with Guest, the trick to bad comedy and how improvisation improved his writing chops.

Filmmaker: This is the first time that you’ve written with Christopher Guest, but you appeared in three of his previous films.

Piddock: Yeah. We worked on three films beforehand, but simply in a director-actor relationship. So this was the first time we’ve actually written together, yeah.

Filmmaker: There’s a certain looseness to his work. Was that inherent in the way that the show was sketched out?

Piddock: Yeah, well we spent six months actually writing eight episodes. We started by sitting around either my or Chris’ dining room table and just making each other laugh for a couple a days a week. And then after about a month we realized we had something and we started to step it up a bit. People started talking the business stuff and started getting it all sorted out. But it took us about six months [to sketch things out] which is probably longer than what it would take to write actual episodes. They were very detailed outlines. What we’d do is write very detailed character backgrounds for each; the main characters and the stories were very well mapped out and we did more so than what Chris would have done for the films because we knew we had less shooting time so we had to leave a lot less to chance. And then the actors were given that where the whole stories are all worked out, and some of the jokes written in there. [There was] no actual dialogue other than the fake TV shows. They had very detailed character backgrounds which literally said where they went to school, the name of the school, their pet’s names, everything. So the actors came in with as much [information] as they could and we let them go…it’s kind of like planning a trip on Google Maps and then letting someone else take the trip.

Filmmaker: What was it like having worked as an actor for Chris and then being on the other side of that?

Piddock: It was great. I mean, we obviously shared a slightly different relationship because we’d spent so much time working on it together. The producing thing was fun and interesting because we were involved on so many different levels. When I’m working as an actor with him I’m just showing up and doing my thing and moving on, and that’s it. [On Family Tree], we worked together pretty much non-stop for 18 months.

Filmmaker: He seems like an incredibly fun person to work with but he’s very deadpan much of the time…

Filmmaker: Is he very serious in the way he maps things out? He seems a very studious person.

Piddock: Yeah, he’s very dry. I mean, I’m fairly dry but he makes me look broad. But, when we’re alone in a room working, I can get him to laugh and he can make me laugh a lot. And he loosens up a lot. He’s very quiet socially and in terms of meetings; he’s quiet when there’s groups of people. He’s very relaxed on the set; he’s not Mr. Chatty but it’s a very relaxed atmosphere and he creates an environment that’s very productive for actors.

Filmmaker: He has a ensemble which you’re part of but there are a lot of new people who are on this show. How much did casting affect the characters and narratives of the show?

Piddock: Well, some people [were there] right from the beginning. I mean Nina [Conti] and Monk were the first two characters. Those, we knew right off the bat, because we knew the idea of having a monkey puppet as a member of the family that no one really referred to in any different way than they would a human being, that amused us. We knew that I would do something, and then Chris O’Dowd came into the picture quite early because we were looking for somebody and I’d seen Bridesmaids and really liked him, and then Chris [Guest]’s daughter sort of recommended him. So he was on the short list very early on. And then the two Chrises met in London when we first came over here to meet with the BBC and other people. [Chris Guest] said right away, “This is the guy.” Normally Chris will just meet with people and then cast them. We did a lot [of casting] off tapes, especially for the smaller guest roles.

Filmmaker: How much trust do you have to have with the actors? It seems that for Guest’s methods, for the way that he operates as a writer and director, you’d need to have a lot of faith that the actors are really going to fit well into the bigger picture.

Piddock: Yeah definitely. We really have to have confidence. Yes, it’s a leap of faith. I think Chris is instinctually great about it. He can meet certain people and talk to them a while and he’ll know within a couple of minutes. He does that, but a lot of them we did by tape. It was a question of watching tape and seeing if someone had the right sensibility. And there would be some sort of improvisational question that they would be asked by the casting director, and you can tell right away whether that person is going to be able to do that type of work that we do.

Filmmaker: What was it like, with the fake sitcoms you made up for the show, to write intentionally bad comedy? Is it easier to write bad comedy than to write good comedy?

Piddock: Well, I have to say, it really was the easiest thing certainly I’ve ever written. It was scary because I suddenly went, “Oh my God, I could easily be one of these old hacks churning this shit out.” So yes, that was staggeringly easy. And then the dramas were more just, they were just flat-out bad in concept. Obviously the concept was to do a Tudors rip-off with the The Plantagenets, the main joke being that it’s a historical drama with nothing but sex and violence. There’s kind of a second of history, and then sex and violence. And then with the other one, the idea was that the network had run out of ideas of how to do Sherlock Holmes and so they did it in space.

Filmmaker: Looking back at your credits,you’ve written a lot of drama, a lot of genre pieces as well as comedy. There doesn’t seem to be a lot of overlap between the two areas of writing; one tends to be pigeonholed as one or the other.

Piddock: I feel as though I’ve done the same as an actor. I’ve always liked to do different things. Once we finished editing Family Tree, I had about five weeks I knew free and I optioned a book. A very, very violent period piece in 1890s Alabama and I launched into that. It couldn’t have been more different and I found it really [refreshing]. It’s like an appetite: you’ve eaten a lot of chicken and you might want to have some fish. It’s nice for me to be able to bounce back and forth, and to be honest with you not many people have that luxury. I feel fortunate that I’m able to do that.

Filmmaker: Do you feel that the creative, spontaneous way you worked with Chris as an actor helped you as a writer? It feels like there’s a lot of interplay between those two disciplines.

Piddock: I think [writing] definitely helps the improvisation. Whether the improvisation helps the writing, I don’t know, but a lot of the people that work with Chris are also writers. I think that helps, for sure. You are coming up with stuff on the spot or the night before or that morning; when you’re doing scenes you’re definitely using that part of your brain as an actor.

Filmmaker: I think there are certain actors who when they forget a line are completely lost but there’s other actors who, because they know the general direction of where they’re going and their understanding of the character, are completely fine. And Chris seems to work exclusively with the latter.

Piddock: As I said, they’re either writer/actors or in some cases they’re just actors that are really good and immerse themselves so much in a character that it just comes out of them. They tap into creative parts of their brain that they may not utilize in the rest of their lives. There are certain actors who are just very good at assimilating themselves into a character so that they can think in that character and talk in that character and improvise naturally. That’s great to see, it’s really exciting.

Filmmaker: What was it like as a producer on the show? What were the challenges of making this for both BBC and HBO, and doing this on two different continents and two different systems?

Piddock: Well, NBC Universal International physically made the show. And HBO and BBC financed and broadcast it. It was great because Chris loves to be left alone to do what he wants to do and we were very much left alone; it was very supportive. We couldn’t have had more support in terms of what we were doing and minimum interference. So that really helped. From a producing point of view, it really made life a lot easier because you’re dealing with a million different things anyway and it makes life a lot easier when you don’t have people breathing down your neck.