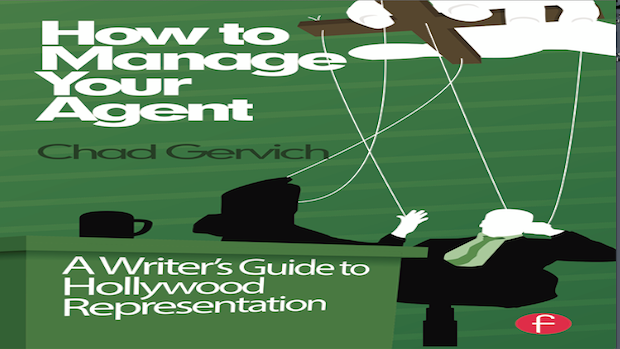 by Filmmaker Staff
in Filmmaking, Screenwriting
on Nov 26, 2013

The following piece on TV writers’ interactions with their agents is excerpted from Chad Gervich’s just-released How to Manage Your Agent: A Writer’s Guide to Hollywood Representation. It can be purchased on Amazon at the link above.

How much should I talk to my agent during staffing season? I know they’re superbusy, and super-stressed, so I don’t want to bug them, but I also want to know what’s going on. Should I call once a day? Once an hour? Once a week? What?!

“It’s not about how frequently you call,” says Verve agent Amy Retzinger, “although please do not call every single day, and do not call once in the morning and then again in the afternoon . . . and don’t never call, because there are certainly clients you don’t hear from for weeks and that’s dangerous, too. In a perfect world, you might be talking to your agent a couple times a week, [but] it’s more about the content of the conversation. Do not call your agent and just say, ‘What’s up? What’s going on?’ It puts your agent on the defensive. I like if a client can say, ‘Hey, what’s going on with [Blue Bloods]? A friend told me [a showrunner] is looking to meet people.’ Most agents welcome information, and even the best agent isn’t going to have every piece. So be specific, bring something to the tabl—even if you’re ultimately hoping to have a wider staffing season conversation.”

How many showrunner meetings should I expect during staffing season?

According to most agents and managers, three to five seems to be a happy number, a number at which “they better be locking down one of those jobs,” says one manager. Having said that, “a lot of high-level writers at a big agency will get fifteen showrunner meetings just because [their agents] make them happen,” says one agent. “But some of those meetings aren’t even real meetings, they’re just favors.” Also, many showrunner meetings end up being for shows that never make it to air. “I’ve had a writer take six showrunner meetings and not a single one of those shows gets picked up,” says Jen Good of The Alpern Group. This is the important thing to remember: while it’s nice to have a lot of meetings, “it only takes one to get a job,” says Jeff Holland of The Cartel. However, “if you’re getting zero meetings throughout a complete staffing season, and if you’re getting zero within two full staffing seasons, there’s a problem. You probably need to start looking for new representation, or you need some new material.”

I just had a showrunner meeting with the EP of a fairly successful drama. Should I send a thank-you note?

“That sounds like something one should do, but showrunners [don’t] have a lot of demand for them. While it’s nice if you have some amazing connection with the showrunner, or you’ve discovered you both like a certain type of cornmeal ground from a waterwheel in some far-flung place, send them a bag of cornmeal, sure—but most of the time, if you follow up too much, you seem needy.”— Lesley Wake Webster (The New Girl, American Dad)

I’m a half-hour writer working on a single camera comedy and, to be honest, it’s not going well. I don’t seem to click with the other writers, the showrunner, or the sensibility of the show. But I’m scared to tell my agent—what if he loses faith in me? I know it’s my job to adapt to the show—if I’m not able to do that here, won’t he see my as a failure?

Not necessarily. “If he gets a call from [the showrunner] out of the blue, a week before your contract’s up, and he thinks you’re going to get renewed, your agent can’t prepare for the next job. That’s the most important part—for him to get one step ahead. He can even call the network and say, ‘You know, it doesn’t seem to be working out over there.’ It happens all the time, people come and go, but your agent can do damage control. Then your agent can go out to the marketplace and say, ‘It just wasn’t the right show for him, he’s not a single-cam writer.’”—Veteran Big Four agent.

I’m a writers assistant on [a popular drama] and was just offered my first freelance script. Should I pay my agents commission on this?

This is always a touchy subject among young writers and agents. After all, freelance scripts don’t pay much, and most go to young aspirants who could use the money. On the other hand, writers with representation have certain contractual obligations— and one of those obligations is to pay their agents for any writing income, no matter how big or small. Besides, most young writers have young agents, and young agents also have careers to grow—which they do by commissioning clients and building up bookings.

“The question I ask,” says Verve agent Zach Carlisle, is “did I help him get the freelance? If I was lobbying shows and showrunners once a week, pushing, pushing, pushing to get the writers assistant a freelance, and it was based on my relationship with the showrunner, in concert with their writers assistant position, there’s definitely an argument to commission.This situation just came up. I had a [writers assistant] who I certainly helped—but he worked very hard to get that [freelance] job himself, and I didn’t feel right commissioning it. He asked me to, but I didn’t feel it was right. It’s not a ton of money, I believe in him long term, and I didn’t feel I had done enough to deserve the commission. For the most part, with these guys, if you believe in them, you hope they get staffed and continue to advance their career.”

What if a client pitches you an idea and you hate it? What do you say?

“Usually the way I frame that conversation is: ‘I have to be honest, this one doesn’t light me on fire.’” says UTA agent Joel Begleiter. “[Maybe] the concept seems generic. Or I found the whole thing confusing. Or you just don’t have the pitch together. I rarely have an instance where the client says, ‘Well, fuck you, go sell it.’ [A good client is] open to the conversation about why I’m worried. They may ultimately, nicely say, ‘I understand your concerns, [but] I’d still like to take a cut at this.’[In these cases], I call producers and say, ‘I’ve got this client. I know you like this client.As a reminder, here’s who they are, here’s what they’ve done. They’ve got an idea for a television show that I think is interesting. It’s not fully baked yet. They’re going to need some help, so we’re coming to you because you’re the right person for it.’ We put the writer in rooms with producers and let that be the canary in the coal mine. If those producers are like, ‘Oh my God, I fucking love it,’ I’m wrong, and we move forward. If those producers pass, I [go to] to the client and say,‘Listen, [this idea’s] not going to work.’ [We don’t take the pitch] out to networks or studios where [the writer’s] value could be damaged.”

If I pitch my agent an idea and he hates it, can I find another agency to represent only that project, but stay with my current agent for everything else?

“Absolutely not.” says Begleiter. “You can fire me and be represented [elsewhere], but you are not welcome to have the project represented by another agent somewhere that likes it better.”

Should I leave behind a treatment or one-page after a pitch?

“I generally encourage [clients] not to leave a paper treatment,” says N.S. Bienstock agent Ra Kumar. Contrary to popular belief, this isn’t because producers may steal your idea. In fact, if you’ve developed your idea properly, it should be so personal and distinctive that it can’t done without you. Rather, there are two reasons not to leave behind a treatment.

Reason One: “A lot of times you’ll get input from [executives] about the pitch: ‘we’re looking for this, not that,’” says Kumar. Maybe they think the show should be set in a beach town instead of a ski resort, or should have a female lead instead of a male lead. USA’s Suits, for instance, was originally set in an investment firm, until USA suggested creator Aaron Korsh transfer it to a law office. By not giving execs a “leave behind,” you can integrate their notes into your concept and send them a perfectly tailored treatment a day or two later. This not only allows you to give execs precisely what they want, it allows you to snag their email addresses and open a channel of communication. Even if they don’t buy this idea, you can keep in touch, take them to drinks, and nurture a relationship that will lead to them buying your next idea.

Reason Two: When you leave the meeting, execs have to go pitch your idea to their boss, and you want them to be the most passionate, enthusiastic pitchers possible. They have to transfer your fire and excitement to the head of the company! Leaving a treatment gives them a crutch; they’ll be constantly glancing at the treatment, making sure they have details and words right. Or worse yet, they’ll just say, “Here, read this.” But details, words, and pages are much less effective than passion and excitement—so don’t give them anything that could sap that energy!

I know TV staffing season usually begins in April, so this February and March I started contacting agents, looking for representation. I heard back from only one person, and she told me she wasn’t looking for new clients at that time. How could she not be looking?! Staffing season was only two months away; shouldn’t she be starving for new clients?!

“By March, I’m already committed and invested in my current roster, making calls to shows, [so] it’s hard to focus on somebody newer. [A good time to find representation is] summer/fall, after agents realize who worked and who didn’t. They [realize] they’ve made a couple choices signing [writers] who didn’t work out; their material isn’t connecting or their samples are soft, so you part ways. Sometimes it’s [also] good right before the holidays. Around Christmas it quiets down a lot; agents have time to catch up on their reading, and the barrage of pilots hasn’t come in yet.” —Jen Good, The Alpern Group.

Publisher’s bio: Chad Gervich previously wrote the bestselling, TV-handwriting book, Small Screen, Big Picture: A Writer’s Guide to the TV Business. How to Manage Your Agent: A Writer’s Guide to Hollywood Representation is a fun and friendly guide to the world of literary representation. The book guides the reader into the inner sanctums of Hollywood’s top agents, managers, writers, producers and executives to provide advice on how to maximize the benefits of having representation, if you even need it at all! The book appeals to anyone curious about what goes on in their agent’s head as well as the why, how, and when guide to hiring representation.