‘LIFE 2.0? AT STRANGER THAN FICTION

by Mary Anderson Casavant
in Festivals & Events, Filmmaking
on May 12, 2010 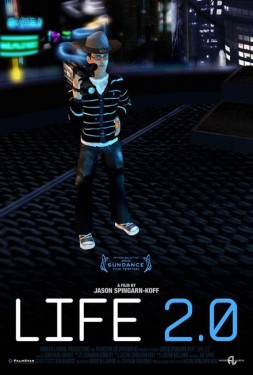 For enthusiasts of Second Life, a 3-D virtual world that enables users to interact with each other through avatars, all the hype surrounding Avatar must have seemed kind of overblown. After all, they’d been living their own science fiction fantasies for years, and their virtual world reflects the fantasies of millions of people, not just Mr. Cameron’s.

Last night, Stranger Than Fiction featured a screening of Life 2.0, a dreamy documentary that explores what happens when people start living a Second Life. Director Jason Spingarn-Koff explores the phenomena from the inside – his filmmaker avatar straps on a digital camera and turns its lens on avatars at home in their second world. Among his characters are a couple falling madly in love, a stylish avatar entrepreneur and a bouncy pre-teen girl who loves to dance.

Woven into the Second Life computer footage is verité footage that shows us the stories behind the avatars. That couple falling in love? Two people whose torrid affair will rip their lives apart. The entrepreneur? A woman whose online success has freed her from her offline job. That little girl? Well, she’s a he, a man struggling to bridge the gap between his first life relationship with his fiancé and his Second Life obsession.

Spingarn-Koff doesn’t shy away from the ickier aspects of Second Life (there’s some full-on avatar sex) or from the addictive nature of internet gaming, but he’s an intelligent enough filmmaker to know that destruction and catharsis can be two sides of the same coin. His subject’s relationship to their online world is a lot like their relationship to the real world – it’s complicated.

Filmmaker: How did you initially get interested in Second Life?

Spingarn-Koff: I was reading about Second Life, and like many people, I thought this is something I need to check out. It was so strange and so interesting and so funny. I had so much fun with it the first time. I was laughing out loud with the things you can do… It seemed like an important historical moment where a science fiction idea was being implemented and I wanted to see what happened people when they were in this world.

Filmmaker: How did you find your subjects?

Spingarn-Koff: I spent hundreds of hours exploring and meeting people…A lot of the coverage at the time was very positive and promoting Second Life as this media utopia, and I was surprised by the people I met who were talking about addiction and relationships that were crossing from Second Life to real life. What’s really interesting to me is what’s going on the other side of the screen as a result.

Filmmaker: Did you start casting knowing what you wanted in a character?

Spingarn-Koff: I didn’t want to over explain, so what I needed to do was settle on characters who would portray broad experiences of people in Second Life. So I would draw up these lists of the broad categories, and it was like a puzzle, if I have an entrepreneur, that would cover the economic side and the fantastical side of Second Life. I decided I needed an entrepreneur, a relationship story and some type of identity story, and I was looking for those type of people. I had a pretty firm concept of what I was going to do.

Filmmaker: Despite all the hype, Second Life seems to have a limited appeal.  Why didn’t it capture the mainstream imagination?

Spingarn-Koff: There are a lot of people with avatars. Facebook is an avatar – it’s not your true identity. It’s the identity you create yourself. These concepts are very pervasive, and it’s about who we are and how identity is being formed…One of the main characters has an avatar who is completely different from himself – a guy with an avatar in the 11 year-old, but it’s not sexual. It’s an expression of his subconscious. The relationship of his identity to his avatar is very complicated.

Filmmaker: When characters start to bring their Second Life relationships into real life, things get complicated. Did you expect that to happen?

Spingarn-Koff: A key question in the film is what’s real, can something be real if it’s made up purely of pixels? That’s question that plays itself out throughout the film, the people behind the pixels are real people, and the relationships people form in second life are real relationships…People fall in love in second life, and it feels as real as any love they’ve ever had, but then they meet in real life, and the question is who are they, are they their bodies or their avatars? Relationships can get pretty mixed up when they span the virtual and real world.

Filmmaker: Do you still participate in Second Life?

Spingarn-Koff: I spent more than three years making the film, and at this stage, I don’t go in purely for fun, but I’ve been doing some things lately. We created a virtual festival tent where people can go and learn about the film, and we built a virtual movie theater where we’ve done some events that we called mixed reality events…As I’m doing more social outreach, I’m realizing there’s a lot more we could do in Second Life. — Mary Anderson Casavant