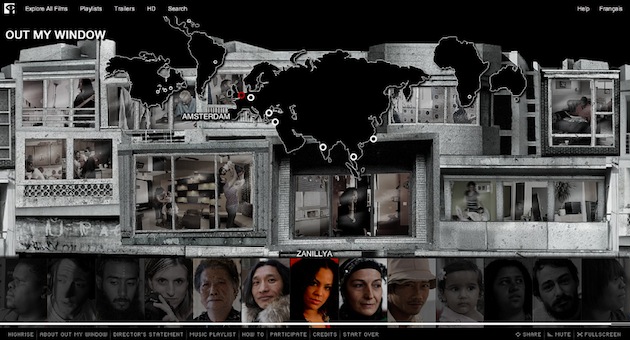 Highrise: Out My Window

by Sarah Salovaara
in Filmmaking, Transmedia
on Nov 25, 2013

As a consumer of new media – to say nothing of its makers – how does one go about keeping abreast of the emerging form’s constant developments? MIT Open Documentary Lab hopes to keep interested parties up to speed with _docubase, a new project that was launched yesterday at IDFA. A curated platform, _docubase will maintain an open dialogue on the “new documentary,” the fledging form that draws from interactive and community-created fact-based storytelling.

“No longer must we look back at those unconstrained moments of creativity from a nostalgia-tinged distance,” reads the _docubase manifesto, referring to the unchecked and experimental early years of film and television. “Instead, we can learn from the past and record today’s nascent steps, collect and consider their many innovative directions, and in the process, expand and enhance meaningful participation in the new documentary community.”

With a rotating roster of filmmakers, festival organizers, critics, and technologists acting as curators, the collection will cull a wide-range of documentaries – some modelled on films, some on games and some on something else entirely.

First up, Caspar Sonnen, the new media coordinator at IDFA and curator of the festival’s DocLab, has put together a playlist of his favorite interactive films, which range from Highrise: Out of My Window, an examination of apartment living around the world, to Alma: A Tale of Violence, which requires the viewer to move between a former gang member’s confession and supplemental imagery.

_docubase will rely on audience participation, not just in the viewing experience, but in determining film categorization. With an expansive set of tags to be treated as metadata, users will organize their selections through language, which _docubase hopes will shed light on the means of enhancing communication across the form’s disciplinary divides.

Not one to jilt its historical roots, the _docubase homepage currently features Tape Recording Clubs, a British-based trend that followed the arrival of inexpensive reel-to-reel tape recorders in the late-1950s.  Be sure to read up on it, and several other projects over at the site.