“It’s Not Enough To Have a Good Story with a Video Camera in the Vicinity”: Lucy Walker on The Crash Reel 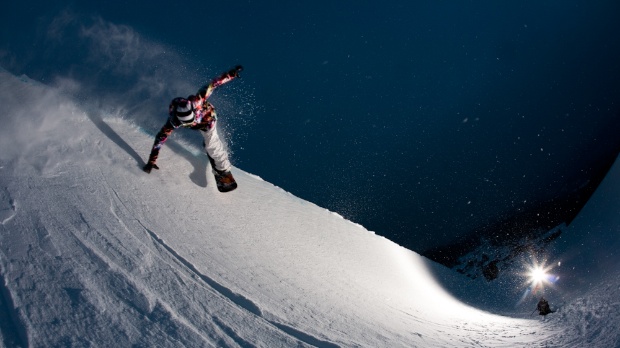 by Scott Macaulay
in Directors, Interviews
on Dec 14, 2013

Depicting professional snowboarder Kevin Pearce’s rise to the top of his sport and then his struggle to recover from a monster wipe-out and traumatic brain injury, Lucy Walker’s The Crash Reel is riveting, emotional, sobering and enraging. It tells a very human story as the endearing Pearce struggles to not only physically recover from his injuries but, at such a young age, to invent a new identity for himself and his future. At the same time, the film is a provocative, well-researched takedown of the extreme sports industry, which markets vicarious danger for energy-drink consumers and sneaker-wearers at the expense of its star athletes’ long-term health. And then there are two other affecting storylines. In one, for the first time, Pearce’s rivalry with star boarder Shaun White is chronicled both on and off the half-pipe. And, in the other, Pearce’s family drama, in which he resists their entreaties to stop boarding as well as reconciles the effects of his actions on his younger disabled brother, is captured with heart and sensitivity.

The Crash Reel is currently in theaters nationwide.

Filmmaker: So, we’re talking about The Crash Reel just after you learned you were Academy shortlisted for Best Documentary. Congratulations.

Filmmaker: Why do you think it’s so hard to make a good documentary?

Walker: Because real life is boring and messy, and rarely are you there. I think cinematic stories are few and far between in documentaries. I think it’s really hard to find an amazing cinematic story and then be able to access it and marshall your resources [at the right moment]. Great documentaries are rare things — otherwise we’d be watching them all day long. I’m a filmmaking snob. It’s not enough to have kind of a good story with a video camera in the vicinity. I want to make truly excellent, quality films that you watch for 90 minutes on a big screen with a big sound system and that are worth that much time out of your life. I think those films are really rare. I would start waitressing before I’d release inferior product on people and ask them to go see it. I think the world is a big and interesting place, and I don’t want to waste people’s time. I want to tell the most important stories I can manage.

Filmmaker: Obviously the snowboarding footage is incredible. You were blessed here with a very cinematic subject. But what was it about the material in addition to that that make you think it would make a great movie?

Walker: There are so many things. I think Kevin’s a superstar. I think his family are brilliant. I think that the question of what he was going to do next is amazing. I think the question of head injury in sports is obviously super topical. Kids are dying doing extreme sports, and the ratings are higher than ever and nobody’s looked at that. There are all these glamorous crash reels — gnarly crashes strung together that are enormously popular on YouTube. Nobody’s asking real questions about what the hell’s going on. Young people are dying and everyone else is watching and re-watching on YouTube. Brain injuries, I knew nothing about — I didn’t know you could go from not knowing your name to being back on a snowboard. And that rivalry between Kevin and Shaun White — nobody’s told that story before, this thread of two guys driving one another. It’s an epic sports rivalry with an injury twist. It’s like Rush, but more interesting and more fresh because it’s set in this world that nobody’s made a film about. And finally I saw the opportunity to talk about how life changes on a dime. That footage of Kevin’s actual accident, you can see him go from being to the top of his game to fighting for his life in three frames.

Filmmaker: One thing I was really impressed by was the economy with which you told so many different stories.

Walker: I worked super hard with an amazing editor, Pedro Kos, to really refine the story. We worked hard and screened it back every week. I was trying to figure out what stories are working, what are the strengths, and to play to those strengths. That rivalry between Kevin and Shaun, I kind of found that when we were editing and pieced it together. It was a really amazing experience, and while we were editing, I didn’t know what the hell was going to happen to [Kevin]. It was kind of hair raising. I thought, “My God, I might be making a film about a kid dying.”

Filmmaker: When did you get involved in the project, at what stage?

Walker: Right after the accident. Almost four years ago now. I didn’t meet [Kevin and his family] until after the accident. So, I licensed [all the footage] up to that point. We tracked down footage from 232 different places, 19 terabytes of material. It was just a huge job.

Filmmaker: Where there thematic strands that surfaced that rose more to the top in the post production that you weren’t expecting or vice versa?

Walker: I always knew the story would be about how you cope with change in life. And I knew that Kevin and his brother would be an interesting story. I thought, “My God, what is it like to have two intellectual disabilities in one family?” Kevin’s brother has Down’s Syndrome, an intellectual disability from birth, and Kevin has a brain injury, an acquired intellectual disability. I thought, “What is it like for the family?” I thought that would be a big part of it, but I hadn’t realized, until I met [Kevin’s brother] David, that that would be such an interesting [aspect]. That last scene between the two brothers, that’s the best scene we’ve ever shot frankly, bar none. It was just this dramatic, important, fascinating, cinematic, electrifying scene to shoot and to edit and to screen and to watch. That last scene, at Thanksgiving, we’d just finished the film. We’d gotten into Sundance. My producer had just had a premature baby, so he was at the hospital. I was like, “Oh my gosh, is it worth going back for one more shoot?” And I was really proud that we did because I think that if you gave the movie minus the last scene to the best screenwriter in the world, Peter Morgan, who wrote Rush and whatnot, and said, “Okay, write me an ending scene that ties all the pieces together, that gives an arc to the brother with Down’s Syndrome that we didn’t even know we had, and does so with maximum emotional impact” — nobody could top [what we shot]. I mean, it was jaw dropping how turning that question around, saying to David, “How are you doing accepting with Down’s Syndrome” just knocks everything to the next level. I think life is just an incredible screenwriter, an incredible filmmaker.

Filmmaker: Did your relationship with Kevin or his attitude towards you in the film change as he was changing in his recovery?

Walker: We had to sometimes account for the fact that he’s got a brain injury and he gets tired. You can’t film all day with him because he will just fall asleep mid-sentence at some point. But it was interesting, actually, that the film, I think, has really given him a sense of purpose. Sometimes documentaries get a bad rap… When you’re [documenting] the worst stuff in life, feeling that what you’re doing is going to be helpful to other people who are facing this awful pain is very nice, actually. I kind of feel happy to serve, in a funny way. It’s kind of a privilege to be there, to share someone’s most challenging moments in life. It’s an awesome responsibility that I don’t take lightly at all.

Filmmaker: You’ve introduced to a general audience, people like me, how dangerous this sport is. But do you think the people doing it are truly aware of the danger? Have they become more aware after your film?

Walker: That’s an interesting question. People feel invincible, right? And there may be an evolutionary reason for that: teenagers’ frontal lobes have not yet developed fully. It’s quite helpful for the class of young men to not worry so much about their demise so they can serve in certain situations without fear of injury. These young men have this kind of courage and invincibility that neurologists tell us is because their frontal lobe isn’t yet assessing risk and long-term planning. Even if friends around them are crashing, they feel they will not. But yet, there is an awareness, a creeping awareness. There are guys in the movie saying, “My God, I’m 24 years old and I’ve broken 23 bones.”

There is a real conversation this film has ignited in the community about how much risk is too much risk. But in the meantime, you know, the rewards are that [the athletes] are living the dream. The rewards are much more palpable than the risk. They’ll all say, “Oh, it’s dangerous to get in a car,” but actually, if you look statistically at it, that’s not true. Kevin’s story is a really interesting one because in his brain-injured state, is it just his snowboarder’s passion or his brain-injured delusions that makes him think he can get back out there, that that’s his best plan? For me, [the film] raises all these really good questions about risk, life and how we choose to spend it. This is an era where the extreme has been pushed more and more, and sponsorship is involved. It’s big business. I look at young people and think they are being marketed to through [the extreme athletes]. It’s a little bit like the Marlboro Man in our day, marketing this rebellious, cool ass living. They are the pinups of freedom, athleticism, health, beauty, mountain sports, courage, risk, daring and thrills. And many of them have contracts that say if they are injured, they just vanish, you know? We actually had some people working on our film because they had been sickened by these athletes spat out by the industry.

We didn’t really get into the advocacy piece of it all. Where there is an advocacy piece to be made is that there are so many athletes who broke their backs competing in the X Games. Even though they said the wind was blowing too hard they were forced to compete and they broke their backs. And they weren’t insured. It’s a really common story. Kevin’s was a very unique journey because thank God for his family — he had the optimum outcome given his accident. He’s an inspiration. But, unfortunately, there are many kids out there crashing, and most of them do not have such happy circumstances.