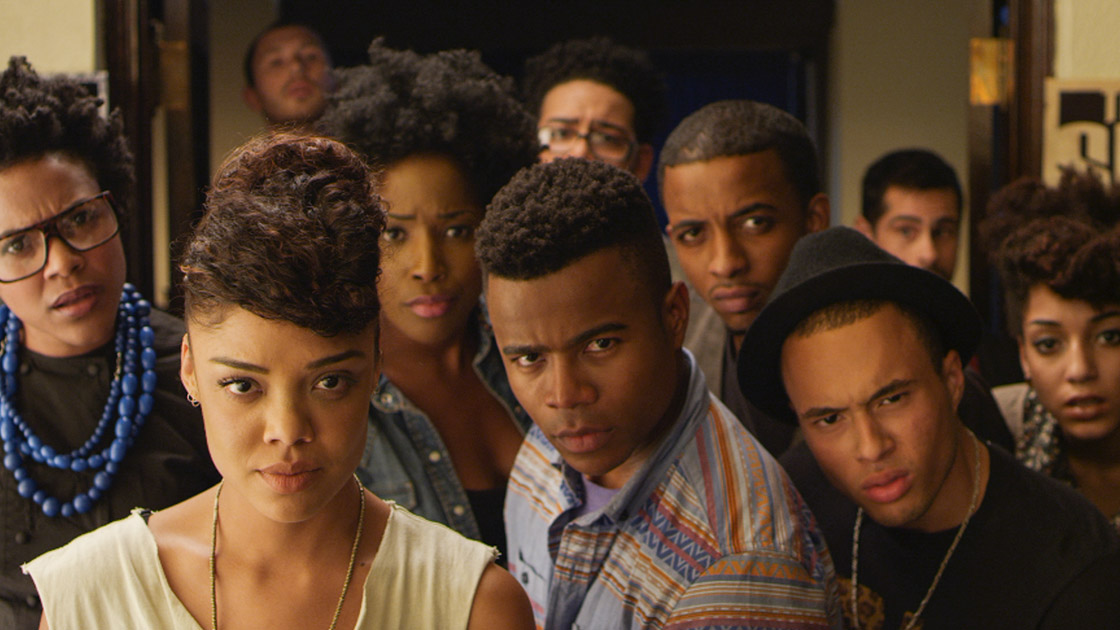 In 2011 I desperately needed attention – from the industry, a producer, a financier, anyone who could help me get my film made. At the time, trying to get attention for a “black film,” seemed impossible without a “Tyler Perry’s” preceding the title. I’d gotten the script to a place I thought acceptable (a six-year process), and even though I found the material to be urgent and moving, there was no reason to believe that anyone would give me, a publicist who hadn’t made a movie before, a shot at directing a satirical and artful rumination on what it meant to be black in America. There was no recent model for a satire featuring black leads and it had been decades (plural) since the films that inspired me to take on the genre (namely Do the Right Thing and Hollywood Shuffle) made their debuts.

Discontent with the prospect of spending another year without any movement on my film, I took steps that were right in front of me. Sam White, one of the lead characters in Dear White People gives the film its name by way of a radio show that seeks to call out accidental racism and satirize the commodification of black culture by the mainstream. Basically she gets on student radio and quips things like, “Dear White People on Instagram, you have an iPhone and go on hikes, I get it.” Would it piss people off? Would they find it funny? I decided to start a Twitter account to find out and in the process get some attention for the project.

People seemed to dig it. Mayer Hawthorne retweeted me! I mean a few thousand twitter followers and a couple celebrity retweets does not a feature film make, but it was a start. After a particularly fateful table read of the script that sparked discussion, debate, and that warm feeling you get when you’re on to something, I looked for another step. Sending out the script blindly wasn’t going to be enough. I knew that for anyone to take a look at a multi-protagonist script let alone think of giving me a shot to direct it, I’d have to find a way to grab their attention.

By that time I had a small team of producers formed out of friends and writing partners who’d been enthusiastic about the work. None of us had any money, but I figured amongst the four of us we could find a path. I decided to pour every dime from my upcoming tax return into a promo trailer — something that would at least represent the vision I had for the material. Something to make someone with money read the script and give me a shot. Maybe it’d help us get a pitch meeting? So in February of 2012 armed with a couple grand, Lena Waithe, Ann Le, Angel Lopez and I produced a three-minute piece that advertised a movie that hadn’t yet been made. We’d replace the obligatory “coming soon!” with a “coming soon?” and hopefully gain some traction.

Sensing an opportunity to capitalize on the attention I’d found on Twitter I decided to put the film up on YouTube and ask Shadow & Act (Indiewire‘s black film blog) to do a post for it. Maybe we could get to a few thousand views to help our case? I knew from my publicity and marketing background that giving people a call to action was an important part of audience-building, so at the last minute I decided to tack on an Indiegogo campaign for seed funds. Even if we didn’t raise the full $25K, maybe we’d get to $5k? Enough to pay a lawyer to incorporate us so we could start raising the film’s budget money.

The trailer blew past a hundred thousand views in its first two days (eventually reaching one million). We’d raised well over the $25K we were asking for in three days. A couple weeks into the trailer’s release I was getting emails from CNN about possibly appearing to talk about the would-be film. Attention. At last. It wasn’t long before Stephanie Allain (Hustle & Flow, Black Snake Moan) jumped on board to executive produce eventually bringing on Effie T. Brown (Real Women Have Curves, Rocket Science) to lead the producing team. By 2013, a year and a half later, the film found its perfect financing partner in Julie Lebedev’s Code Red Films and we shot in Minneapolis at the end of the summer with an eye on Sundance, one of the premiere places to get attention for an indie. And then we got in!

Movies take so much time, money, and resources to make, attention for the work is perhaps the most essential ingredient. There were many times along my journey of making this film where I felt I didn’t have enough attention to move forward. After every pass I had to somehow find a way to tap back into what elements of the story had gotten my attention eight years ago when I felt compelled to start the project and find away to translate that enthusiasm to the outside world.