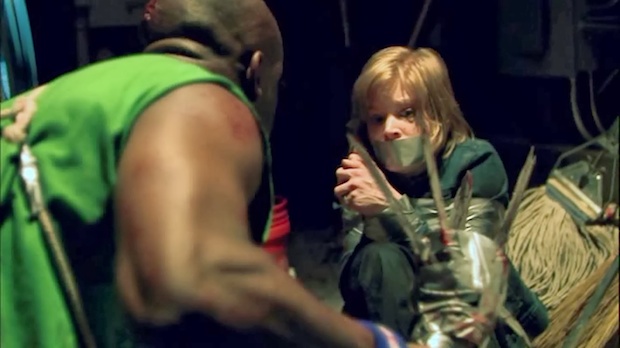 “Do you have the crazy?”

Expectations, when great, are seldom met and tend to leave an impression of disappointment. I often find the opposite to also be true; the fewer expectations, the more gratifying when something turns out to be a jewel amidst detritus. With this in mind, it fills me with quiet dread that by cresting hopes right at the beginning, I could be setting The Signal up for a fall. However, to properly crow about one of the most interesting, smart, and creepy films that the horror genre has had to offer since the calendar struck 2000, superlatives are required.

Jacob Gentry, one of the movie’s directors (yes, one of the directors), admits he and his cohorts wanted to do more than just pay lip service to genre conventions; instead they wanted to deliver “…a fresh and original hyphenate that totally subverts expectations.” He and fellow directors Dan Bush and David Bruckner had met in Atlanta (where the movie was shot) and had become friends though prior collaborations. According to Gentry (in an interview with indiewire.com), some of the more esoteric and challenging ideas forming the backbone of The Signal resulted from the trio’s previous short film, Exquisite Corpse, where one of them would begin the story and the others would pick it up and take it in another direction.

It’s in this hotbed of experimentation that The Signal was born, not only in their desire to make its content unconventional but also in terms of how the movie was made. To call it “risky” is an understatement. Shot over the course of thirteen days on a microbudget of $50,000, the apocalyptic setup is worthy of a Hollywood blockbuster: Due to a mysterious broadcast that causes madness and murderous behavior, a trinity of connected characters’ lives (and minds) begin to unravel amidst a total societal breakdown. Further complicating matters, the creators’ intentions from the outset were to have each director be in charge of how their plot segment would develop—deliberately using their idiosyncratic directorial styles—and to tell the story from the viewpoint of a different character. Bruckner’s musings on this collaborative process suggest that at times reaching a compromise could verge on the surreal: “We began to make little deals: ‘Okay, Dave, you can kill Jerry with the baseball bat, but Rod’s gonna need to find something else to duct tape knives to because Lewis has the baseball bat at that point in my movie!’”

It should have proven a celluloid car crash, but through a combination of talent, creativity, and cinematic alchemy, it’s a joy, with much of its strength coming from this unconventional structure and sensibility. The narrative is divided into three distinct “Transmissions,” with Bruckner’s strong opening, “Crazy in Love,” an example of unadulterated horror; taut and stylish while creating the requisite suspense needed to drive the action. It barrels through plot exposition, although in a manner familiar to any consummate genre fan. It’s a feint, and in hindsight a masterstroke by the filmmakers, using expectations against the viewer just before pulling the rug out from under us.

Gentry’s segment, “The Jealousy Monster,” is where the slap-in-the-face realization comes of just how different this film is going to be, doing exactly what the directors wanted—meeting expectations only to then subvert them. This middle entry is a total change of gear, a pitch black comedy with a dash of farce (though before “pure” horror lovers balk, note that this Transmission is punctuated with moments of brutally visceral, flinch-inducing violence, hitting with full force in relief to the comedy). It evokes the sheer lunacy of the Hatter’s tea party, adds a pinch of Monty Python and throws in the terror of dining with Grandpa in The Texas Chain Saw Massacre.

“Escape from Terminus,” as directed by Bush, is different yet again, taking time to acknowledge the science fiction angle of the story’s premise, combined with some memorably mind-bending moments. Whilst managing to deftly bring together all the assembled threads, it also delivers an emotionally satisfying resolution that still remains rewardingly ambiguous. By this, I don’t mean a cheap trick, twist or shock finale—the denouement is simply one that is open to interpretation, giving viewers food for thought as the credits roll.

Not content to go the usual “zombie apocalypse” route (where the narrative follows a band of survivors coping with hordes of crazies), the creative triptych have broached larger, more philosophical ideas. Where their unique approach truly bears fruit is in the way it allows us inside the terrifying depiction of insanity that the signal causes. We bear witness to the infinitely more unsettling notion that these “mad” people, their perceptions altered by the signal, are completely unaware of their actions, believing themselves to be acting in a perfectly logical fashion. It’s chilling because there are no simple “heroes and villains” on these terms, not even “Us vs. Them.” If psychosis and paranoia were communicable in this manner, “Them” could be “Us,” and we would have absolutely no way of knowing—we might think we are acting reasonably by clubbing that old lady to death, convinced she is one of “Them,” when we are really the insane ones, attacking someone without cause.

It’s a concept that forces us to consider the essentially solipsist nature of our existence and reconsider how we define the boundaries of reality. We are slaves to perception and ego, our “objective reality” formed by consensus. If something were to change those perceptions on a grand scale, there no longer remains any ability to ascertain what is real and what is merely in our heads. It can be seen as commentary on an increasingly isolationist society, one ever more dependent on technology to mediate our interactions. It’s also a stinging critique on how media can warp events and interpretations of same for the masses. With each segment viewed from a different character’s perspective, the fragility of our definitions regarding sane/crazy or real/fantasy is brought into sharp focus; we could easily lose control of ourselves and yet remain perfectly oblivious. Moreover, this approach justifies and unites the three differing styles of the directors, emphasizing the individuality of each character and their perception of events as they unfold.

For such a modest movie, it’s filled with big ideas done well. Though we can always wonder what might have been accomplished with a larger budget, the constraints seem to have been fertile ground for breeding solutions, proving the old maxim, “Necessity is the father of invention.” The Signal is creative, intelligent, and one of the few movies that truly immerses the viewer in the terror of madness. Any fan of horror should seek it out. But then, that’s just my perspective.

Aaron Gillott lives in Mexico with his ghoulfiend Angelia (to whom he is eternally indebted and indeed contractually obliged to mention her awesome taste in films) and their two teenage frankenbeasts (all proud horror lovers). He divides his time between teaching, cursing the utility companies with every dark art in the book, and writing when the moods are upon him. He also occasionally contributes movie reviews to www.gorepress.com.