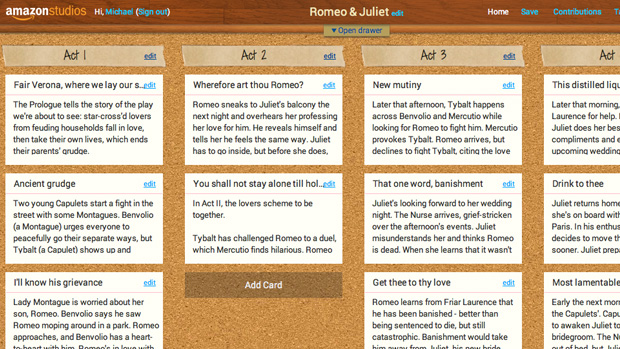 by Michael Murie
in Filmmaking, Screenwriting
on Jan 13, 2014

Amazon continues its adventures in moviemaking. Amazon Studios, which began as an effort in crowdsourced content is moving towards content produced by professionals, but they still seem to be interested in moviemaking by the masses. They’ve already released a free storyboarding tool, and now they have Amazon Storyboarder, a tool for outlining stories using a corkboard metaphor. 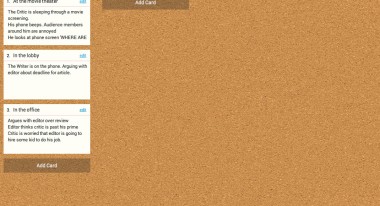 It’s free – you just need to create an Amazon Studios account – and it’s reasonably full-featured; you can add cards and move them around, and you can even share your projects with others and get their input. While the formatting of cards is basic, cards can have images and notes attached to them. The only real downside I can see are the limitations in exporting the outline when it’s done.

Using the tool does not give Amazon Studios any rights to your story. This is explained in the FAQ:

We don’t acquire any ownership or option rights in your property when you use Amazon Storybuilder. However, if you want to submit a script, mini-bible, or video for Amazon Studios’ consideration, you will need to start a new project and agree to the Development Agreement and Option Agreement.

One other great feature of the tool is that it works on your smartphone or tablet. I tried it on an iPad 3 and was able to create a project and add cards to the corkboard. The only thing I couldn’t seem to do was to drag a card from one location to another, a feature available on my MacBook. You must be connected to the network while editing.

You can add contributors to the project who can add notes and images to notecards, though they can’t edit the cards directly. Contributors must have an account on Amazon Studios and they also can’t delete or edit the notes they create – they have to add extra notes. The primary author can delete the notes. If two people are simultaneously editing a project, the update of notes between the two accounts doesn’t always happen immediately; I found I had to exit the project and go back into it to be sure to see the latest additions. 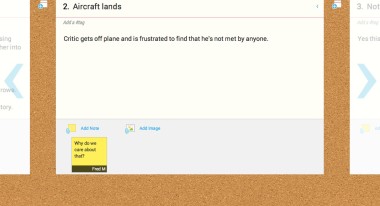 So it’s free, what’s the downside? While Amazon makes no claim on your story, they don’t give you many options to export your story, or move it beyond the Corkboard form. You can print it, but you can’t do anything else with it at the moment. Amazon says you can export it as a PDF, but I couldn’t find a function that did that, so I assume they are suggesting you export the “printer-friendly” format page to a PDF in your browser. Neither option is the most useful for moving anything into a word processor.

The product is described as being in beta, so it’s possible that other export options will be added later. Amazon now has a corkboard and a storyboard tool. It would be odd if they weren’t working on some sort of scripting tool to tie everything together.