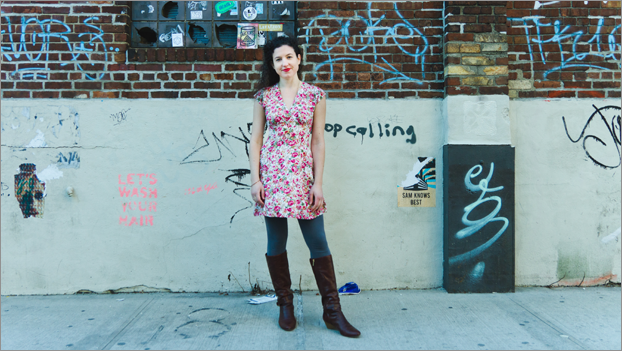 When I asked where the most film-related location for our photoshoot might be, director Kate Barker-Froyland suggested that we meet in Williamsburg. Her feature debut, Song One, starring Anne Hathaway, is a film about the love of music which weaves its story through Brooklyn and lower Manhattan, which are areas that Barker-Froyland herself frequents often.

We met for breakfast at the Reynard Restaurant in the Wythe Hotel on an assaultingly cold winter’s morning. Still, Barker-Froyland was upbeat and ready to take to the city streets in just her sundress, wind chill notwithstanding, to get the right shot.

While most filmmakers seem to have an underlying (or often overlaying) aura of stress and even dread around them as they are in the final weeks before picture-locking their movies, Barker-Froyland was calm and poised. “I can’t believe the film is actually going to be finished,” she reflected wistfully, telling me that the making of this movie has been a several-year-long journey.

Also at our meeting was Barker-Froyland’s husband, Thomas Froyland, who is a producer on the film. He told me about the first day on set watching Barker-Froyland, a first-time feature director, directing two Oscar-winning actresses, Hathaway and Mary Steenburgen. “It was incredible to see three such strong women working together,” he said. When I asked Barker-Froyland if it was intimidating to direct such acclaimed actresses, she smiled and said that “they made it so easy to work with them.”

Barker-Froyland: Song One is all about music and the power of music to connect people, whether they’re strangers or family. A song can be so powerful – it can elicit such an immediate emotional reaction in the same way a specific smell can bring back a memory. Most of the film takes place in Brooklyn, where I live, and we shot in many neighborhood places that I go to regularly. I wanted to record all the music live and to capture the music of the neighborhood and the city – while also capturing how music is like this connective thread between people.

Barker-Froyland: A lot of the crew was female. It wasn’t really a consideration though, because I love working with men too. Our d.p., John Guleserian was fantastic and in the case of hiring the d.p., I think it’s about having a strong connection with that person, whether it’s a man or a woman. I felt like I could communicate with John really well and that we had the same film references and aesthetic. I loved working with our editor, Madeleine Gavin, and actually the whole editing team turned out to be all women, which was cool.

Barker-Froyland: I feel that I was really lucky to have such a passionate team of producers, with Anne Hathaway, Adam Shulman, Jonathan Demme and Marc Platt. All of them have been so dedicated to this project and cared so much about the film from the start. I think that was a key part of pursuing funding.

Barker-Froyland: I think probably it would have been different, yes, because the story is so much about a young woman’s journey and her connection to the world and her family. Annie [Hathaway] and I are the same age and as women we’re able to relate to things about the character, Franny, in a certain way that I don’t think a man necessarily would have.

Barker-Froyland: Skyfall was for me the best blockbuster of last year. I loved it.

I thought it was beautifully shot and for being part of a big franchise, the filmmakers did a superb job of layering characters you think you already know.

Barker-Froyland: I love directing and working with actors as much as I do writing. My goal is to direct as much as possible – music videos, commercials and also another feature as soon as possible.

Barker-Froyland: I’m really proud of the performances by the actors and musicians in this film and very excited to show Song One to audiences at Sundance. I’m really looking forward to meeting more people in the industry and I hope being at the festival will make it possible to show the film to movie-goers throughout the country. Of course, similarly to other filmmakers, we’re hoping to secure a distribution deal so that we can share our film with a wider audience.

Filmmaker: What is a question I should have asked but didn’t that you think is relevant to this film?:

Barker-Froyland: Do you think that female directors are given the option of directing the same range of films as men?

I think it’s really important for female filmmakers to not be pigeonholed into making one kind of film. I’d like to do a range of films as a director.