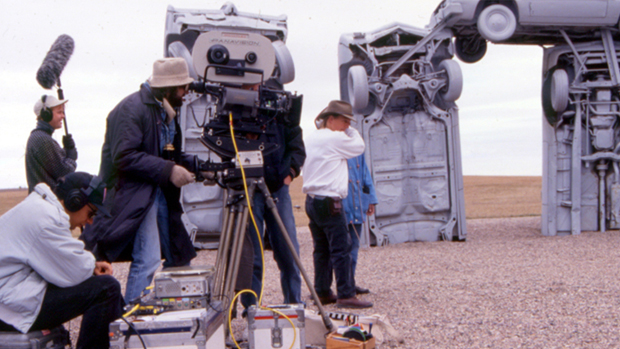 As the Slamdance Film Festival celebrates its 20th year in Utah, it’s worth noting the festival’s unique connection to a state one time zone to the east: Nebraska. Founded largely by two teams of filmmakers who’d shot their first movies in the Cornhusker state — paving the way for filmmakers like Oscar-nominee Alexander Payne — Slamdance has had a long history intertwined with the film movement known as “New Husker Cinema.”

As a Nebraska native doing my USC thesis in late 1993, I teamed up with Omaha-based producer Dana Altman, grandson of Robert Altman, to make Omaha (the movie) — one of the first indigenously made films with an all-Nebraska cast and crew. When we first showed the film at the IFFM (now known as IFP Week) in the fall of ’94, we met filmmakers Shane Kuhn and Brendan Cowles, who’d also shot their film Redneck in Nebraska, just about a month before ours. At the time, the IFFM was known as the place to show your films to Sundance programmers, as Kevin Smith had done the year before with Clerks and get picked up for the festival. Surely, some of us who’d met there would wind up in Park City! But by the end of November, we came to learn that Sundance had rejected ALL 95 completed feature films that had screened at the IFFM that fall.

For better or worse, it was a time when indie film was getting co-opted by Hollywood: Miramax became part of Disney, Fine Line became part of Warner Bros, and Fox was launching Fox Searchlight. In that context, Sundance was focusing more on second-time directors with bigger budgets and had left behind a new generation of first-time directors.

“There was a sense in the mid-’90s that indie film — and Sundance in particular — was focused on New York or L.A. filmmakers. Those of us with midwestern roots felt isolated and needed to crash the party to survive,” says Dana. We teamed up with other filmmakers we knew — like Jon Fitzgerald, Paul Rachman, Lise Raven, Eugene Martin and Peter Baxter — and Slamdance was born. Our first year, we had a dozen features and a dozen shorts, and held screenings at the Prospector and Yarrow hotels in Park City, as well as screenings in Salt Lake City. The festival that would ultimately launch the careers of Christopher Nolan, Marc Forster, Benh Zeitlin, Lynn Shelton, Drake Doremus and Oren Peli had arrived. Rian Johnson (Brick, Looper; Breaking Bad), had even worked as a production assistant on Omaha (the movie) and later had two short films play at Slamdance.

Based specifically on our experience with Omaha (the movie) — which had a cameo by then Nebraska Gov. Ben Nelson — the state inaugurated a film commission. The next year, fellow Omahan Alexander Payne wanted to shoot his debut feature Citizen Ruth in his home state, but his producers insisted on Austin. We met with Alexander and helped him persuade his team that there was now a viable working crew and cast base in Nebraska. Four films and six Oscar nominations this year alone, Payne is now synonymous with Nebraska filmmaking.

But the movement we call New Husker Cinema goes beyond Payne and has intersected the Slamdance universe on several occasions. Dana Altman, in particular, has incubated and mentored numerous filmmakers through his downtown Omaha studio, North Sea Films (where he proudly displays every Slamdance poster since 1995). Dana produced Nik Fackler’s Spirit Award nominated, Lovely, Still and his current award-winning film Sick Birds Must Die, which premiered at the Woodstock Film Festival in the fall.

Numerous Nebraska-bred filmmakers have screened their films at Slamdance over the years, including:

The Slamdance-Nebraska connection has always been slightly more than coincidental. The Omaha World-Herald and other local press have covered Slamdance since its inception, and Nebraska filmmakers know they’ll get a fair shake in the Slamdance programming process, even in the years when I’m not doing programming. The unique nature of Slamdance’s programming (alumni programmers, non-hierarchical consensus decision-making, and no early invitations or selections), intrinsically lends itself to an even playing field. Last year, I didn’t even know James Duff, who’d been my 2nd AD on Omaha (the movie), had submitted his film until after Slamdance announced it was selected for competition.

Dana and I showed our most recent collaboration, Between Us, starring Julia Stiles and Taye Diggs, out of competition at Slamdance 2013 (and yes, we did pay our entry fee and submit ourselves to the programmers). The award-winning film, which was partially shot in Nebraska, enjoyed a 50+ city release in 2013 and is now available on Showtime, Starz, and all VOD and DVD platforms. Meanwhile, Omaha (the movie) is now available in a 20th Anniversary edition on Amazon Instant and Fandor, just in time to tie in to Peyton Manning’s inevitable shouts of “Omaha, Omaha” during the upcoming Superbowl.