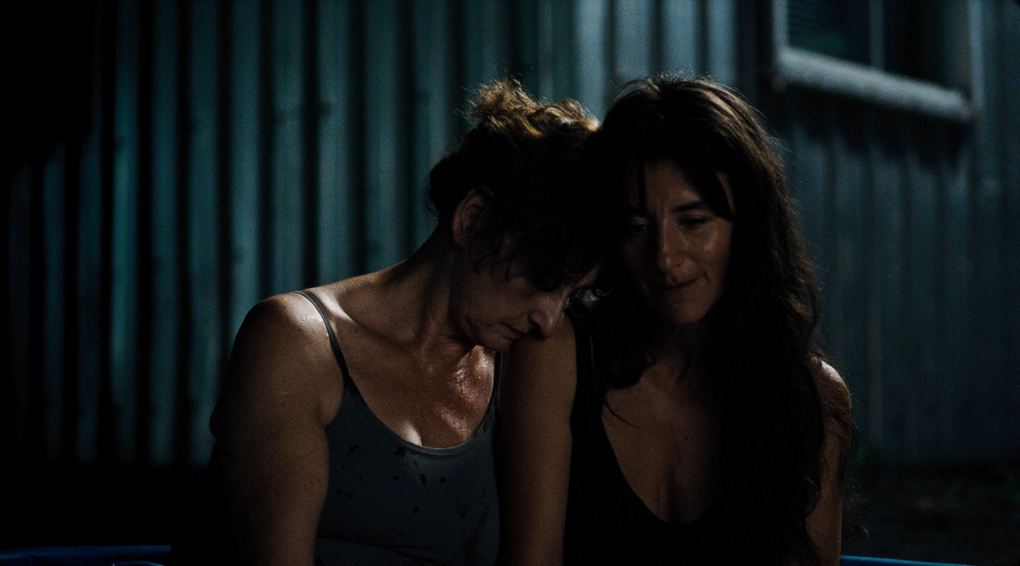 by Steven Erickson
in Directors, Interviews
on Feb 4, 2014

Quebecois filmmaker Denis Côté makes an unassuming, unabashedly regional kind of cinema, drawing on the rhythms and landscapes of his native province. It’s taken him a long time to get attention south of the border – I had to travel to the Toronto Film Festival to see his first film, Drifting States. He seemed to have a breakthrough of sorts in the U.S. with Curling, which at least got some attention on the festival circuit and was acquired by New Yorker Films, who never released it. Bestiaire, a semi-documentary shot in a Montreal zoo, got him more attention, and Vic + Flo Saw a Bear, a lesbian romance about a pair of ex-cons that morphs into more horrifying territory, promises to be his first real U.S. release. Refreshingly, Vic + Flo Saw a Bear avoids most of the tropes of films about lesbians made by straight male directors. It never objectifies its actresses and shows an equal amount of male and female skin. Filmmaker talked to him in New York in January, during the Museum of the Moving Image’s “First Look” series (where Vic + Flo got its local premiere.)

Filmmaker: Before I saw Vic + Flo Saw a Bear, the title seemed quite flippant. Now that I’ve seen it and know what it’s referring to, it seems tragic. If you can answer this without spoilers, how did you settle on the title and what does it mean to you?

Côté: I knew the film would be filled with mood swings and visiting a lot of genres. It would be weird. I didn’t know if it would hold together. With the title Vic + Flo Saw a Bear, you don’t know if Vic and Flo are men or women, or animals. There’s a sense of menace. Maybe people will see a bear, maybe they won’t. Is it a children’s film? Is it animation? So I think the title embodies all the energy of the film. You don’t know what you’re coming to see. The film really fits the title. I like the misleading nature of the title. When the film is over, I was terrified: there’s some drama, some sick black humor, a love story. I was really afraid. I feel much more comfortable with it after winning a prize at Berlin. Some people feel more comfortable with the intimate love story and get lost with the horror stuff at the end. Others prefer the ending. I like the fact that I put myself in danger. It’s not a safe film. It’s possible you’ll totally hate it.

Filmmaker: As a straight man, did you have any trepidation about making a film about a lesbian couple?

Côté: I like the way you phrase that question. No. First of all, the first draft of the script was about two guys. I knew I had to work with two men or women because the characters met in jail. That’s why they were together. To me, they were two human beings who fell in love in a very strict environment. Then I met a parole officer and talked to her. She said “Women meet in jail and create security couples. After one week, they need to be seen hand in hand with another inmate. That doesn’t mean they’re gay. Sometimes they spend 15 years in jail, and they don’t want to have anything to do with men anymore. They stay with women.” Now that the film is traveling, I need to meet the gay audience and press. At every screening, there’s always one angry lesbian. When I ask her, I discover a reality I didn’t know about. Apparently, it’s a huge cliché to kill off your gay character. Being that I’m a straight guy making a film about lesbians, they really hate that. I understand the distributor and sales agent wanting to push the film towards a gay and lesbian audience, but a lot of things get lost in translation. For me, it’s about two human beings in love.

Filmmaker: Compared to a film like Blue Is the Warmest Color, I thought there was a refreshing lack of voyeurism, and I also appreciated that you include gay male characters and often show them with their shirts off.

Côté: Watching Blue Is the Warmest Color, I was quite indifferent. I think it’s a totally voyeuristic approach. I had no intention of filming anything shocking. These women are not what we conventionally consider beautiful. Gay issues are not there. I’m quite proud that my characters are gay, but we don’t care. I wanted to make Guillaume, the parole officer, gay in order to close the door between him and Flo, so she won’t try any moves on him. There was no more agenda than that.

Filmmaker: You live in Montreal, but your films are mostly set in rural Quebec. What attracts you about that kind of landscape?

Coté: I’m a very urban person. I don’t have a driver’s license or a car. The last time I went to the countryside was to shoot Vic + Flo. Every time I’ve been to the countryside has been to shoot a film. I just feel more free in the countryside because it’s a place I don’t know. Filmmakers say “You need to film stuff you know about,” I totally disagree. If I meet you and you live in a family, my sense of amazement comes right away. I don’t need to know you for eight months. I think Herzog films things he doesn’t know about and that’s why the films come out so well. He’s amazed at what he’s looking at. For me, a forest is not a peaceful peace, it’s a dangerous place. When I see a lake, I never swim in it. I’ve never caught a fish. Of course, there’s a monster in that lake! In the countryside, I feel like my characters have more opportunities to take risks. If I put my camera right there {points out the window to the Lower East Side street outside his hotel}, I’d know all the codes of urban areas. Hidden in your cabin in the woods, you’re so free to do anything. I didn’t want to live with the man in Carcasses for six months. I was discovering things with my camera. That’s why there’s a lot more mystery in Vic + Flo. I went to an unknown area. I like that tension.

Filmmaker: Being a Quebecois filmmaker and working in French, do you feel like you’re a protective distance from the pressures and temptations of the Anglo-Canadian film industry?

Côté: That’s very interesting. If you make art cinema in Quebec, you obviously look towards France. We want to make contacts with French distributors, producers and the Cannes Film Festival. People in Toronto and Vancouver want to go to L.A. and New York. They’re not as connected to Europe as we are. France and Quebec are really connected, and protected from the Hollywood influence. We have a special place to make cinema, with a lot of cultures meeting. Toronto and Vancouver filmmakers will never talk to you about France. They don’t get to see those films easily. Maybe that’s why Quebec cinema is much more alive than Anglo-Canadian cinema. For the last 20 years, we’ve talked about the same three filmmakers: Cronenberg, Egoyan and Guy Maddin. Can you name anyone else from Anglo-Canadian cinema who’s really a big talent?

Côté: Shows promise! And every three years, there’s a guy in Toronto or Vancouver who does the same. Meanwhile, in Quebec we make 40 films a year. We have guys who are going to Hollywood, like Jean-Marc Vallée and Denis Villeneuve. Xavier Dolan is going like this {makes “rising” gesture with his fingers.} Our cultural DNA is much more original. Personally, going to English Canada feels like going to another country. We don’t share much, culturally and politically. It’s really two countries.

Filmmaker: I have to say that the only Canadians I’ve met who are enthusiastic about Canadian cinema have been from Quebec. English Canadians tend to be apathetic or self-depecrating about it.

Côté: First of all, they’re jealous about what we have in Quebec. We have a lot of money and produce a lot of films. They don’t speak French and don’t know our industry. What’s the difference between making a film in Toronto and making a film in Boston or Denver? I know it’s mean, but English Canada is the United States. What is Canadian culture, really, compared to American culture? When you watch a Quebec film, it’s a foreign film, with a foreign sensibility. I get E-mails from Toronto filmmakers looking to find Montreal producers. I won’t say they don’t have a culture, but what is so specific about English Canada? Quebec cinema has a special spice.

Filmmaker: For you, was film criticism a way of preparing yourself to become a filmmaker?

Côté: I became a film critic totally by accident. When I was young, I studied filmmaking and made short films. Then, someone asked me “Would you like to talk about films on the radio?” I said “OK.” Then I got a job in a newspaper. This was 1998, and I had never touched a computer in my life. I worked for seven years as the cultural editor of a weekly. I had no boss. I would give a full page to an Abbas Kiarostami film and a paragraph to Spiderman. So I made a lot of enemies. But I was really a film critic by accident, not a critic dreaming of making films. I was always making shorts. I didn’t prepare for anything on the job.

Filmmaker: Why do you think it’s taken so long for your work to find an audience in the U,S,? Also, why did Curling find an American distributor but never get released here?

Côté: The U.S. distributor was New Yorker. Do they even still exist? They picked up the film and didn’t do anything with it. You can answer this question better than me. I’m a festival guy. People tell me I’m a “film festival director.” It’s not false.

Filmmaker: I think part of it is that the films seem very intensely local and tied to Quebec.

Côté: The other problem is that I don’t have a social angle to my films. You can’t say what Curling is about. It’s closed in on itself. Bestiaries is not really a documentary about zoos. It’s something else. Can you imagine trying to sell a film called Vic + Flo Saw a Bear? It’s not this, it’s not that. All the energies of the film cancel each other out. For sales agents, it’s nice to pinpoint something. It’s hard to pinpoint anything in my work.

Filmmaker: What attracted you about the documentary elements in Bestiaries? It’s the closest you’ve come to making a conventional documentary.

Côté: I’m allergic to a specific genre. I need to blend them. If I’m starting to make a documentary, it has to morph into something else. I’m not obsessed with entertainment. I’m not obsessed with narrative or storytelling. I’m interested in forms. That’s why Vic + Flo goes this way and that way. Maybe I’m a bit too cold. I need to oppose forms. Bestiaries looks like a documentary, but 50% of the sound is totally recreated. I just finished a film set in a factory, which is a documentary but must be sold as fiction because there are several actors. I like films to be messy.