WorkingIndie.com: A New Way to Network 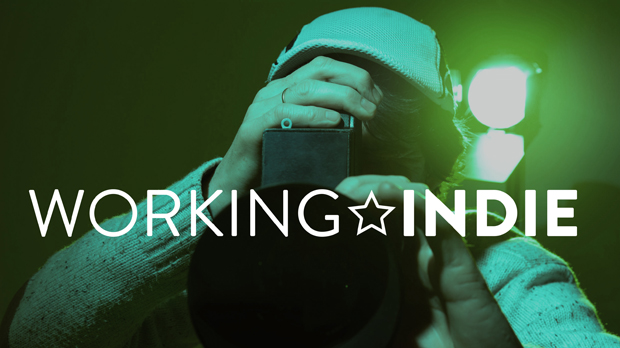 When I was in film school in 2004, we spent a lot of time flipping through binders of head shots and reading resumes on sheets of paper. As the Internet revolutionized social networking and sites like Shooting People and Mandy.com got filmmakers’ and actors’ information online, the casting and crewing process was turned upside-down, and definitely for the better.

But there are still limitations to what the Internet can do. The main problem is penetration, getting everyone on the same network; second to that is searchability, being able to find the right people who are on the network you’re already on. In other words, there are still many ways the Internet could better help us find our ideal collaborators. (Though at the same time we shouldn’t forget the value of getting off the couch and doing some face-to-face socializing.)

David Anthony is aiming to fix these problems with a new film networking site called WorkingIndie.com. The beta version is about to launch, and Anthony and his collaborators are still looking for filmmakers willing to participate; there’s a link to sign up on the Working Indie homepage. Here’s what Anthony had to say about what Working Indie is and how he hopes it will differ from the networking platforms that are already out there.

Anthony: WorkingIndie.com is a web-based community (a “network,” if you will) designed to accommodate independence in filmmaking. Artists such as directors, actresses, cinematographers, grips, set designers, composers, FX artists and more can meet, connect, and collaborate with one another. We feel that there is an insanely deep pool of talent all over America (and the world) that is simply overlooked because of a lack of opportunity. Some of us can’t roll the dice and move to L.A. on a whim because we have kids or sick parents we’re responsible for. Some of us simply don’t like the mainstream system of filmmaking, despite the fact that we truly love being a part of films.

These are not issues that should rob us of great opportunities for artistic and professional advancement in the 21st century. There are too many talented directors that live in small towns with no access to the ambitious actresses that are looking for them. If the perfect actress for your lead lives two hours away, it is totally doable to have her cast in the film, but the likelihood of you knowing that actress exists without some kind of online tool to make her findable is pretty slim.

Our goal is to make it easy and efficient for a filmmaker to crew up with other independents that can see their vision.

Filmmaker: There are lots of similar networks already out there, from LinkedIn to Facebook or Meetup groups to local IFP chapters. What do you hope WorkingIndie.com will do to differentiate itself from all of these?

Anthony: Well, we’re in the software business, so someone could decide to start work on a WorkingIndie clone the day we go live. And if someone does it better than us, I hope that’s where people will go. But we are launching with feature-rich, responsive profile pages that provide users with a beautiful and searchable profile, like a uniform digital press kit (stored in the cloud) that we hope impresses you when you compare it with other options.

What we set out to do when we first started working on it a year ago was to create a protected community for independents. What I mean by that is that we are launching free of ads, we are funding completely out of pocket, and we are really trying to keep any elements of “outside sphere” influence to a bare minimum–even from ourselves to some degree.

The current plan is to launch the beta with really limited features, maybe just profiles, search, and feedback, so the independent film community can democratically decide what features they want to add on.

Filmmaker: What type of work do you hope will come out of it?

Anthony: I’m kind of a weirdo. My favorite filmmakers are Alejandro Jodorowsky, David Cronenberg, and Takashi Miike, so I would love to see more stuff from twisted independents like Logan Myers, Trent Haaga, Shannon Lark, Drew Bolduc, Astron-6, and James Anthony Bickert. If this tool helps any of those folks make another higher quality yet less expensive film, I would feel pretty good about what we’ve done. Which is kind of a weird statement if you are familiar with any of their work. But they are all great artists, sweet people, and have incredibly unique visions. The (sometimes subtle) brilliance and mind-blowing creativity these artists exhibit is way more important to me than any “shock factors” that they are often associated with.

More widely, I want to see the independent film community as a whole become just a little more autonomous and financially viable. It is incredible to have companies like Magnet, Magnolia, IFC, and many others that I can’t begin to name backed by big money and throwing it at great independent filmmakers. Those are all great places to be. Imagining a world without companies like these or publications like Filmmaker magazine that genuinely reach out and help the truly independent film community is bleak indeed.

But if an actress never connects to the right director, we may never see what she is capable of and she may never see any real opportunities in her career. If a great director never finds a cinematographer she can gel with (artistically and personally), she may never see her true vision realized, in any of her work! That doesn’t seem necessary to me in such a connected age. The “right” actress/cinematographer/ screenwriter/etc. should be a few mouse clicks away, and she should be able to make some kind of modest living, at least, which requires semi-regular bookings.

Filmmaker: You mentioned that the community is going to be an active component of how the site progresses. Can you talk a little about how that will work?

Anthony: The details are still pretty flexible, but I can say that our goal for this community is to run it as a democracy. Virtually all sites collect user feedback and make decisions based on that, but we genuinely want to put key decisions up to a community vote and provide some levels of transparency that aren’t typical of a commercial networking platform.

That sounds pretty utopian and all, but we have to work out the actual logistics and details. We have to address all kinds of things, like making sure no malicious users find a way to “game” our political system, how representatives might be elected and the terms of those elections, etc. Once the community is more established, I hope to take some of our options to a voting public before we announce the “moving parts” of how the governing system will work. So that is definitely on the roadmap, but a lot of details need to be ironed out.

Filmmaker: So how is the development of the site progressing? Can you say anything about the financing of the project?

Anthony: We actually hit a major milestone ahead of schedule, so as of this interview we are projecting about 30 days before the live beta release. It’s been over a year in the making between analysis, designing, budgeting, planning, assembling the right development team, prototyping, etc., so it feels great to be where we’re at.

All of the financing so far has been out of pocket, which isn’t always easy, but (I think) completely worth it. We believe that taking any sizable amount of money from investors would obligate us to put them first as opposed to the working indie user community, and that kind of defeats the whole purpose of what we are trying to accomplish.

We are toying with the idea of launching a crowdfunding campaign, in which you can vote for new site features with your contributions, so basically you can fund the features you want to see most. We’re not charging for memberships, we have no plans to include ads, and though we are generally comfortable with a few options we have, monetizing in general is still up in the air. This, again, is something I would personally prefer the community to have the opportunity to weigh in on, and a crowdfunding campaign could potentially allow us the buffer time and development dollars to take that question to the community at large before we are forced to make those types of decisions on our own.

But there are logistics there, too. We’re a small team on a small budget. Attempting to run a campaign like that properly will eat up 30-or-so days of development time, so the interest definitely needs to be there for the effort to benefit the indie film community that we are trying to serve.

That being said, I highly encourage all of your readers to sign up for notifications at WorkingIndie.com. You’ll get all major updates regarding the launch and other developments, optional surveys that help us create a better experience for you, and we won’t send you any spam or share your information. If anyone wants to be a bigger part of the project or has any suggestions, contact me. You’ll find my email address at the bottom of the page at WorkingIndie.com.