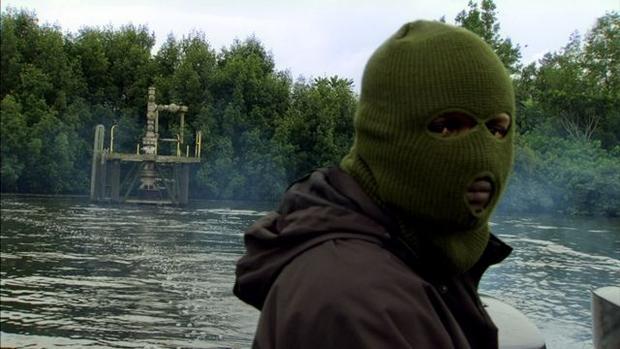 by Scott Macaulay
in Directors, Filmmaking, Interviews
on Mar 14, 2014

In a world of simplified, cable-news talking points, documentary filmmaker Rachel Boynton makes layered, complicated films exploring the nexus of politics and personality. With Our Brand is Crisis, Boynton — one of Filmmaker‘s 2005 25 New Faces — traveled to Bolivia to cover the 2002 election, embedding herself both within the campaigns of local candidates as well as the war room of hired-gun U.S. consultants Jim Carville and his GCS Associates team. Big Men, opening today, is her second feature, and it has similarly required an immersive, years-long process. She began the process of considering the film before its so-called inciting incident: the discovery of oil off the coast of Ghana in 2007. Her film winds up following a small American oil company, Kosmos Energy, and its genial yet beleaguered head, Jim Musselman, as he negotiates with Ghana’s government, various third parties, and his own investors for what could make him and his firm rich. The film also folds in the story of oil exploration in neighboring Nigeria, with armed “oil militants” sabotaging rigs in the delta. What results is a fast-paced, thrillingly cinematic picture that refuses to sacrifice deeper political and even philosophical questions for storytelling verve. Big Men opens today in New York at the IFC Center.

Filmmaker: So when did the idea for Big Men arise, and how long have you been working on the film?

Boynton: I started thinking back in 2005, after finishing Our Brand in Crisis, about everyone talking about the high price of oil. The price was going through the roof — there was this panic about $100 (barrel) oil. But while I was seeing a lot of coverage, I wasn’t seeing anything from inside the business. I’m always interested in the perspective I’m not seeing, so I thought it would be interesting to get inside. I started researching the oil business generally, and then I hit upon this trend — the enormous emphasis on getting oil from West Africa. And at the end of 2005, the militancy started in Nigeria, the kidnappings. So, conflict — there’s a movie. I thought I’d go and make a movie about that — to go to Nigeria, get access to an American oil company there, and place this story inside a larger context. The “big men” theme emerged from that place and subject matter, how I was seeing and responding to his.

Filmmaker: The film’s ability to juggle different viewpoints is striking. There must have been a simpler, less layered version of the film that would have been possible with the material. What led you to the current multi-viewpoint approach?

Boynton: That’s my brain on screen; my mind works in complicated ways. I see layers. I don’t see things in a simple, black-and-white way. It’s very much a reflection of me and how I see the world. The film is designed to work in a lot of different ways. I wasn’t interested in making a film that was just one thing. On the one hand it’s an exciting thriller story. On the other hand, it’s a philosophical movie about human nature, the ripples of self interest, and how greed touches the lives of people, countries and governments. [It’s about] these concentric circles, how self interest connects to the small and the large.

Filmmaker: I think left and liberal documentary audiences are accustomed to seeing Western oil companies as automatic villains. While the film is certainly critical, it also has empathy for your American oil men, particularly your main subject, who comes across almost as a Willy Loman-type subject. Was that a result of spending so much time with them, or from a decision made earlier on?

Boynton: Our Brand is Crisis was really well received, but one of the things that troubled me with how it was received was that people were applauding the movie but reviling the people in it. By interpreting the movie that way, it absolved people from looking at what the movie was saying. While a lot of people take issue [with this decision] and want a villain, with this film I made a specific choice as a director to work against that. And in a certain way, it was a response to my experience with the last film. I was interested in not allowing the audience to absolve themselves from involvement in the story by being able to label “the perpetrator.”

Filmmaker: How did you connect with the subjects?

Boynton: I bought a plane ticket to Lagos and had three phone numbers in my pocket. One was for my husband’s business partner; her brother had gone to school with a Nigerian guy. My next door neighbor was friends with a Nigerian, and a grad student at Columbia gave me two phone numbers of guys she met in the Nigerian delta. My first trip lasted three weeks, and I started by making phone calls, and then I flew back. At that point, I thought it would be a fast [process]. I gradually came to terms that the research phase would take way longer. Getting inside an oil company doing anything of any importance, with final cut, with control of your material, that just doesn’t happen. That was the most difficult thing: finding the right company to say yes to me, and it took a long time. The other side is the militants — they don’t allow women in their camps for religious reasons. Getting them on the phone is hard, but getting to live with them as a women is really tough. Every story [in the film] is 10,000 phone calls and crazy rides to small towns. And I was doing it all myself, not working with a fixer. I was meeting people, making connections and trying to keep us safe. During that time, there were several foreign doc film crews arrested and deported. The fact that we weren’t I’m proud of because it has to do with those relationships [I built.].

Filmmaker: Did you bring a camera with you on that first trip, or was that pure scouting?

Boynton: We didn’t bring a camera, but there’s a sequence in the film, the pipeline fire sequence, that is the first thing I shot. I had this little HVX200 I was testing out as a backup camera because the P2 card system was very new at the time. I was nervous, and I wanted to test it out and see how it worked. I did this “new camera test trip to Nigeria,” and that was very first thing that i filmed.

Filmmaker: What is your secret to succeeding at these long-term documentary projects, to stay with your subjects over so many years?

Boynton: I’m really persistent. I don’t take no very easily. I say, “Explain to me why you’re saying no.” The second thing is, I respect people’s limits. I’m not doing “gotcha filmmaking.” I’m not trying to embarrass people. If they want me to leave the room I do. My goal is not to film them with their pants down, so to speak. My goal is to create a relationship that’s real and to be persistent because when they sign up for the program, they don’t realize how long they are going to have to stick around for. [On this film, the drilling for] first oil kept getting pushed back, and [Kosmos] said, “Why are you still around?” Especially in moments of crisis, the capacity to stay with the story, when the shit hits the fan, only happens when you have relationships and [your subjects] trust you. You have to build a trust that’s sincere and real without being their hired filmmaker.