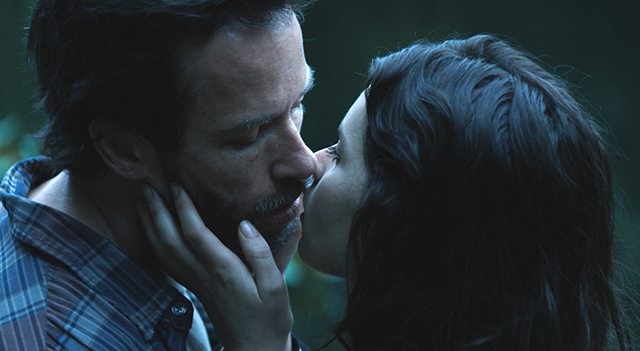 by Brandon Harris
in Director Interviews, Directors, Interviews
on Mar 27, 2014

Drake Doremus’ Like Crazy – a gauzily photographed love triangle drama that won Sundance – didn’t burn up the box office, but it opened up a number of doors for the third-time director and his atmospheric followup. By turns strident and sentimental, Breathe In feels like a step forward on a number of fronts. As the 30-year-old director told Filmmaker recently, the film was more or less not scripted, but it has the tension of a tightly wound product of a veteran screenwriter.

Guy Pearce is Keith, a married music teacher full of longing for his zesty younger days who risks everything when Sophie, a charming British exchange student with a finely turned music ear (Felicity Jones, the fetching star of Doremus’ previous film), comes to stay with his wife Megan (Amy Ryan) and daughter Lauren (Mackenzie Davis). Some have suggested the movie is overly indebted to other tales of menopausal malaise and suburban discomfort (American Beauty, anyone? Anybody remember Nobody Walks?) The film walks the tightrope of cliches delicately: the taboo relationship might not surprise anyone in the audience, but the verve Doremus brings to telling it will startle skeptics.

Breathe In opens in theaters from Cohen Media Group on Friday. 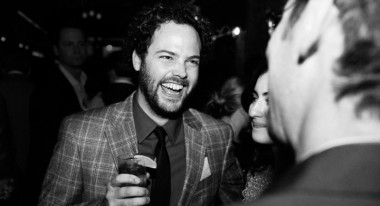 Filmmaker: Your new film reminded me a lot of Teorema. A stranger emerges and changes the dynamics within a family. How did it come about?

Doremus: We wanted to try the opposite approach from Like Crazy, try something totally outside of ourselves. The inspiration for the story was really just wanting to work with Felicity again and write something for her, pushing her to try and do a character that was very different.

Filmmaker: After winning Sundance with your last film, I imagine the struggle to put together a movie like this wasn’t as significant as it might’ve been on Like Crazy or some of your other lower budget films. Or was it more challenging in some way?

Doremus: I feel like no matter what level you’re at, you always need more money and you always need more time. It doesn’t change whether you’re making a $250,000 movie or a $5 million movie or $15 million movie. I feel like it’s a little more difficult just because there’s a few more moving parts. I think that’s just the goal every time out: growth as a filmmaker. To just try and work with bigger projects and have the movie open up a little bit bigger and create that line between making something that artfully rings true and also hits the line of commerciality and being able to reach audiences. I feel like you’ve got to create that line between what the movie is and what the budget is, but this one was a little bit trickier. We did it so fast after Sundance and we had great partners who were like, OK, you guys want to go so fast, let’s just do it.

Filmmaker: Certainly it has a control, a rigor I don’t think Like Crazy or certainly Douchebag had.

Doremus: It was a conscious decision to try and do something totally different. Every movie I do I really try to approach it differently. There’s so many instincts that will follow you around and always be in all of your movies that you don’t even have to think about, they’re just going to be there. But at the same time I think it’s really important to really conscious of experimenting with different palates and languages and locations. I feel like the whole upstate New York vibe was definitely a conscious choice, to get out of L.A. where I’d been making movies and try a completely different aesthetic and world and texture and weather elements and different things like that. So that was definitely right off the bat an exciting opportunity.

Filmmaker: I still think of Guy Pearce as such a youthful actor, even though L.A. Confidential and Memento were 17 and 14 years ago respectively. Was a major selling point for him that he would play a slightly more mature guy fearing that he’s past his prime as a musician, as a creative person? Was that an appealing thing to explore for him at this stage in his career?

Doremus: We’ve never really talked about any of that stuff, but I feel like he’s never improvised before and there’s a heavy amount of improvisation in the film. Doing it in a foreign dialect because he’s from Australia, it was very much an adventure for him to try and do something he’s never done before. So I think first and foremost that attracted him and I think that says a lot about him as an actor that he’s really excited most importantly by doing things that are scary that he’s never done before. I think he was really brave at heart and didn’t know what he was doing and was worried about it, but I always believed that he could. And I think the more he got into it the more he realized how much he loved doing it. And it actually was in him, and then he really embraced it. The part of him being attracted to the movie, I think the role itself is a complex character that he’d never done before, so I think that was definitely a selling point.

Filmmaker: Was there any point during the shoot where there was an epiphanic moment that steered you in a different direction in terms of what the project was actually about?

Doremus: I feel like every day that happens just by virtue [of the fact] that we’re working from a 60-page outline and we’re sort of exploring the themes and the emotional beats as opposed to just executing dialogue every moment. So I feel like based on the actual truthful dynamics in the actors, things constantly change. Personally in this movie I think we set out to make a little bit more of a dangerous, troublesome film. It ended up really kind of going back towards romanticism. I think that that sort of was a tonal shift that occurred during our shoot.

Filmmaker: Was that tonal shift immediately embraced? Or was it just in the actor’s performances that you suddenly saw it?

Doremus: I feel like it’s the opposite of uncomfortable for me just because I feel so romantic and love the idea of throwing caution to the wind. You respect the consequences and I think that’s what really excited me about this movie. I was thinking of it as a place in the sun where something so romantic and beautiful could blossom in the course of something so dangerous and dark. That was exciting to me.

Filmmaker: Once you got into the editing room were there things that you thought during the shoot went really well that maybe didn’t work? Or vice versa, things that you were a little unsure about when shooting that bloomed once you started putting it together?

Doremus: We auditioned about 200 young ladies for the part [of Lauren]. Mackenzie Davis came in and was sensational and she’d never done anything before in her career. Just throwing her into the mix with those actors, I was feeling uncomfortable with it. But then getting into the editing room and realizing like how way beyond her years she actually is, and how exciting that discovery was, ‘cause we didn’t quite know how that was all going to mesh, that was all really wonderful. Once we got in the edit room it was really apparent that she was stunning.

Filmmaker:  Were your shooting ratios higher than on Like Crazy or some other films that you’ve done, just simply by virtue of perhaps having a little bit more money? Obviously making a film that’s improvised, I imagine you’d shoot fairly high ratios anyway.

Doremus: Yeah, absolutely. I’d say about 30% of what we shot wasn’t even used. We just shot so many different things and so many things go right and other things didn’t. We went back and shot some more, added some stuff. It’s kind of an organic process when it’s coming together. There’s a lot of trial and error and there’s a lot of just shooting stuff, so the camera was constantly rolling. We’re just constantly giving different iterations of the same scene or moving it or changing it or reshooting it on a different day where there’s a slightly different concept. It’s just constantly evolving and based on instincts and whether something’s working or not.

Filmmaker: Was there something you left out that earlier in the process you were especially married too?

Doremus: Yeah, actually. This one scene in particular we shot that I really loved, but it just didn’t quite have a place. Sophie was washing a car and Amy came out and wanted to help and this very sort of awkward standoff between Amy and Sophie and it was supposed to go at the beginning of the third act. I loved the scene, there’s something really elegant and subtle about it. But ultimately we shied away from any kind of initial confrontation between the two of them.