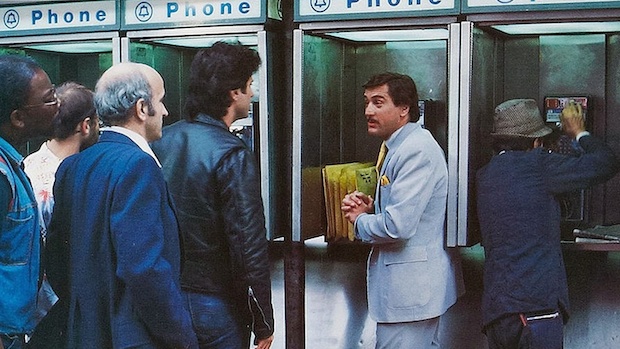 The King of Comedy from "Dirty Old New York"

Here are some of the articles I’ve read this week that I recommend for your Sunday afternoon reading.

“Whose Brooklyn Is It Anyway?” wonders A.O. Scott at the New York Times as he considers Spike Lee’s recent comments on the borough’s gentrification:

Every city is simultaneously a seedbed of novelty and a hothouse of nostalgia, and modern New York presents a daily dialectic of progress and loss. As Colson Whitehead notes in “The Colossus of New York,” you become a New Yorker — or perhaps a true resident of any place, whether you were born there or not — when you register the disappearance of a familiar spot. “You swallow hard when you discover that the old coffee shop is now a chain pharmacy, that the place where you first kissed so-and-so is now a discount electronics retailer, that where you bought this very jacket is now rubble behind a blue plywood fence and a future office building. Damage has been done to your city.” But this subjective landscape of memory and desire is built on an infrastructure of social and economic reality, on the concrete facts of race and class that Mr. Lee insisted on pointing out.

Author Geoff Dyer, whose recent Zona is a book-length essay on Tarkovsky’s Stalker, has moved to L.A. and had a stroke. It’s a mild one; he’s fine. At the London Review of Books, he has turned the experience into a typically thoughtful take on color, sight, mortality and the pleasures of the West Coast. Here he is getting an MRI:

There was only a short wait before I was fed into the scanner. The procedure was very similar – but quite different – to something I’d experienced a few days earlier in the Perceptual Cell in James Turrell’s retrospective at the Los Angeles County Museum. The highlight of that exhibition was to be slid into something that looked like an MRI machine by two assistants in white lab coats. Once inside you were bathed in soft blue light. There were two settings and I had, naturally, opted for the stronger. The light began to pulse and change. Headphones played beatless music that encouraged complete surrender to a non-corporeal world of pure light. As the fractal geometries and strobes of colour gathered pace it became impossible to tell whether these glowing patterns and acid flashes were emanations of an external world or were in your head. Deep space or inner space? Either way it was like a glimpse of infinity. Infinity, not eternity. The experience only lasted ten minutes; it was possible to lose track of oneself but not of time. I would like to have spent hours in there, a whole day even.

At Filmmaker we have been interested in the creative use of scarcity to manipulate the value proposition of independent film. Limited editions, private events and the like. (Lance Weiler wrote about this here in his Culture Hacker column.) But the Wu-Tang Clan may have taken this idea a bit too far with the announcement of their latest album, which will be released in an edition of one:

Like the work of a master Impressionist, it will truly be one-of-a-kind.. And similar to a Monet or a Degas, the price tag will be a multimillion-dollar figure.

Wu-Tang’s aim is to use the album as a springboard for the reconsideration of music as art, hoping the approach will help restore it to a place alongside great visual works–and create a shift in the music business.

It’s true that recorded music is often enjoyed in a solitary manner, through headphones. But even then the shared experience is important: file-sharing sites exploded in popularity not only because they allowed free access to music but also because the first thing that you want to do, when you listen to something you love, is to share it with others. The world’s biggest recording artists, including the Wu-Tang Clan, don’t achieve success purely through the intrinsic value of their music; they achieve success through the way in which their music is loved and shared. The love of music is a fundamentally communal experience, in a way that the appreciation of fine art is not. To turn an album into a unique object, belonging to just one person, is to defeat the very nature of music and music-making. This model from the Wu-Tang Clan does nothing for the cause of “reviving music as a valuable art”, to use their words. Instead, it simply mummifies and fetishizes it. It’s silly, and I hope it doesn’t catch on.

Chris Dorr imagines “The Audience Fund for Indie Film”: “A fund that aims to fundamentally change the way indie filmmakers think about their audiences and how they distribute their films.”

At his site Cagey Films, editor Kenneth George Godwin has published an extensive amount of material on David Lynch and the making of Eraserhead and Dune, including all the transcripts generated for a long article on the former for Cinefantastique. Included are Lynch, of course, but also Jack Nance, d.p. Fred Elmes, sound designer Alan Splet and more.

Simple advice that is a must-read: Be politely persistent. At his Both Sides of the Table blog, venture capitalist Mark Suster identifies the most important attribute for an entrepreneur — traits that would serve film producers, directors and freelance journalists well. At the end of his post he lists nine tips; here are the first four:

1. Well, for starters you need to be a great networker. I wrote an example of why this matters when meeting VCs but it’s true of all exec. Nothing beats a warm intro.
2. You need to know how to write good & action oriented emails.
3. You need to know how to make good phone calls and not be afraid to pick up the phone.
4. Understand reciprocity and how helping others earns you good karma points – and favors.

Speaking of business advice, at her blog VC Heidi Rozen reveals “What I Learned Negotiating with Steve Jobs.”

Again at the New York Times, Farhad Manjoo uses the discussion about the pirate streaming platform Popcorn Time to explain “Why Movie Streaming Services So Fail to Satisfy.” He writes:

Instead of a single comprehensive service, the future of digital TV and movies is destined to be fragmented across several services, at least for the next few years. We’ll all face a complex decision tree when choosing what to watch, and we’ll have to settle for something less than ideal.

For those of us with even slightly selective preferences, we’ll have to pick between different rental and subscription services offering different catalogs of programs, none very extensive, at vastly different price points. This sort of hassle and inefficiency sounds antithetical to the ethos of the Internet, where it seems to be your right to get everything cheap and fast. But for now, the Internet has met its match: Hollywood.

At the Dish, Andrew Sullivan has been following the reaction to Darren Aronofsky’s Noah, particularly that from the Christian community. In this round-up, though, he links to several critics who applaud Aronofsky’s decision to extrapolate from the biblical text rather than simply invent.

Annisse Gross has an excellent long interview with director Mary Harron at The Believer. Here is a passage on failure, anger and moving forward:

BLVR: Now that you’re a mother, what’s your perspective on how things have changed for women and what hasn’t changed?

MH: Well, it’s exciting to see my daughters and their successes. My youngest daughter wants to make films, and I think she’s going to be much more successful than either my husband or me. I see that women still have self-doubt, and at the same time I feel like I see all these fantastic young women, and they all have ambition and are so focused on their futures. I don’t think that’s an anomaly anymore. In the end there’s a tide that you can’t hold back. I think that with women, when they encounter setbacks and failures, there’s a way in which they have a hard time dealing with that. They say that depression is anger you turn on yourself, and I think women do that. I was reading about Giulietta Masina because I rewatched 8?½ recently. She is in it for a nanosecond, but obviously it’s about [Fellini’s] marriage, and I wondered about why she did so few films after La strada. So I went online and apparently after La strada she made a non-Fellini movie that was a failure, and she was so mortified that she stopped acting for years; that seems to me a very female thing to do. There is a tendency to blame ourselves or turn our disappointment inward, which can make it hard for us to go the distance. We have to find ways to not torment ourselves. Why should you react to failure with self-immolation? Fuck that. Everyone who has had a career has failed. There’s absolutely no point in beating yourself up. Focus on going forward.

At the New York Times Dealbook blog, Michael J. De La Merced writes about a new company, Junction, that is using the JOBS act to put a new spin on movie crowdfunding. If I’m reading the article correctly, Junction’s business plan is to allow the crowd to invest in mainstream films that have already been greenlit, with their money either cashing out the existing investors or to be used as an “additional cushion.” (An “additional cushion” for what? Budget overages? P&A? Fees?) The projects listed so far are classy — an adaptation of Dave Eggers’ A Hologram for the King, with Tom Hanks, and Triple 9, a John Hillcoat film starring Chiwetel Ejiofor .