Culture Hacker: Scarcity and Abundance in the Digital World 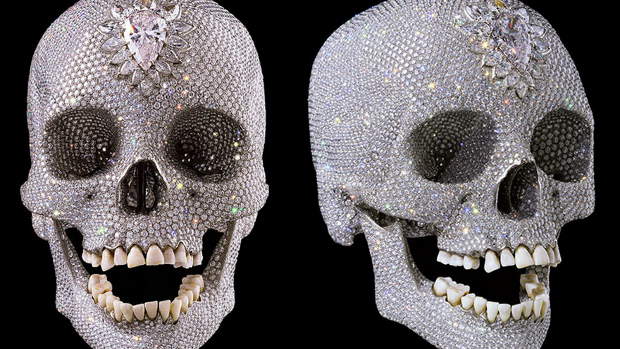 I’m obsessed with the concept of scarcity. The idea that scarcity can cause an object to have value well beyond its initial worth is fascinating to me. In 2007, Damien Hirst took an actual human skull, encrusted it in over 8,000 flawless diamonds and gave it a £50 million price tag. The skull sold in a shroud of secrecy as a group of private investors purchased it for a rumored £38 million — well beyond the £12-15 million it apparently cost to produce. Flash forward to 2012 and Hirst has joined forces with s[edition], a digital gallery and art marketplace. For $800, you can own “For Heaven’s Sake,” a 360-degree scan of a baby’s skull covered in diamonds. The run consists of 2,000 versions of the same digital file of which 27 have been sold so far. s[edition] is attempting to bring scarcity into the digital world by teaming with famous artists in an effort to make their work available in a series of limited editions.

Looking beyond the shock factor of the art, the notoriety of Hirst and the international press the project received, there is something interesting in general about the various ways a strategy of scarcity can be applied to new work, particularly of the digital kind. Outside of the art world, such strategies are being widely adapted by everything from crowdfunding campaigns (limited number of perks for those wishing to support a project) to deal aggregation sites and mobile applications (amazing deals available on a first-come, first-serve basis). At its core, scarcity taps into our desire to be a part of something unique and exclusive. It’s the thrill of discovering a new band hidden away in a small club or a gem of a film on the festival circuit long before the rest of the world. In these instances, it is not just the music or story that is compelling, but the whole atmosphere surrounding the experience. That atmosphere attaches itself to your feelings about the work, making you want to share it with others while bonding you to the friends you originally experienced it with.

Recently at the PGA’s Produced By Conference, Mark Cuban gave his prediction for what he believes to be the future of TV. “Kids are event-driven, going to groups, using social media to link up to these groups,” he said. “If you create unique live events that bring people in and make you want to be part of it, and it requires people to be in one place at one time, that differentiates you. It’s live, live, live.”

It appears, however, that Cuban is hedging his bets on that “live event” future of TV. While he is rebranding his HDNet into ASX TV, a channel that will focus on providing exclusive access to a series of live events and experiences, he is also making a sizeable investment in Condition One, the creators of an immersive video tablet app offering users the ability to control their frame of viewing within a 180-degree radius. The investment in Condition One could very well bring an immersive second-screen environment into the living room, one that creates a unique viewing experience and benefits from providing a social backchannel to connect viewers.

The abundance fueled by digital technologies and their ability to democratize, commoditize and empower discovery, creativity and communication is a major disruptive force. An interesting opportunity rests in the ability of a storyteller to balance this abundance with scarcity. The two are naturally at odds as the traits that make something rare or special often become lost once they scale to larger levels of discovery. In the gaming industry, scarcity and abundance are often utilized through game mechanics that enable players to achieve status, rewards and virtual goods as they “level up.” Music and books can be published as rare collector’s editions at the same time they experience mass adoption via more mainstream releases. But film remains locked within a disposable mindset both in how filmmakers move from one project to the next and the way they bring their work to audiences. This mindset, combined with the lack of “re-playability” of most films, makes the medium especially challenging to innovative distribution approaches.

As storytelling continues to evolve in the new digital paradigm, story stays the same but the telling is what is radically changing. At one time, it was only possible for the studios to build, produce and distribute storyworlds. Their ability to be franchised and serialized was in part due to studios’ large distribution infrastructure and market dominance. But now storytellers themselves can harness the very things that are disrupting the media industry to express the stories they wish to tell. When a large publisher approached me to write a book last year it was not hard to say no. The suggested subject was the evolution of storytelling – a look at the collision of story and technology in the 21st century. Ironically the publisher was unwilling to embrace the 21st century as experiments beyond the print edition of the book were seen as “too progressive.” But I want to thank the publisher, as it sparked an experiment, one that looked at the opportunity that rests within the gap between scarcity and abundance.

I decided to expand the course I teach at Columbia University, Building Storyworlds: The Art, Craft & Biz of Storytelling in 21c, into a book. In the class I discuss the building of storyworlds within a media-saturated environment where the relationship with those formally known as the audience is rapidly changing. Written within the Twitter framework of 140 characters at a time, the book shares insights that I have been gathering during the last 15 years. Intended to provide a look into the process of creating immersive storytelling experiences, the book will only exist in a scarce 140 copies. The limited run is being handmade, making each book a unique version. Placed at the bottom of every page is the phrase, “Set this book free please retweet using #sw21c.” Released under a Creative Commons license, the book will make its way back into the digital world as “tweets,” but only if readers feel they are valuable enough to share by taking the time to retweet them. The ongoing results of the experiment are available at http://buildingstoryworlds.com.

“Storytelling is no longer top down. You don’t need permission nor does your audience. #sw21c”

Over the last few years, I have embraced a rapid prototyping approach to my projects. It is not about waiting for permission or being tied to perfection but rather the continual growth of ideas. The concept is to treat story as software and to use it as a method of R&D (research and development). While writing a book within the limitations of Twitter is a simple exercise, it is informing the design of projects I am developing with my writing partner, Chuck Wendig. For instance, an area of concentration is how the scarcity of smart social objects can become abundant through communication with a wider audience by utilizing social interactions, storytelling and gameplay. (See my column “Listen As Your Story Talks to the Internet” in Filmmaker’s Winter 2012 issue). By releasing a book in only 140 physical copies and encouraging readers to set it free, we’ll see on a small level the behaviors and patterns of how something moves from scarcity to abundance.

Even though these types of storytelling experiments are currently scarce, the hope is that by sharing the results we can make them abundant.  In the end it is about a series of little bets, each one moving you closer to what is hopefully a big collective breakthrough.