“I Try to Be Unbiased and Just”: A Masterclass with A Separation‘s Asghar Farhadi 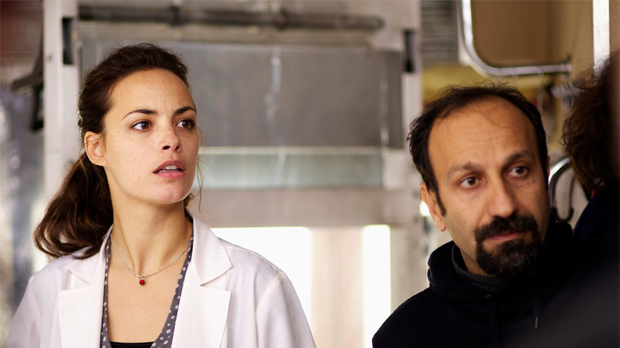 Bérénice Bejo and Asghar Farhadi on the set of The Past

A Separation, Asghar Farhadi, The Past

In 2009, Asghar Farhadi made ripples around the world when About Elly picked up the Silver Bear at Berlinale. However, it was in 2011 that he truly took the world by storm. A Separation, a touching drama about a couple figuring their way out through a messy but amicable divorce, picked up the Golden Bear at Berlin and more than 60 other awards that year, including an Oscar for Best Foreign Language Film. Having offended the conservative authorities back home, though, meant France became the setting of Farhadi’s latest project, The Past. At last month’s 33rd Istanbul Film Festival, the Iranian auteur conducted a lengthy and lively masterclass, talking about his writing process, why a script is like a clothes hanger and how he approaches directing.

“In clichéd stories or movies, the characters are previously defined and you can tell what is going to happen in the end,” Farhadi began. “[In A Separation], you don’t know whose victory is going to make you happier. If the side you like wins, then the other side you also like will be losing. I try to be unbiased and just. The filmmaker shouldn’t impose any thoughts on to the viewers. We are actually letting the viewer decide for himself; this is a common thought I have for all the works I have done. I prefer this style because it brings the audience closer to the film.”

He elaborated on this principle with a highly descriptive analogy: “When I start writing, this process is like a courthouse. For my characters, I constantly ask myself if I gave them a chance to speak in this courthouse. As a judge, was I fair on them? It’s very hard to create this justice between the good or bad. The challenging part of this is I have to do this with the daily activities of the characters. In A Separation, what the characters are doing isn’t very awkward compared to normal people. It’s the regular things and the small, little behaviors; this is why writing is a challenging process.”

Another key element of Farhadi’s movies is the lack of a clear antagonist. The protagonists themselves are hardly unblemished; it’s their flaws and rough edges that initiate much of the conflict. Everyone is viewed in the same light, and no one is undeniably wrong. “I think each character should get a chance to show themselves, display themselves,” Farhadi said. “If we use this method, if we let all the characters in the movie just be, then there won’t be any space or need for negative characters.”

“As I am writing, I’m usually close to one of the characters and I tell myself not to do this. I have to be careful. What is supposed to tell us what is good or bad? Can you tell me this in any form of measurement? In that measurement style, are those metrics the metrics of civilization, religion, conscience? Sometimes, civilization tells us something is wrong but our conscience tells us is right. How do we make this distinction in a fair manner?”

People ask Farhadi repeatedly about how he thinks of the endings to his movies and whether he changes them at all. His explanation is an analogy that’s weird but pitch perfect: “For me, the screenplay is like a clothes hangar. One side is attached to the wall; the other side is also attached to the wall. One end is the beginning; the other is the ending. The scenes of the movie are clothes hanging on this line. And if the end of the line isn’t attached to anything you cannot hang any clothes at all. While I’m writing, I constantly think about the ending of the movie, even when I’m starting.”

When the questions turned to his directorial approach, he came up with another brilliant analogy. “You needed to come to this meeting room today,” Farhadi said. “I want to show you guys coming in and sitting. There could be three situations. One, I could come in and you would come after me. I would watch you take your seats. Second, the camera will be waiting in line with you and will come into the room with you. Third, everyone is in the room. Then the camera will show you all at once. My movies look like the second situation. In the first situation, the director is ahead of the other characters. In the third, he has less knowledge than the characters. But only in the second situation I feel that what the characters know the director knows. What the characters are curious about the director is also. I constantly say to myself that I as a director cannot know more than the characters. This is just like real life. You only come to understand what is going in a room once you enter the room.”

Regarding his film influences, Farhadi said that “I find the Eastern movie scene more influential, especially Japan. Kurosawa’s Rashomon could be listed as one of these. This movie is similar to what I do. An issue has happened and there are many viewpoints on that issue.”

Another guest asked what inspires Farhadi to start writing a script. “When I start writing it is from an image I have in my head,” he answered. “That comes from a memory someone has told me. There was an old man with Alzheimer’s and a young man washing him. And this image kept haunting me. Afterwards, I started asking myself: ‘Why is this young man washing the old one? Why are they alone?’ That thinking led to [A Separation]. Sometimes that image may not even exist in the movie. In About Elly, I had an image [in my head] of a man looking to the sea and waiting for something to come. The man was wet. I kept asking, ‘Why is he wet? Is he looking for something?’ Perhaps his wife was swimming and she drowned. I asked a lot of questions from that image. That is how [About Elly] came to be.”

“I’ll keep question marks in the viewer’s mind when the movie is complete. When the movie ends, you should move away from an emotional viewpoint and turn into someone who thinks about that movie. There are lots of questions thrown around during the movie and you are supposed to answer them. In my movies, the most important one is what would I do if I were in this situation. And that will continue.”

(For more on Farhadi, read my interview with him after the release of The Past.)