Fassbinder and his Friends: Everett Lewis 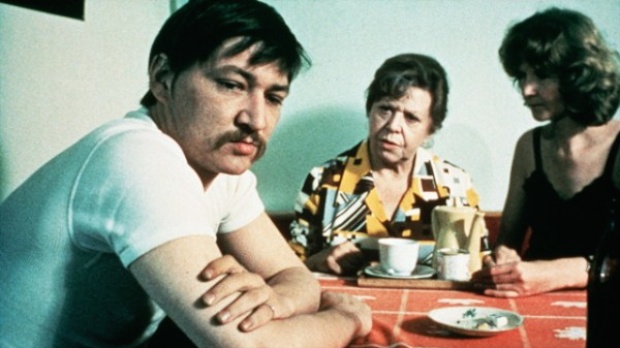 In 1997, the Museum of Modern Art programmed a Fassbinder retrospective, and we asked several directors at the time to write about favorite Fassbinder films. Throughout this weekend we’ll reprint those essays, beginning with, below, Everett Lewis.

The current Fassbinder revival begs several questions. Why did he disappear? Why is he being revived? And what is the underlying value of his revival?

When Fassbinder died, one felt a general sigh of relief; the culture didn’t have to deal with all those films anymore. And a year later he was really gone, wiped clean from cinema. I remember conversations with friends at the time about how gone Fassbinder really was; it was as though he never existed. And frankly, his troublesome modernism seemed old fashioned. We Americans were about to become the “American Independent Filmmakers.” In short, Fassbinder disappeared because something else was about to happen that he may have influenced and even engendered, but to which he was irrelevant. We have to murder our parents; we forgot Fassbinder.

Well, we progressed all right. For a while, say up ’til ’92, there really was an “Independent Movement.” But when studios started buying up the indie distributors, those fledgling studio arms started buying only those films which satisfied studio taste. (I had a representative of one of those distributors say to me, “Yeah, your film might make a couple of million, but we need to make $30 million from a picture now.”) So now, in 1997, when we’re in the American Rococo end phase of the “Independent Movement,” I think we realize what we’ve lost. Fassbinder is being revived because not only is he an antidote to the dreck being passed off as independent, but because more of his defining strengths are “visible” now. Resolutely uninterested in commerciality, Fassbinder was innovative, devoted to “cinema,” hard to take (sometimes hard to watch), endlessly challenging, never complacent, demanding, and so goddamned prolific! Now that there’s nobody like him, we see how rare he was. Because we’ve fallen so far, failed so poorly, Fassbinder shines.

Fassbinder has value as a role model for anyone still interested in a career as an independent filmmaker (if such a thing is possible). His career demonstrates that even the most resolutely personal, erratic, visceral, inconsistent, sexual, intellectual, and iconoclastic visions can and should be pursued. There’s nobody else working with all those cylinders popping now – and that’s why he’s back and why we revere him. — Everett Lewis