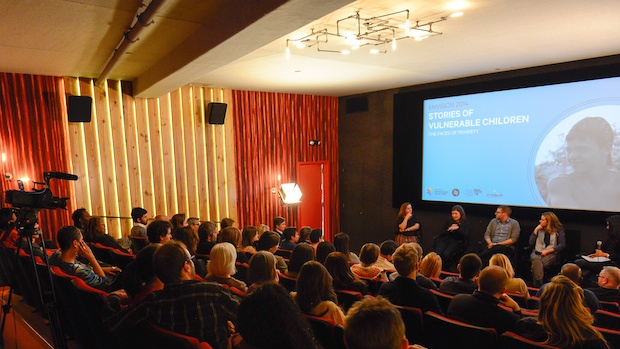 The Made in New York Media Center by IFP.

by Sarah Salovaara
in Filmmaking, Post-Production
on Jun 9, 2014

In addition to the ten projects and filmmakers named 2014 Narrative Lab Fellows this morning, IFP, the parent organization of Filmmaker, also announced that they will offer one-week, theatrical first runs for IFP alumni, members and others at the Made in NY Media Center by IFP.

Since the popularization of self-distribution, many filmmakers have squandered good resources on four-walling for the sake of that New York Times review. IFP’s decision to open up their screening room for submissions (come July) offers filmmakers a built-in curatorial buzz. As noted in the release, IFP will begin the initiative in the fall with the theatrical runs of three IFP Narrative Lab Alumni and will assist filmmakers with “comprehensive audience engagement and grassroots outreach strategies, assist with publicity, and offer a revenue split to all participating filmmakers.”

In the near future, survivors of a global epidemic are plagued by a debilitating symptom of the disease – double amnesia. Claire Carré (Writer, Director, Producer, Editor), Charles Spano (Writer, Producer).

Out of My Hand

Soon after a young man moves to rural Virginia, he finds that life in Appalachia can be more savage than the world he left behind. Fellows: Cameron Nelson (Writer, Director, Producer, Editor), Courtney Ware (Producer).

Songs My Brothers Taught Me

Songs My Brothers Taught Me explores the unique world of South Dakota’s Pine Ridge Indian Reservation through the eyes of Jashaun, a young spirited Lakota girl, whose faith in her family and community is tested when her brother Johnny threatens to leave the only place they’ve ever known. Chloé Zhao (Writer, Director, Producer), Mollye Asher (Producer), Umar Riaz (Editor).

A teenager’s plan to come out at his family reunion gets derailed when a bloodstain on his cousin’s dress makes him the suspect of abuse. Fellows: Matt Sobel (Writer, Director, Producer).