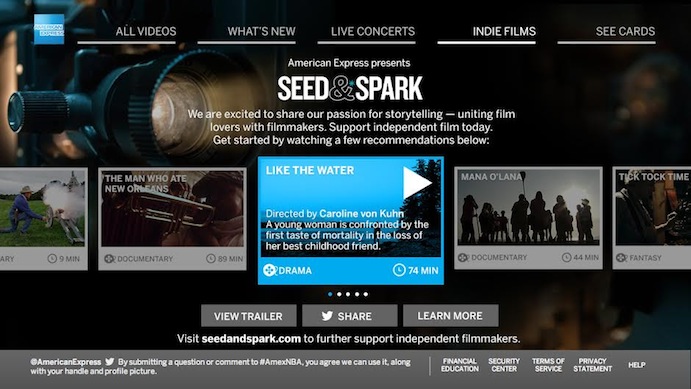 by Sarah Salovaara
in Distribution, Filmmaking
on Jun 11, 2014

On Monday, it was announced that the crowdfunding and streaming platform Seed&Spark would partner with American Express’ AmEx NOW distribution service in an effort to bring their titles to an audience of 67 million households. AmEx will select five films a month (both shorts and features) from Seed&Spark’s library to screen on their interactive TV channel, AmEx NOW. The first crop of films includes features Like The Water, The Man Who Ate New Orleans, Mana’olana: Paddle for Hope, and shorts Tick Tock Time Emporium and Lex. Filmmaker spoke to Seed&Spark’s Director of Content, Amanda Trokan, about the details of the new initiative and the open submissions process.

Filmmaker: In collaborating with American Express, you’re able to bring your films to an entirely new audience. What do you think is the curatorial overlap?

Amanda Trokan: American Express is certainly bringing our films to a much wider audience! There is no “typical Seed&Spark audience member” that we have in mind when we select films for S&S; rather, we program slates of films for a variety of niche audiences. While American Express has a thorough understanding of their membership, this is such a new program that it’s really all a very exciting experiment where we will learn together what Amex NOW audiences are after.

Filmmaker: Are you accepting films for consideration that were not previously crowdfunded through Seed&Spark or featured on the streaming portion?

Trokan: We always accept films directly from filmmakers for our streaming platform a.k.a. the Seed&Spark “Cinema”–they need not have crowdfunded with us. All a filmmaker needs to do to be considered for programming on our platform is to go to our website and submit their film (of any length or genre) for free. But yes, it must be a Seed&Spark Cinema film for it to be eligible for the Amex treatment!

Trokan: The filmmakers are paid a license fee for the term.

Filmmaker: Short films have rougher waters to navigate in terms of offline visibility and distribution prospects. How will AmEx present them? Programs or stand alones?

Trokan: Every month, five films will be featured on the “Indies” section of Amex NOW: two features and three shorts. Some months you might find that there are common themes, such as music or community, which will encompass the shorts and features alike.