“In Prison, I Had Some Peace of Mind”: Jafar Panahi on Closed Curtain 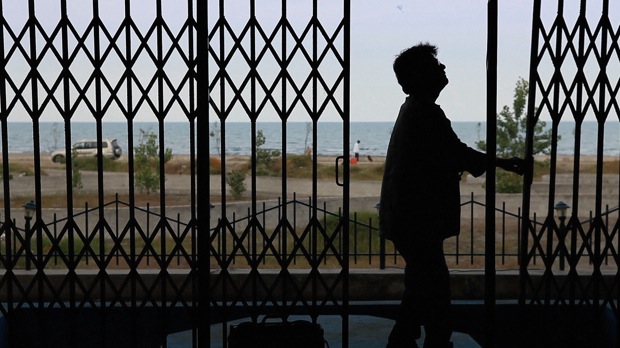 by Vadim Rizov
in Directors, Interviews
on Jul 9, 2014

Dogs have been banned as pets in Iran, providing the starting premise for Jafar Panahi’s Closed Curtain. A screenwriter (Kambozia Partovi, also the co-director) has a dog smuggled into his seaside villa by friends. Once the animal’s inside, the man systematically draws the curtains over windows on all three floors. The opening of Jafar Panahi’s Closed Curtain fictionalizes the necessary circumstances of its production: working in secret, the director was forced to draw the curtains for as much of the shoot as possible to make sure no one could see what was going on inside. There are echoes of recent scenes in Tsai Ming-liang’s Face and Ursula Maier’s Home — both films whose subjects methodically use tape to black out windows, an action meant to seal out a presumably threatening world. Here, the self-imposed isolation has a different intent: in order for an indoor theater to flourish, curtains reluctantly have to be drawn to keep the outside world outside, and the audience (along with the camera, which can’t go beyond the porch) is trapped in the theater along with the players.

The screenwriter’s trying to keep the dog’s presence secret from the police, an inexact parallel with Panahi’s production. The animal (named “Boy”) sits and watches TV, which pours out images of bloody dying dogs assaulted by the police. Does Boy understand what he’s seeing or comprehend the greater threats to his existence? Humans can know they’re restricted, while the dog remains innocently oblivious; consciousness, in this context, is a curse. Already on edge, the screenwriter’s equilibrium is further disrupted by the unexplained arrival of Melika (Marayam Moqadam) and Reza (Hadi Saeedi), a sister and brother seeking shelter from the police. Reza departs, but his sibling remains, annoying the screenwriter, who claims he just doesn’t “want any trouble” (this in the middle of a completely illegal production, one of many meta-tricky ironies). Melika’s a stubborn reminder of another type of prisoner: Iranian women, whose actions, conduct, public and private presence are all heavily regulated by the government, which is the subject of Panahi’s The Circle and Offside. (The screenwriter gets to leave the house at film’s end, but the woman remains locked inside; enough said.)

Panahi himself arrives later, though his relationship to the screenwriter is unclear: is the latter a product of the former’s imagination? Are they aware of their side-by-side presences? Who’s the specter and what’s real? Closed Curtain repeatedly worries and rearranges these relationships and ambiguities. It’s both dazzling and suffocating: as it becomes clear that what’s going on could be infinitely/indefinitely tweaked, it’s hard not to want Panahi to wrap it up and settle on a takeaway.

For all its frustrations, Closed Curtain’s still a new film from one of the world’s great directors, still under house arrest and forbidden from making movies. As in The Circle and Crimson Gold, the film is neatly bookended, opening and closing with a variation of the same shot, and the overall structure so intricate it’s nearly palindromic. Once Panahi was an urbanist, doing for Tehran’s streets roughly what Don Siegel did for San Francisco in Dirty Harry: shooting from afar or up close, soaking in the metropolitan bustle, making for lively and absorbing images counterbalancing grim subject matter. Now he’s trapped inside, and the suffocation and lack of options is palpable in the increasingly nervous film. A gallery of posters, including ones for his past movies, are concealed under drapes: when those are pulled down, the largely non-Iranian lettering remind us this isn’t the first time Panahi’s work has been banned at home and easier to see abroad.

I tried to stay bloodless and focused on the art, to the extent that it can be divorced from the circumstances surrounding it, and I failed. A question about whether Panahi likes the properties of his current digital practices led back to frustration over his life, which is understandable. That Panahi’s conducting standard-duty promotional activities for an illegal film while under house arrest is kind of incredible in and of itself. His interviews should be read in bulk (especially this one), as part of one long update about how Panahi’s doing.

Filmmaker: Before we talk about your new film, I’d like to ask about the DVD collection that can be seen in This Is Not A Film, which includes a lot of new Hollywood movies I wouldn’t expect you to seek out. Are these sent to you?

Panahi: Most of these are smuggled into the country and brought to people’s houses through some people whose job is to distribute these illegal DVDs. Sometimes they bring my own movies to my house to buy copies from them. I should add that every major Hollywood movie is downloaded by people.

Filmmaker: How did you conceive the tricky structure?

Panahi: What you see in my movie is born of the circumstances that I live under, and also reflects how unsettled my frame of mind is. When I was writing the script, I wasn’t feeling good at all. I was quite depressed, and that’s why I went to the villa on the sea coast. When I was there, I was feeling better, but it was still in the back of my mind. I had difficulty sometimes distinguishing between what was real and what was not, and that seeped into the movie. I sometimes feel I’m still under the same circumstances. It’s difficult not to have any notion of what your future is going to look like.

In prison, I had some peace of mind because I couldn’t do anything. I was limited to the confines of the prison, but when you’re out and you’re not allowed to work, it’s like you’re in a larger prison. Different conditions and situations, but you still feel that you’re imprisoned because of your inability to work. For a long time, I was part of society and could make socially committed and realistic movies, but now I feel isolated and can’t work the way I used to work. So I resorted to my imagination and whatever happened, it just happens in my imagination. I find it difficult to film anything that I think of, because I’m not allowed to make movies.

This is the world that they have created for me. I feel sometimes I’m the prisoner of my own thoughts. It’s difficult to live in this large prison. It’s like a hell in which everything seems to be internalized. I’m being forced to internalize everything, and nothing can really manifest itself the way it used to.

Filmmaker: In your earlier work, there were a lot of street scenes filmed from a distance, with lots of depth and urban hustle. How did you plans your shots when adapting to shooting in a house without those options?

Panahi: Working outside is what I was used to. When you go inside, you feel so limited. In our case, we couldn’t even look out the window because of security. We had to pull the curtains over the window so nobody could see what we were doing inside. This is a space without a lot of depth, unlike the spaces I was using in my previous movies, and therefore the emphasis is on people rather than locations. People seem to have a larger share of the narrative. Working inside also affects the way you light any given scene, because of the closing down of the diaphragm and working with a shorter focus, which is again quite different from the way I used to work. In my previous films, if you noticed, I don’t even have a shot reflecting somebody’s imagination, nothing that was less than realistic. When you get to a situation like I was forced to in my last two movies, you have to follow different rules. If I had my choice, I’d love to work with exteriors and even outside of the country, as there were negotiations for that going on when I was arrested. I’d been approached to make an adaptation of Khaled Hosseini’s A Thousand Splendid Suns.

Filmmaker: How did you conceive the part of a screenwriter who shelters “impure dogs”? It parallels your case, but not exactly.

Panahi: Keeping dogs as pets is illegal in Iran, especially walking them on the streets or having them ride in your car. The police can arrest you for doing something like that. People are resisting this law because they think it’s unjust and they’re resisting it. A lot of people keep dogs in their homes. There’s even a place in Tehran where people gather and sell and buy dogs, which is quite illegal but people still do it. There have been a lot of instances where the police show violence in grabbing dogs, even killing them in front of their owners.

Filmmaker: What do the posters on the wall signify for you when thinking about your past body of work?

Panahi: Most of those posters are for my own movies, but I saw the majority of the rest of them when I was a student. Obviously they affected me, but the one movie that affected me more than any other film was The Bicycle Thieves by Vittorio De Sica.

Filmmaker: Have you had any new contact with the government regarding your ability to make films legally again?

Panahi: No, unfortunately nothing new. Of course, I’ve never contacted the government people, but several of my friends have attempted to contact them and see if they can bring this matter to some kind of resolution. That was without my knowledge. I didn’t ask them to intervene, they did it on their own. Later, they told me that they couldn’t get anywhere. Unfortunately, though there may be some new people in the offices, it’s the same old methods. They’re showing a lot of resistance not just to me, but a lot of other filmmakers they may not like, including most recently a documentary filmmaker, Mahnaz Mohammadi.