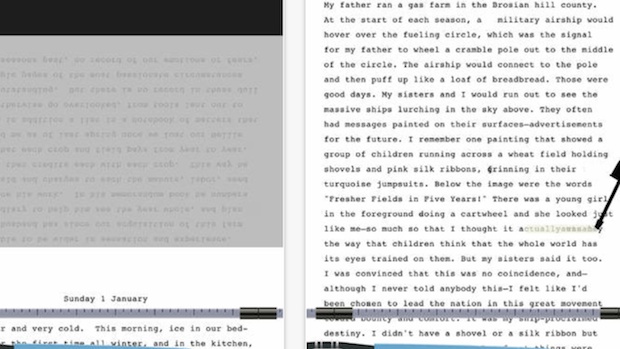 I grew up on a manual typewriter, the same one my mom used to write articles for Life Magazine in the ’50s and ’60s. It was a small portable in a beat-up canvas case, and you had to hit the keys hard. Later, my dad outfitted his basement home office with an IBM Selectric. I loved that typewriter. It was a brick, a giant slab of molded something, and once you gave the keys a little push the thing would explode. The violence of it was kind of thrilling.

Still, I don’t fetishize old-school typewriters, manual or electric. I can’t imagine going back to one. The cut-and-paste rearranging of word processing is closer to how my brain works. In fact, by moving over to Scrivener for all my long-form writing, I’ve gotten further away from the linear separate-drafts style mandated by the manual typewriter.

Nonetheless, I like this new project, Typing Writer, from The Rumpus. It turns your iPad into a manual typewriter of sorts. As the app’s introduction explains:

Typing Writer is about getting words on the page…. It works just like your old typewriter. When you type over something you still see the original letter underneath. When you reach the end of a line, if you don’t manually go to the next line, the typewriter will go to the next line for you, even in the middle of a word! Press your finger on the page and a white-out brush appears. Brush over a letter or a word. There will still be a white splotch, of course. That’s how white-out works!

Typewriter sounds are included, but you can turn them off if you prefer. But using the Typing Writer I realized I liked leaving them on, just to hear the bell letting you know you’re coming to the end of a line. After you’ve typed your draft it’s easy to export and open in any word-processing software.

The Rumpus teamed up with Ying, Horowitz and Quinn (the folks behind The Silent History, covered at Filmmaker here) to create the app. But as The Rumpus’s Stephen Elliot writes, it wasn’t created for nostalgia reasons. In addition to being fun, it is actually intended as a productivity tool by cutting down on endless line-by-line finessing or structural reshifting and just forcing the completion of a first draft:

I was having a drink with Alex Mar at some bar below the sidewalk in the East Village. She was working on a collection and one of us brought up the typewriter for some reason. We were both old enough to have done significant writing on a typewriter and we felt we were more productive on a typewriter because we had to keep moving forward. We missed that. If we made a mistake, we kept typing. If we wanted to rearrange the information, we had to start over. With the word processor we’ve lost some of the immediacy. It’s too easy to delete, to cut and paste. Sometimes that means we get bogged down when the key to finishing is so often to just keep going.

If it sounds like Typing Writer will be useful or just fun for you, buy it at the App Store. It’s only $1.99. And even if you don’t think it’s the way to lay words down on the page, you might want to pick it up anyway. That’s because it comes with first-drafts by a number of great writers: Jim Shepard, Melissa Febos, Amy Brill, Tao Lin, Rick Moody, Eli Horowitz, and Elliott himself. I haven’t picked up the app yet, but I will. I’m presuming at least some of those first drafts are rough enough to inspire me — and all you — to finish what we’ve got lying on a hard drives.