At a Test Screening 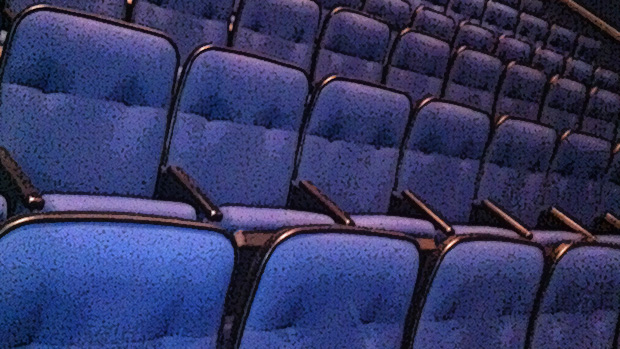 by Michael Murie
in Filmmaking, Post-Production
on Aug 4, 2014

It’s hard showing your movie to other people for the first time. You put your heart and soul into it to the point that you either run out of ideas, money, energy, or all three, and you finally have to show it to people. You play it, seeing all the things you’re still not quite happy with, and then you have to listen to them point out all problems you already know are there.

You have to have a thick skin, or an ability to just keep on going, to keep doing this.

I attended a feedback screening of a short film last week. The film is being produced on a very low budget, and is currently just under 50 minutes in length. While they don’t have a big budget, they do have some connections and managed to secure a theater at a local college for the screening. That meant a huge screen, modern – and high quality – digital projector, and good comfortable seats. However, being between terms, it also meant that a problem with the switcher in the control room hadn’t been fixed and there was a noticeable hum through the speakers.

A hasty trip to procure cables that might solve the problem came up empty, so after a 20 minute delay, and advice to sit back from the screen as the hum was less noticeable there, they got the screening underway.

The director and producer talked a bit about where they were in the process and what they were looking for. The movie had been shown — and several in the audience had already seen it — some months before. Since then they’d made some editing changes, color corrected it and added music. They said that they were particularly interested in technical issues at this session – i.e. difficult to hear audio – though they added that they were still interested in comments about the story. I don’t think they were really expecting to get a lot.

Before the movie started they did not provide a synopsis of any kind. They were even asked by someone at the beginning for one, and they preceded to debate whether they were going to provide some sort of description, with the audience also offering advice whether to do so or not! I think the desire was to make the test as “blind” as possible. 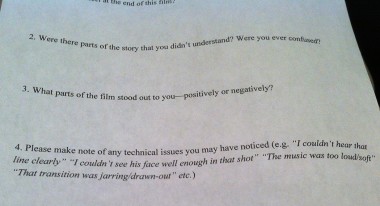 I think that was a mistake. The reality is that 90% of the time people go into a movie with some sort of expectation, whether it’s from seeing a trailer, a poster or reading something about it online. You at least know the genre, and there is a huge mental jump from a romantic comedy to a psychological thriller. You don’t have to tell the whole story but maybe a short one-line description would help get people in the right frame of mind.

They said that they planned to show the movie once, then show it a second time — I think with the lights up — so we could note down specific times where we saw problems. They even gave us a page to fill out and provided pens. But because of the hum problem — which, though noticeable, wasn’t so loud that it made watching the movie impossible — they ended up abandoning the repeat screening idea, instead soliciting feedback directly from the audience after the first showing.

The one problem I had during the screening was that it was so dark I couldn’t see to write anything on the piece of paper, and the one time I did try and write in the dark I managed to write with the pen upside down! Afterwards, I couldn’t make out what I had written from the indents on the page!

But still we had comments. The first person said they could see it had made a big advance from the previous screening. Someone else said the pacing was really good. There were some comments about the darkness of the image in places. Then someone said that the first part of the movie dragged and needed to be tightened up. Several others joined in to agree, suggesting that one scene should be cut down quite a bit.

There were comments about a visual effect used on one scene that most people felt was either too strong or shouldn’t have been used at all. There were also comments about specific editing issues. There were some comments about the music, the acting and the color grading, but the vast majority were about the editing and presentation of the story rather than about technical issues.

I can’t tell whether soliciting comments rather than having people write them on a piece paper produced more or less comments. It certainly resulted in a lot of discussion about issues; one person would say something and others would add to it.

There was one important difference about this audience. This wasn’t a random audience of average theatergoers; most of them were local filmmakers, and several were even involved in the making of the movie. Polling a regular audience would have probably resulted in reactions to what they saw, but many fewer specific comments about how to fix it.

Should you show your movie to test audiences? Of course. Should you listen to what they say? Usually, when someone says something negative about your baby your first reaction is to dismiss it. And if you can, without a second thought, then you should ignore it. But a lot of the time you know inside that the criticism is valid. Either way, you have to have a thick skin to be a filmmaker.