“I Am Here to Declare the Word ‘Documentarian’ Dead”: Michael Moore’s Documentary Commandments 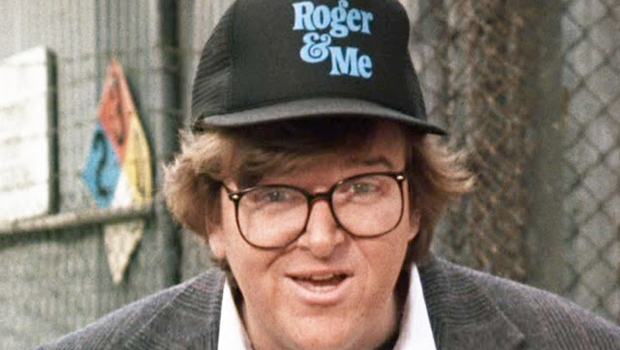 From the Roger and Me trailer

Michael Moore loves TIFF and this week he paid the festival back with a series of events and screenings, including the 25th anniversary presentation of Roger & Me and a keynote speech at the Doc Conference.

The love affair began in 1989 when Roger & Me — about first-time filmmaker Moore chasing Ford Motors CEO Roger Smith to talk about layoffs that devastated his hometown of Flint, Michigan — captured the audience award and launched the film. Thom Powers, TIFF’s international documentary programmer, described the movie at the Monday night screening (to showcase the new digital restoration) as a “linchpin film in modern documentary-making.”

The Sundance Now Doc Club feted Moore at a jam-packed luncheon where the line outside stretched around the block under the burning late summer sun. Earlier that day, Powers noted that before Roger & Me, only nine docs grossed over $1 million, but after Roger over 100 docs have struck that plateau. In a touching moment, Moore and Detroit native Powers teared up when they professed survivor’s guilt for leaving Michigan and thriving outside the embattled Motor City. Moore then lampooned Toronto’s buffoon mayor, Rob Ford: “Like any good joke there’s a point where you have to end the joke!”

He finished by praising DIY documentarians such as Emad Burnat of Five Broken Cameras. “He was a Palestinian farmer. No film school. No school. Nothing,” said Moore. “Just had a digital camera, something we might have used 15 years ago…It was made by somebody who wasn’t a quote ‘filmmaker.’ It gave me such hope.” Being a documentarian, stated Moore, is not holding a film degree or having the RED camera: “It’s being a citizen. He was a citizen of his country trying to do good, and he respected the art form.”

On Tuesday morning, Moore elaborated on his thinking by presenting a documentarian’s manifesto. The highlights:

Don’t make a documentary; make a movie. “I am here today to declare the word ‘documentarian’ dead. We are filmmakers. Scorsese does not call himself ‘fictionatarian.’ Put the art first; the politics are secondary.” In other words, make a movie that people want to see, or else “nobody is going to hear a damn word about my politics.”

Show them something they’ve never seen. “Don’t tell me that nuclear power is bad. I know it’s bad. I’m not going to give up two hours of my life to have you tell me it’s bad.” Don’t worry about the dumb people, but focus on the smarter majority, the ones who “are going to make change happen anyway…Take them someplace they haven’t been.”

Stop the college lecture which is what today’s documentary has turned into. “I always hated school. It was nothing but regurgitation back to the teacher of something the teacher said, and then I have to remember it and write it back down on a piece of paper.” Modern docs have turned into school, a model we have to break.

Docs taste like medicine. “Remember, people want to go home and have sex after this movie.” Moore added: “I’m not saying you can’t present them with a serious subject. I’m just asking that that you do it in a way that makes them feel full of energy and passion and aroused. Politically, I mean.”

The left is boring. “The Left was funny in the ’60s, and then we got really too damn serious.”

Go after the real villains. “Why aren’t you naming names?” Moore explained that he sits on the Oscar jury to pick the best doc. “There are only two or three docs where the subject matter is about something in the present, something in the US, and something that is political. People say, ‘but I’ll get sued’ [if I name names]. Yes, you’ll get sued!”

Make your films personal. “You don’t necessarily have to go in front of the camera, but people want to hear the voice [behind the film],” such as with Morgan Spurlock and Al Gore. “You know when you see a Scorsese film who is saying it.”

Point your cameras at the cameras. “Show the people why the mainstream media isn’t telling them what is going on.” Moore cited the moment in his Bowling for Columbine” at the funeral of a six-year-old where “he’s trying to fix his hair out in front of the funeral home and he’s yelling at the producer through the earpiece, and all of a sudden he realizes he’s going live and, bam — it’s showtime! It really shows you how little they truly care, and how little REAL information you’re getting about the issue.”

Make docs in the spirit of Stewart and Colbert. “The American public loves nonfiction storytelling, but you’d never know that by looking at the list of movies playing down at the multiplex.” Roaring to the audience, Moore pointed to the amount of non-fiction books reviewed every week in The New York Times or the ratings of nonfiction TV shows: “People love to watch Stewart and Colbert. Why don’t you make films that come from that same spirit? Why wouldn’t you want the same huge audience they have?”

Film only those who disagree with you. “I have always found it much more interesting to try to talk to those in charge…This country, this world, exists for the people, and not the few rich folks who run it. And those rich people in power have some ‘splainin’ to do.”

While filming a scene, are you getting mad? Are you crying? “You are the audience. That’s how the audience will react too. The audience is a crew member on the film.”

Less is more: “Edit. Cut. Less words. Less scenes. People get it. People love that you trust them.”

Sound is more important than picture: “Pay your sound man/woman the same [rate] as what you pay your DP. Sound carries the story.”