“We’re Doing All the President’s Men, and Then We’re Doing The Parallax View“: Michael Cuesta on Kill the Messenger 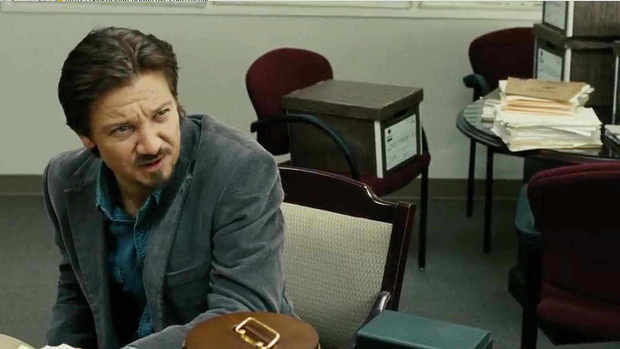 Jeremy Renner in Kill the Messenger

by Scott Macaulay
in Directors, Interviews
on Oct 15, 2014

Although it is a ’90s-set story dealing with an ‘80s political cover-up, Michael Cuesta’s Kill the Messenger, the true story of journalist Gary Webb, couldn’t be more of the moment. When filmmaker Laura Poitras is documenting the work of a new breed of crusading journalists, it’s enlightening to revisit the work of a writer like Webb and to remember the opposition he faced from not only the U.S. government but his fellow scribes in the mainstream press.

In Kill the Messenger, Jeremy Renner delivers a quietly gripping turn as the San Jose Mercury News reporter who comes across information revealing that the CIA ran drugs into South Central Los Angeles as a way to launder funds to the Nicaraguan contras. It’s an explosive story, with Webb’s reporting turning him, briefly, into a media sensation who showed up the leading institutions of the Fourth Estate: the New York Times and Washington Post. But as Webb tries to continue his reporting, his colleagues’ knives come out, a process Kill the Messenger traces without sentimentality, which doesn’t mean that it isn’t heartbreaking all the same.

Director Michael Cuesta arrived on the scene with his controversial 2001 drama L.I.E.. Starring Brian Cox and Paul Dano, it detailed the sexually-charged relationship between an older man and teenage boy. Several other independent films, including 12 and Holding, followed along with a successful career as a television director. (Cuesta directed the pilot and first two seasons of Homeland, the pilot and episodes of Dexter, and episodes of True Blood and Six Feet Under.)

Opening last weekend, Kill the Messenger, with its human scale, political content and nuanced, character-based approach, is in danger of being overlooked amidst the more heavily-promoted Fall films. That’s a shame. I’ve seen quite a few of those Fall films, and weeks after I saw Kill the Messenger its confident, intelligent storytelling and Renner’s affecting performance have lingered with me.

I spoke with Cuesta about ‘70s movies, whether modesty is a virtue in today’s filmmaking world and what he tried to protect while making this film.

Filmmaker: Critics are always talking about the qualities of ‘70s movies, and your film had those qualities to me. It feels tonally different than the political thrillers of today. There’s a modesty to it that I appreciated. The drama is not amped up in an artificial way. When you were directing this film, what were the qualities you wanted it to have?

Cuesta: “Modest” — I haven’t heard that before but I’ll take it as a compliment. Look, I saw the film as Gary would have seen his story. [In the first half], there is an optimism, a life to it. Gary is a rock star. The first half of the movie is a procedural. It’s not that dissimilar to Alan Pakula’s All the President’s Men. I told my D.P., Sean Bobbitt, “We’re doing All the President’s Men and then we’re doing The Parallax View.” So, it’s an homage to Pakula for sure — and Pakula died on the L.I.E., which I mention in my first film [L.I.E.] There’s a bit of a swagger, a cockiness to Gary until he goes out from his home and he’s in these more exotic environments like Nicaragua or D.C., and then we start to see that this story is way bigger than him.

Tonally, I wanted to have things begin to turn on him and to use paranoia as an indicator that Gary is worried, that there’s self doubt. In the first half of the movie there’s not a lot of self doubt. So I just did that [paranoia] very subtly. That follow in the parking garage scene — that could have been two guys watching Gary from a car. There were [versions of the script] like that. I said, “No, it should just be [Gary] thinking about [being followed].” How do you articulate that visually? You get a guy who’s maybe checking out his ass, a guy who is following him and looks like a CIA guy because he’s got grey hair. So there’s ambiguity. The modesty comes from that — being ambiguous, being subtle, building it slower and trusting the audience not to get bored. And then, as the turning point happens, as Gary goes on the defensive, the tone of the film shifts, and it becomes about how [the situation] is affecting him. You get more how it affects his personal life, the sacrifice he begins to pay, and the Parallax View idea of the isolation that happens. The camera starts to get very still, and I start to play the spaces a little more — a little wider, not handheld. Those were conversations I had with Bobbitt, and we stuck as close to that [approach] as possible. It just felt honest.

Filmmaker: At what stage did you get involved in this film?

Cuesta: I came on later. Jeremy was already attached, and he and I had worked together before. I believe, because he is a producer, that the reason why I made this film is because he said, “I want him, I trust him with my performance.” He and I have a very similar sensibility — like you said, a modesty. We always were at war with cliche when we were rehearsing and doing pre-work with the script.

Filmmaker: What cliches were you at war with?

Cuesta: What I just said. The guys watching. Why are we letting the cat out of the bag so soon as far as putting the bomb under the table? I think the “bomb under the table” was when the phone rang and it was Coral Baca [the character played by Paz Vega} — that’s all you needed, a subtle thing like that. Believe me, I had people wanting to put things in the very beginning to show “there is danger lurking.” I like a slower build, and I think [Jeremy and I were] simpatico in that way. I think he appreciated my direction of him not always telegraphing what’s going on — being very modest (laughs) or subtle.

Filmmaker: Did you have a prior interest in the story itself before reading Peter Landesman’s script?

Cuesta: I remembered the story when I read the script, and I remembered seeing the real Webb on the circuit, and the story itself breaking. I think the thing that was really important to get out there [in Kill the Messenger] is Gary’s discrediting by his own kind. He never thought his bliss was so misguided, you know what I mean? The thing he believed and thought would protect him was what ultimately betrayed him.

Filmmaker: The press and its freedoms.

Cuesta: Which was his own people.

Filmmaker: You have a very successful career as a television director, directing shows like Homeland. What do you look for when you decide to take on a movie?

Cuesta: A story worth spending two years of my life. Right now, I’m lucky because I don’t need to make the money off the movies. I”m making a living in TV; it’s paying enough. I’ve had much more success, in terms of how Hollywood sees it, in that business rather than movies, because all my movies are small movies. And they are two years of your life. My wife always says, you seem to have the most successful films when you really inhabit your character, when you understand them on a level that is you. And Gary was that.

Filmmaker: In what way?

Cuesta: Well, I didn’t really figure it out until I talked to his wife, but it was his doggedness, his passion. He doesn’t take no for an answer. His believe in something that has merit. That and being a little bit of an outsider. Gary saw himself as a little bit of a dissident voice. I related to that. I think all people who come out of independent film do. My first film, L.I.E. — the shit I went through for making that movie. People attacked me, said, “Are you trying to put pedophilia in a good light?” What? I didn’t even get that. Darkness, things that are complicated — I don’t understand why they’re dark. Maybe it’s a block I have, but I always find difficult stories healing — somehow redemptive, in a way. That’s why the movies have to be like that. There’s one film that’s not that I try to forget. I tried a more commercial film and it did not work.

Filmmaker: What other insights did you get from Gary’s wife?

Cuesta: She told me that Gary was not an easy person to live with, and this is something that I related to. That he always had one foot out the door. He was the kind of guy who likes to be in a room by himself, in his office, to close that door and have his own space, but to make sure the kids are right outside the door, to know that they’re there. It’s a little bit of a selfishness, like, “I need you around but I don’t really want to be with you right now.”

Filmmaker: As a director of a film you didn’t develop and that you came onto later in the process, what did you feel you had to protect in this material?

Cuesta: To not make this movie just an indictment of the CIA. I really didn’t want to do that. I wanted to come from Gary’s POV, to tell the story of a journalism who needed to keep going and was stopped because he poked the hornet’s nest. The great tragedy is that he didn’t get the whole story out because he was shut down. So, I would say protecting Gary’s POV and not to use thriller tropes in a heavy way, to do it for the sake of action or because “the audience needs this.” You used the word modesty, [laughs], and subtlety is something I really fought for. I didn’t win every battle, in my opinion.

The other thing was Gary’s suicide. There were people who wanted to work with that, to play it as conspiracy, and I didn’t want to because I believe he killed himself. It was six years later, and it’s what the family believes. He sent letters to all of them. He planned it. I felt it was important in terms of the family not to use that as a selling device for the film, not to make it the “who killed Gary Webb?” story.