“A Zinging Mix of Naturalism and Edge”: Jessica Oreck’s The Vanquishing of the Witch Baba Yaga 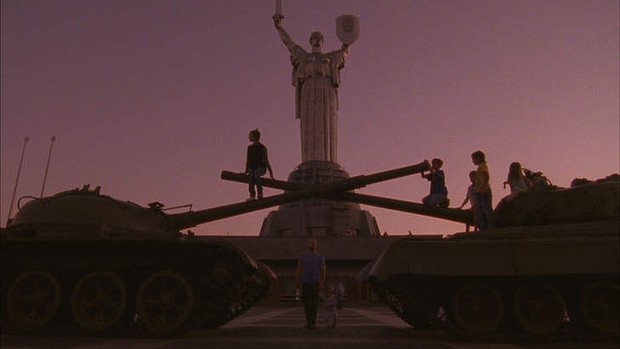 Jessica Oreck, The Vanquishing of the Witch Baba Yaga

With Jessica Oreck’s The Vanquishing of the Witch Baba Yaga opening today at MoMA in New York for a week-long run, we are rerunning Howard Feinstein’s review from the New Directors New Films festival.

Running the length of this labor-intensive doc about man’s late-developing historical estrangement from nature are excellent hand-painted animated panels depicting a composite Slavic fairy tale about displaced tween siblings Ivan and Alona who have, out of desperation, taken refuge in a forest they had learned to fear as small children.

Residing there is the evil witch Baba Yaga, whose house is built on chicken legs and who eats children. After she captures Ivan and Alona and gives them three impossible tasks, the punishment for not finishing them being roasted for her dinner, they outwit her and overcome their fear, just in time to gain their freedom and bring in to the now-sanctified woods the victims of evil soldiers preying upon their village.

Bloody warfare and ethnic conflict in the 20th century necessitated a revaluation of the myth. The animated tale illustrates the process of subduing the ingrained phobia, so that people could take refuge in the woods.

Sections of the fairy tale are cross cut with contemporary shots filmed in five Eastern European countries by d.p. Sean Price Williams that bear some visual or functional relationship. Most are impressionistic and fast-moving scenes from nature, traditional villages, or restless cities. Among the other media and techniques Oreck uses are contemporary 16mm and archival footage, heady voiceover, and an eclectic music track that includes abstract melodies and regional folk songs. The Vanquishing is a zinging mix of naturalism and edge.

The film is about much more than a fairy tale about Baba Yaga. The narrator explains how memory enables fairy tales to develop, to become stories retold. In the same way, we internalize customs and rituals that have changed over time. We become afraid of whatever is outside our comfort zone. We construct unfriendly protective barriers like fences and bunkers. The narrator makes accessible a lot of complex information, such as how man became detached from the land, and how he abandoned the cycles of nature in favor of hammering time flat. It’s deep, and deeply beautiful.