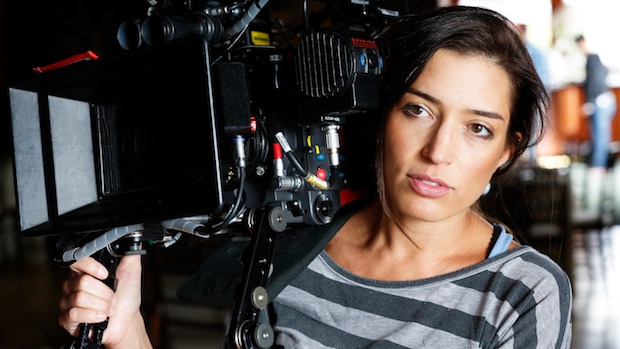 by Reed Morano
in Cinematography, Filmmaking
on Oct 28, 2014

“Stop motion interpolation!” is the call on a Change.org petition urging TV manufacturers to disable the default “smooth motion” setting on new televisions. As the petition explains, “Motion Interpolation was an effect that was created to reduce motion blur on HDTVs but a very unfortunate side effect of using this function is that is takes something shot at 24 fps or shot on film and makes it look like it was shot on video at 60i. In short, it takes the cinematic look out of any image and makes it look like soap opera shot on a cheap video camera.” Below, in a guest editorial, cinematographer Reed Morano (Frozen River, The Skeleton Twins, Shut Up and Play the Hits) explains why this issue should be important to all film lovers. — SM

This issue is really important to me because even though it’s a visual issue — it affects my narrative experience as a viewer because it’s so distracting. I don’t know if it’s just that I “know too much,” but I can see the difference right away when “smooth motion” is on a TV: it turns me off. It cheapens the look of anything shot at 24fps.

With that in mind, I can’t enjoy any film or TV show when that setting is on. It feels too real. I know it’s not the look the filmmaker intended. Add to that, I’m a filmmaker and a cinematographer.

If you took a photocopy of a painting and hung it up in a museum, trying to pass it off as a real painting, it would look cheap and lack texture. That’s what motion interpolation does to the moving image.

I remember the first time I saw my work affected by motion interpolation. A friend of mine had gotten a new HDTV and he called me in to the living room, he was watching my film on DVD, Frozen River. Well, I was shocked to see the film on the TV when I came in the room — the 24 fps effect had been totally wiped out, and it looked like I was watching an episode of “General Hospital.”

It was so disheartening to see that cinematic look I had put everything into completely eradicated — all my work ruined by the default setting of a television manufacturer. Ever since then, I’ve made it my mission to turn this feature off every TV I see. It’s not fair to the artist or the viewer.

One time I tried to watch One Flew Over the Cuckoos Nest at Catherine Keener’s house with her and her son and it was like, “what the fuck am I even watching? Is this a Lifetime movie from 1990?” I stopped the movie and sat there for ten minutes going into her TV’s menus trying to fix it, which I eventually did. It just needs to be much easier than that because only a very small portion of the population is that anal and has that kind of patience. Even worse, there was the time a few years back, before I got into the guild, when I was at another ASC D.P.’s house showing him my reel. We put the reel on his TV and everything that was 35mm on the reel looked like video. He had smooth motion on his TV and didn’t even realize.

People often tell me it’s a lost cause to try and change this feature and that the average viewer cannot tell the difference. But I’ve asked everyone I know, and, since starting this petition, I’ve realized that many more people outside of the film industry are disgusted by this default setting and simply had no idea how to change it or had no idea that they could change it.

The bottom line is by allowing it to exist as a default, we are basically throwing away our freedom of artistic expression as filmmakers because someone else is deciding that our work will be seen completely differently in the end. And we have no choice about it. Frankly, I’d rather there at least be an option and let the viewer decide if they want “Sports Look” or “Cinema Look.” I guarantee if it were that easy, most consumers would press the “Cinema” button if they knew it would keep their movies looking the right way.

Even if you’re a person who doesn’t really about visuals and you only care about the story, you should still fight for this cause because the visuals are there to set the mood for you to get into the story.

As someone so eloquently put it in the comments section of this petition, “Smooth motion kills emotion.”