Five Questions for Sam Green About His Live Documentary, The Measure of All Things 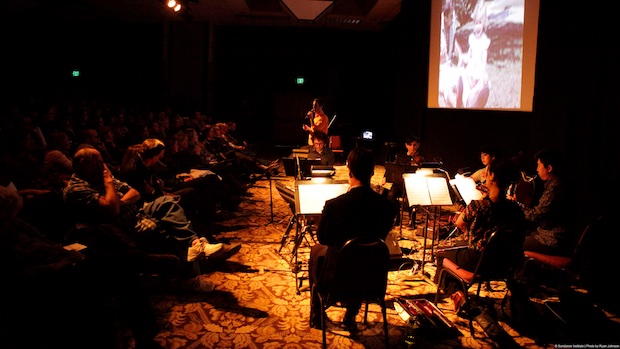 The Measure of All Things Sundance Premiere. (Photo: Ryan Johnson)

The biggest, the smallest, the most, the more-times-than-anyone-else — filmmaker Sam Green has revisited a common childhood fascination, The Guiness Book of World Records, for his latest “live documentary,” The Measure of All Things, receiving its New York premiere at The Kitchen this week. It’s Green’s third work combining film, music and his own on-stage narration — a hybrid film/theater form that’s proved surprisingly popular in performing arts venues around the world. Indeed, when so many filmmakers are trying to figure out a “new model” for their work, Green has turned himself into a touring artist, finding new, less jaded audiences for his wonderfully essayistic work. Below, we asked Green about his development as a performer, that touring model and whether or not he’s planning to turn this latest work into a solo feature film.

The Measure of All Things runs Friday and Saturday, November 20 and 21st, and tickets can be purchased here.

Filmmaker: Your new “live documentary” deals with record holders, who include, according to The Kitchen’s blurb, “people, places and things.” What connects them, particularly the animate and inanimate?

Green: Like a lot of kids, when I was around eight or nine years old, I was crazy about the Guinness Book of Records. I would sit for hours looking through it, and many of those photos are still seared into my consciousness: the lady w/the smallest waist, the fattest twins on motorcyles. A couple of years ago, I came across an old paperback copy of the book – probably from around the time that I would have been reading it as a kid – and was struck by how weird it all was. Sure, there were some silly records – the world’s largest pizza and that kind of thing – but many of the records in Guinness seemed to be little poems or parables about the mysteries of being alive: the man who was struck by lightning the most (seven times!) but ended up taking his own life because he was unlucky at love. The person with the longest lasting case of hiccups (68 years), the lowest grossing movie (Zyzzyx Road – gross domestic box office: $30). I suddenly saw the Guinness Book of Records really as a kind of weird self-portrait – an attempt to measure and catalog the outer edges of the human experience and through all that to make some sense of who we are. So with this film, The Measure of All Things, I created a poem of different records that resonate along these themes. There are people but also objects like the oldest living thing (a 5,000 year old pine tree in Southern California) and the Gateway arch in St. Louis (the tallest monument ever built). The connection is that taken together, they represent a kind of poem about time and fate, human folly and the mysteries of being alive.

Filmmaker: This is your third live performance work. Did the state of the independent film economy have something to do with your decision to develop and explore this other form of work? And now that you are several years in, what are your reasons for continuing to work in this field as opposed to making these projects as films?

Green: I was drawn most to this form for aesthetic reasons. Like many filmmakers I was ambivalent about the idea of people watching my movies on a small laptop screen while checking Facebook. I’m not a Luddite, but there is something profound about the theatrical cinematic experience that gets lost when one watches a film in the crappy way that many of us do (I’m as guilty of watching films on my computer while occasionally checking email as the next person). I love the magic of cinema – that feeling when you sit in a room with strangers, the lights go down, and you give yourself over to the experience completely. The context in which we watch a film plays a huge part in shaping the experience of that work. So I was initially drawn to this live form of showing films as a way to go deeper into the theatrical experience of cinema.

With the first live film I did, Utopia in Four Movements, we premiered it at Sundance in 2010, but I had no idea what I would do with the film after that. I wasn’t aware of any kind of circuit or market for live films out there. But it turns out that in some ways there is. We ended up doing tons of shows all over the world with that piece – many of them were in performance contexts, places like performing arts centers and museums. I was pleasantly surprised that in that world there is still an intact economy and performers get paid. Meanwhile, in the film world, as we all know, the bottom has dropped out. My old friend, the underground film legend Sarah Jacobson, used to say that the film world is always a couple of years bend the music world in terms of the business, and it’s true. No bands make money selling records anymore unless you are Lady Gaga – they all have to tour. That’s where the money is. And in some ways, I stumbled onto a similar situation with film. As I mentioned, that’s not what primarily draws me to this live cinematic form, but making a decent amount of money from my work is helpful. Like many of my colleagues, I am struggling to figure out how to make a living as filmmaker at a moment when the business is going through such radical changes.

Filmmaker: What are you doing differently this time, and what other forms will The Measure of Things take? I understand you won’t be doing a film version, but what about other media? Books, podcasts, etc?

Green: I’ve kept coming back to this live documentary form because I continue to be curious about what it can do and ways that I can push it further. There’s so much potential for creating a huge and immersive cinematic experience. I’m working with two different bands on this project — the chamber group yMusic and a trio made up of Brendan Canty (Fugazi), Todd Griffin, and Catherine McRae — and my goal was to have both of them literally blow the lid off the venue with a big sound. I came across yMusic when I saw them play a concert with the Dirty Projectors at Carnegie Hall and was knocked out by how enormous a sound they could make. So with The Measure of All Things I’m trying to make as immersive an experience as possible – to have the live music and huge images literally enthrall the audience.

I don’t have any plans to create a “regular” film version of this piece, but with Utopia in Four Movements, for example, I “spun off” some segments as traditional short films. I might do the same with this new piece. There are a few records that are touched on in The Measure of All Things that I’m fascinated by and might turn into stand-alone films. Particularly, the oldest person in the world, which is a fascinating record because it’s constantly changing, and the oldest person in the world is almost always so old that he or she is a weird Yoda-like figure. This piece also touches on the Voyager spacecraft/Golden Record (the furthest human-made object from earth), which is something I’ve always been completely smitten with and hope to make a traditional film about at some point.

Filmmaker: How do you feel you’ve grown as a performer over the course of these pieces? And how are you honing that aspect of your work?

Green: It’s funny – I’ve never felt like a “performer.” Like most documentary filmmakers, I am curious about the world but think of myself as a shy person at heart. Documentary filmmaking has always been a way to engage with the world, but to do so while hiding behind a camera and filmmaking. So getting up in front of audiences is scary for me! Over time, I have gotten more comfortable with it, and I feel like I am able to do a reasonably good job. With The Measure of All Things, I worked with a dramaturge, which is basically a theatrical term for a collaborator, and that was a big help. In many ways, I’m just “performing” myself with these pieces.

One of the really interesting things about this form for me though is that you can hone a piece over time. Unlike “regular” films, I keep tinkering with a piece as long as we screen it. So with The Measure of All Things we did a show at Duke this last weekend, and I completely re-worked the first ten minutes of the piece. I think it works way better now.

I once heard an interview with the comedian Aziz Ansari in which he talked about how he does several shows a night in different comedy clubs to hone his act. And in many ways, this is a similar process. It’s very hard to know exactly how things will work without an audience. And when you are in front of an audience, it’s really easy to tell if something is working or not – you can clearly feel people’s response and engagement. So that is actually great fun, to constantly tinker with the piece and fine-tune it.

Filmmaker: What are the elements of funding a work like this? I know you did a Kickstarter, but, aside from that, how are you finding financing? And are there sources of financing that wouldn’t be open to you if you were doing a feature film?

Green: There is a parallel universe of funding for this kind of live work – maybe not quite as fertile a terrain as with traditional documentary filmmaking, but there are some grants and other funding. For The Measure of All Things, in addition to doing a Kickstarter campaign (ugh), early on I got a grant from the National Endowment for the Arts – they have a “multimedia” round of funding. There are also very competitive performing arts grants like the MAP, which I have not yet gotten. Also, within the performing arts there is a model where presenters commission work. That is also something I’m hoping to explore with my next project.